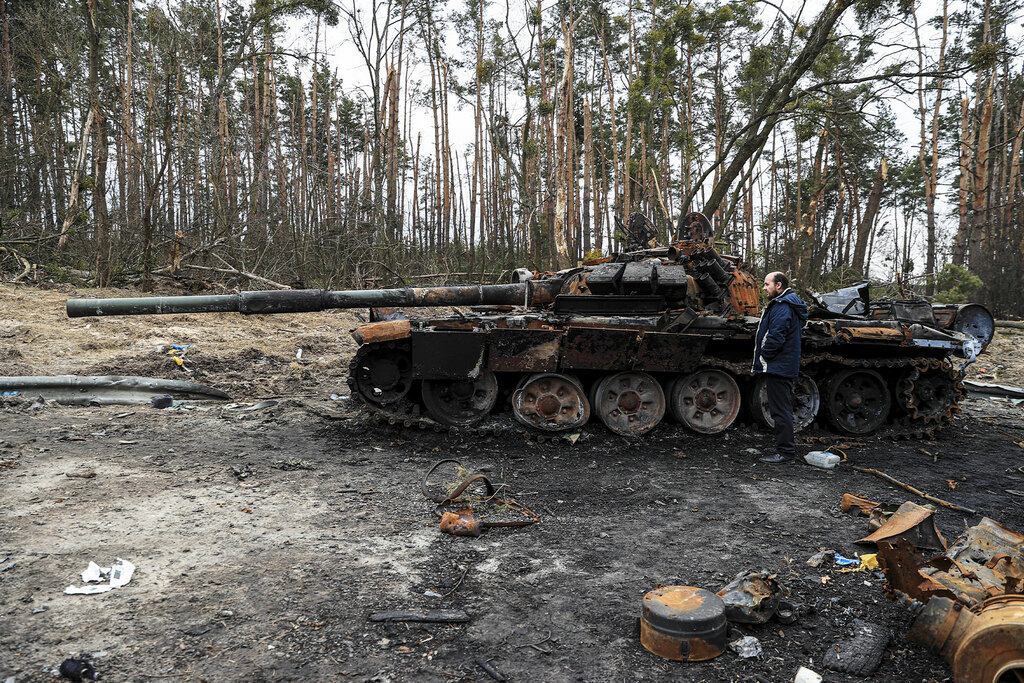 Irish Independent
One subscription that gives you access to news from hundreds of sites
Russia's invasion of Ukraine at 'bit of a stalemate' -U.S. intel official

Russian forces pounded areas in Ukraine’s east on Thursday, including the last pocket of resistance in besieged Mariupol, as a…

Before Russia’s invasion of Ukraine on Feb. 24, 2022, many observers looked at Russia’s overwhelming combat power and thought Russia would achieve a quick victory.

Because Russia has a US$62 billion defense budget and holds numerical advantages in weapon systems such as tanks, artillery, attack helicopters and planes, many analysts asked not whether Russia would win but rather how quickly it would do so.

What these observers and less experienced analysts are not taking into account is that wartime performance is influenced by more than how weapon systems function.

Success in battle is also a function of strategy, operational employment, doctrine, training, leadership, culture and the will to fight.

Russia held and continues to hold an overwhelming numerical advantage in manpower and weapon systems, but Ukraine holds the advantage in every other factor.

Ukraine’s military competence goes a long way to explain why Russia failed to seize Kyiv and Kharkiv and why Russia’s attempts to seize the entirety of the Donetsk and Luhansk provinces in its latest offensive in the east will likely fail.

Following its miserable performance in 2014 against Russia, when demonstrations by pro-Russian groups in the Donbas region of Ukraine escalated into a war between the Ukrainian military and Russian-backed separatists, Ukraine conducted a comprehensive review of its security and defense establishment.

The ensuing report led former president Petro Poroshenko to enact the Strategic Defense Bulletin of Ukraine in May 2016.

The bulletin mandated broad and sweeping reform across the defense establishment, with the goal of producing a force capable of performing up to NATO standards by 2020.

Over the next six years, Ukraine reformed its military with the help of Western advisers, trainers and equipment. From 2016 to 2018, I served as the executive officer to the U.S. senior defense adviser to Ukraine and was able to witness some of these reforms.

In that position I met with dozens of members of Ukraine’s security establishment, including then-President Poroshenko and then-Defense Minister Stepan Poltorak.

It was clear that Ukrainian leaders feared a large-scale Russian invasion, and they knew they had little time to make difficult reforms in five categories: command and control, planning, operations, medical and logistics, and professional development of the force.

By the time Russia invaded Ukraine on Feb. 24, Ukraine had built a well-led, professional force with a culture that encouraged junior leader initiative on the battlefield.

These initiatives occur when original battlefield orders are no longer relevant or fit the changing situation.

Before reforms were enacted, the lieutenants and captains who were conducting the fighting on the ground were unable to make decisions and were required to seek permission before they could act.

Benefiting from eight years of fighting in the Donbas and six years of Western trainers and advisers, Ukraine’s military in 2022 wasn’t the same as it had been in 2014, much to Russia’s surprise.

In fact, it was far superior to Russia’s military in nearly every measure but size.

As a result, Russia’s latest invasion pitted a large but poorly trained force against a much smaller but well-trained, well-led and motivated force.

Russian levels of troops and equipment also remain constant – and their poorly led forces cannot be fixed in weeks or months.

It took Ukraine six years to reform its military.

Many media reports have focused on the fact that Russian forces’ moving from the north of Ukraine to support operations in the east will increase Russia’s likelihood of success of occupying Ukraine’s eastern region.

Yet, what is often ignored is that Ukraine is also able to move forces east. Sure, a small element of Ukrainian forces will remain to defend Kyiv.

But others will move east, meaning the overall ratio between Russian and Ukrainian forces is unlikely to change much unless Russia decides to ship in even more troops.

Likewise, Russia does not seem capable of changing how it employs its troops when they meet stiff Ukrainian resistance.

Although much was made of the appointment of Gen. Alexander Dvornikov to command Russian operations in Ukraine, his promotion seems to have changed little on the ground.

Operations over the past few weeks have demonstrated that Russia is still incapable of executing large-scale attacks that result in Russian control over Ukrainian territory.

The only real change that gives hope to Russia is the geographic terrain.

The land in the north of Ukraine consists largely of wetlands, which forced Russia to stick to the roads and thus limited the number of routes it could use to advance on Kyiv.

The terrain in the east contains more open space and would enable Russia to move its troops and tanks along multiple routes instead of one.

A key to Ukraine’s holding off this much larger force is the ability to rapidly replace military equipment that gets depleted or destroyed.

Western aid since the start of the war in February 2022 has been absolutely critical to Ukraine’s continued success.

Ukraine’s needs have not changed since then.

As Ukraine Foreign Minister Dmytro Kuleba explained during a meeting with NATO officials in April 2022, his wish list “only has three items on it. It’s weapons, weapons, and weapons.”

Ukraine can likely hold out, provided it can get more of everything. But given questions about the continued U.S. supply of Javelin anti-tank missiles, getting more weapons is not a guarantee.

[More than 150,000 readers get one of The Conversation’s informative newsletters. Join the list today.]

Liam Collins does not work for, consult, own shares in or receive funding from any company or organization that would benefit from this article, and has disclosed no relevant affiliations beyond their academic appointment.

Irish Independent
One subscription that gives you access to news from hundreds of sites
Russia's invasion of Ukraine at 'bit of a stalemate' -U.S. intel official

Russian forces pounded areas in Ukraine’s east on Thursday, including the last pocket of resistance in besieged Mariupol, as a…