MINNEAPOLIS — After enduring three consecutive nights next to Ted Nugent's giant stack of Marshall amplifiers, I received a gift from the guitar hero: earplugs.

The Nuge may be tone deaf on some topics, but not about hearing. After all, he is partially deaf in one ear. Protecting his ears is essential. He opened a drawer in a roadie case and handed over my first pair of plugs — Super Sonic II.

That was 1976, and I've worn earplugs ever since. Not those foam ones; they block out the sound. No, more sophisticated ones. Like those old Super Sonic II, inch-long flanged rubber with a little metal diaphragm to cut down on the high frequencies. They may look dorky — like something protruding from Herman Munster stuck in your auditory canal — but they serve an invaluable purpose.

My ears aren't ringing when I hit the pillow after a rock concert. Or the next morning.

I'm not going to get all scientific and talk about how rock concerts are typically blasting at 105 to 110 decibels, which is way louder than advisable. Good earplugs — not the free ones available at Minneapolis clubs mandated by a 2014 ordinance — enable you to hear the music clearly but diminish all frequencies, from treble to bass, that can cause ringing and permanent hearing damage.

High frequencies at high volume have punished countless musicians — the Who's Pete Townshend, Foo Fighters' Dave Grohl, and even Barbra Streisand, to name a few — resulting in tinnitus (a constant ringing in your ears).

More than 45 years and 9,000 concerts after my close encounter with the Nuge, my ears are fine, according to my audiologist, though some readers might disagree.

I wear earplugs at every concert (and at sporting events) unless it's all acoustic instruments. There's no need to be macho or ashamed about this. Smart musicians protect themselves with either custom-made plugs (molded to fit their ears) or in-ear monitors for which they can control the volume.

I've graduated from Super Sonic II to more comfortable, sensitive and less obtrusive — and less dorky — earplugs. And they have sexier names like Eargasm and Earasers. Sure beats words like tinnitus and hearing aids.

Splurge if you like for custom-molded earplugs, which typically start at about $100 a pair. There are other quality, reusable prophylactics available at modest prices that will let you hear all the necessary nuances at concerts without your ears ringing afterward.

Here is a sampling, with manufacturer's listed prices.

Earasers. My go-to plugs for several years, they're small, clear silicone, contoured to your ears, with a tiny filter and a small pull to help remove them. Available in small, medium and large, they are discreet and comfortable. Caveat: I've had them fall out without realizing it, leaving me with an orphaned earplug. Reduction: 19 decibels. $49.99, earasers.net

Vibes Hi Fidelity. Despite being turned down on "Shark Tank" in 2017, these plugs from a Minneapolis-based company have prospered. With a round silicone ball on the end of a straight plastic stick, they have a special filter. "It looks like you have a piece of plastic jewelry in your ear," said the dude next to me at a recent concert. Each one comes with three interchangeable sizes for either ear. Reduction: 15 decibels. $26.95, discovervibes.com

Fender Professional Hi-Fi. A product from the well-known guitar maker, these remind me of my old Super Sonic II except they're clear, not tan, straight flanged silicone plugs with a little plastic pull. With two interchangeable-sized tips, they fit snugly but look a bit outré. Their cool carrying case resembles an oversized guitar pick. Reduction: 20 decibels. $29.99, fender.com

Earos One. Conceived by a former director of MIT Acoustics and Vibratory Lab, these black flanged cones fit tight. At the outer end is a flat black plastic "concha pad" to help secure them specifically in your left and right ear. Looks like you're wearing earbuds. Comes with one set of extra cones. Reduction: 17 decibels. $40, earos.com

EarLabs dBud. These Swedish-designed plugs are ambitious. Their special feature is two settings: Louder is bright (11 decibels reduction), loud is slightly muted (24 decibels reduction). These black silicone-and-foam devices fit like earbuds, attached by an annoying thin black cord so you won't lose them. They come with three pairs of foam ear tips in small, medium and large. The soft rubber carrying case does not close snugly so the plugs can get dusty. $59, dbud.io 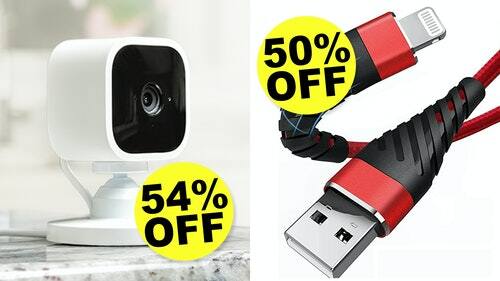 Amazon Prime Day's Deepest Discounts
There are serious sales already live on the site, days ahead of Prime Day 2022.

Just remember: these deals won’t last long. So if you see something you like, act fast. And be sure to…

Home upgrades don’t have to come with a huge price tag, dust, and three weeks with a non-functioning kitchen. Some…

Prime Day 2022 is almost here but some of the best deals are already live.

Inverse
‘An old strain of English magic had returned’: stars on why they fell in love with Kate Bush

As a new generation continues to discover her via Running Up That Hill, musicians including Sharon Van Etten and Brian…

You'll wonder how you ever lived without these totally clever things.