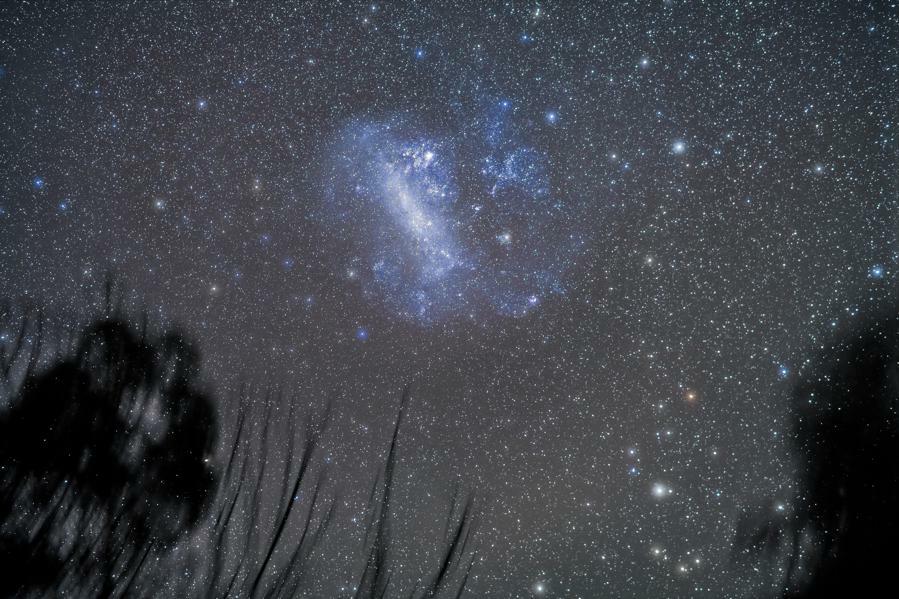 After a decade of delays and a nail-biting two weeks the James Webb Space Telescope (JWST of just “Webb”) is deployed. Already halfway to its destination a million miles from Earth it will now undergo a prolonged commissioning and testing—and that will involve “first light” images. What will Webb be pointed at, why and when?

Details are still emerging, but we now know that pretty soon Webb will be pointed at targets in the Large Magellanic Cloud (LMC), a satellite galaxy of the Milky Way. However, that will happen only after its first blurry images are inspected during a long mirror alignment process.

Here’s everything you need to now about Webb’s first targets and what to expect from its first images:

What does ‘first light’ mean?

There are actually two meanings of “first light” when talking about Webb.

The phrase “first light” is used by astronomers when they begin observations on a new telescope, whether it’s ground-based or—like Webb—observing from space. Technically speaking the first photons of light are already moving around Webb’s optical system, but what’s meant by “first light” is either the first test images or the hand-picked, likely jaw-dropping images that a telescope’s science team releases to announce that it’s begun its observations.

Why Webb’s very first images will be blurry

Testing Webb’s 21 feet/6.5 meter beryllium mirror—made up of 18 hexagonal gold-covered segments—is going to be a complicated and slow process. “When we take what we call the “first light” of the telescope we are expecting to see 18 separate spots that are probably going to be pretty blurry because everything’s going to be misaligned,” said Lee Feinberg, Optical Telescope Element Manager for the James Webb Space Telescope at the NASA Goddard Space Flight Center, in a press briefing Saturday. “It will be like having 18 separate telescopes.”

The first thing engineers will to have to do is to align Webb’s individual primary mirror segments and then to take those 18 images and stack them on top of each other. Stacking, an integration technique used in astrophotography of all kinds, reduces the unwanted noise within images. “At that point a star won’t quite look like a star—it’s still going to be very blurry,” said Feinberg. “We then have to align the mirrors to the point at which they’re actually aligned to a fraction of a wavelength of light.”

Engineers will then use a series of algorithms—created very early in Webb’s development program—to complete the alignment. “This will be the first time that we do it on the flight telescope with real stars, so we’re all excited,” said Feinberg. “It’s a little bit of a long process, but at the end of it we expect to see an image of a star that looks like a star.”

That will be a critical point—but it won’t be very interesting to most people.

When will Webb take its first images?

NASA estimates that it could take up to 120 days after launch for Webb’s mirror alignment work to be complete. Given that Webb launched on December 25, 2021 that’s April 24, 2022. So Webb will likely be pointing at stars and seeing its “first light” six weeks before that—around mid-March. However, NASA says not to expect the first “showpiece” photos from Webb until about five months after launch, once commissioning ends. That’s about May 24, 2022.

So whether we’ll see any of Webb’s first test images of stars is doubtful. It’s more likely that NASA will publicly release a set of beautiful “first light” photos all in one go during May or June 2022.

What stars will Webb look at first?

Webb’s very first test targets will be some stars that are the correct brightness that the team needs to help align the mirrors. A list of target stars exists, but it’s not being made public. “They’re fainter than your eye can see, but not by a whole lot—they’re reasonably bright stars,” said Jane Rigby, Webb Operations Project Scientist, NASA Goddard Space Flight Center, in the press briefing Saturday. “So for the first part of telescope alignment, that’s it—we look at some stars. That’s kinda boring, but important.”

What galaxies, nebula and star clusters will Webb look at first?

Once the mirrors have been aligned it’s time to do something a lot more exciting—point Webb at its first non-star targets. This is where the four science instruments on Webb get tested to see if they’re working correctly. It will take place during the last six weeks of the six month process—so late March and most of April 2022.

“Then we start looking at a larger variety of targets,” said Rigby. “Those targets are chosen not because they’re scientifically amazing, but because they’re useful.” Here NASA will be checking things like wavelength calibration (measuring a spectrum with known wavelengths) and pointing Webb at some targets that have a uniform brightness to check how its detectors are working.

We now know that many of Webb’s first test images will be of objects within the Large Magellanic Cloud (LMC).

What is the Large Magellanic Cloud?

About 170,000 light-years away from Earth, it’s a dwarf galaxy that orbits our Milky Way galaxy will be absorbed by it in 2.4 billion years.

The Large Magellanic Cloud (LMC) and the nearby Small Magellanic Cloud (SMC) are dense star-fields that appear to the naked eye as fuzzy patches. Although they’re both circumpolar, they’re best seen from equatorial regions and the southern hemisphere when highest in the sky on a dark, moonless night between September and April. They’re found between the stars Canopus and Achernar.

They were named after Portuguese explorer Ferdinand Magellan, who spotted them in 1519 while circumnavigating the globe for the first time.

Why will Webb be trained on the LMC?

The LMC was chosen by NASA engineers as the primary target for Webb during commissioning because it was always going to be visible whatever time of year Webb eventually launched. “We can always see the north and south ecliptic poles—they’re always available,” said Rigby. “So looking out of the plane of the Solar System up and down, a lot of our targets for commissioning are there because then we didn't have to keep replanning if the launch date changed.”

The LMC is close not only to the south celestial pole, but also to the bright center of the Milky Way. It’s stuffed with incredible astronomical targets.

What’s the one big astronomical target in the LMC?

Aside from its estimated 30 billion stars the most famous target is the Tarantula Nebula. About 160,000 light-years distant, it’s a famous target for astrophotography. Best thought of as a super-massive version of the Orion Nebula, it’s is one hundred times larger and the biggest star-forming region in our part of the Universe. It’s so luminous that if it was as close to us as the Orion Nebula is (about 1,300 light years), it would cast a shadow on Earth at night according to NASA.

It’s very possible that Webb will be pointed at the Tarantula Nebula during testing.

What else could Webb be pointed at in the LMC?

For an irregular satellite galaxy the LMC has some incredible targets for Webb’s engineers to test its instruments on. They include: