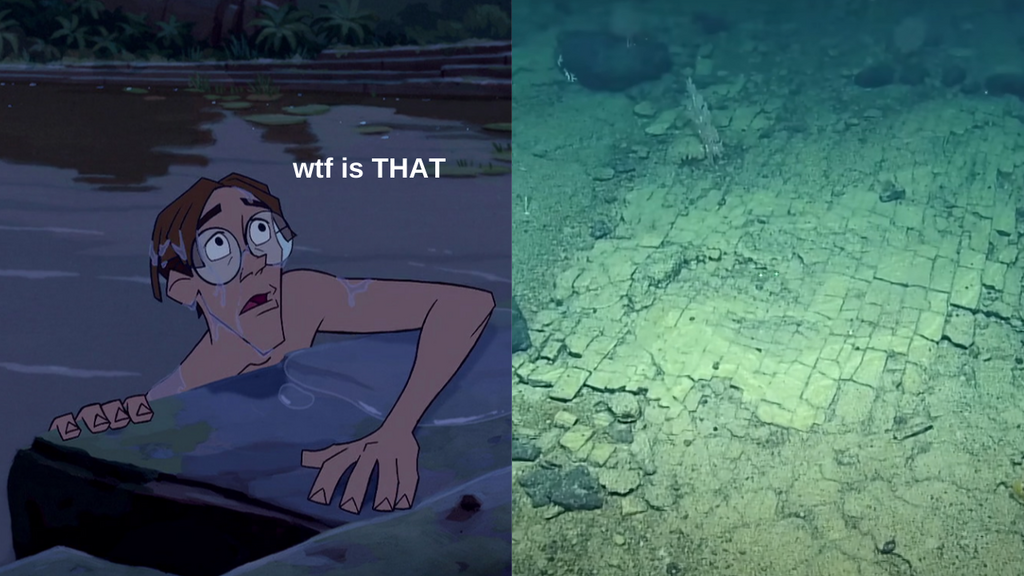 Ocean Researchers Found A Mysterious ‘Road To Atlantis’ Suddenly I’m In My Milo Thatch Era
Get me in a submarine toot sweet.

Pedestrian.tv
Mysterious yellow brick road is discovered at the bottom of the ocean

For years, Dr. Donald Cline got away with using his own sperm to inseminate his patients without their consent

Salon
Netflix documentary labelled 'most ****** up' ever by viewers on Twitter

Sri Lanka is sliding into a default as the grace period on two unpaid foreign bonds ends on Wednesday, the…

Why The Titanic Wreck Discoverer's Mom Was Worried

After finding the remains of the legendary lost luxury liner, a search that stymied other explorers for decades, his mom lamented: "Now they're only going to remember you for discovering that rusty old boat."

But that doesn't bother Ballard. His parents fostered his love of the ocean since the first time he saw it after moving to San Diego. He was born in Wichita, Kan., but the family moved to Southern California after World War II when he was young.

We lived 10 feet from the ocean, and back then all they said to me was, 'Be home before dark.' So that was my playpen," said Ballard, now 79.

And Ballard took full advantage of having the sea at his feet. Yes, he's most famous for finding the Titanic's ruins in 1985. But he's also president and founder of Ocean Exploration Trust, explorer at large at National Geographic, and professor of Oceanography at the University of Rhode Island.

Ballard also helped prove the theory of plate tectonics and continental drift. This theory still underpins our understanding of how the earth was shaped. He discovered "giant chimneys" that spew out "a crystal clear liquid." This cleared up questions that puzzled scientists about the ocean's chemistry.

And perhaps most important, he found thermal vents off the Galapagos Islands. This shows life could exist without sunlight, raising the possibility that "we can live in much more hostile terrain" in outer space, he said.

Ballard's success in real science, though, started with science fiction.

After watching Disney's 1954 film "20,000 Leagues Under the Sea," at age 12, Ballard felt his calling. And his parents took it seriously.

"My parents asked me what I wanted to be when I grew up, and I said Captain Nemo," said Ballard, referring to the fictional captain from the movie who commanded the submarine Nautilus. "They didn't laugh. You should never laugh at a child's dreams, even when they're stupid like mine."

Ballard: Take Advantage Of Your Environment

Ballard's parents pursued his spark of interest to expose him to real marine science.

"They asked me what I liked (about the Nautilus), and I said the window. They said that sounds like an oceanographer," he said.

So, right down the street, "minutes from where I was living, was Scripps (Institution of Oceanography), the largest oceanographic institution in the world," Ballard said. "They took me there, and I met a lot of people."

And soon Ballard followed his own passions. "When I was 17 I got a scholarship (at Scripps) to go on my first cruise," he said. "We got hit by a rogue wave, almost capsized and had to be rescued by the Coast Guard. I thought that was cool."

Ramp Up Your Education

Ad hoc learning was fine at first. But Ballard knew that to accomplish great things, he needed a formal education.

Ballard did his undergraduate work at the University of California at Santa Barbara, participating in then-mandatory ROTC training. He earned a degree in physical science with a double major in chemistry and geology. Graduating in February 1965, his call to active duty in military service was delayed so he could attend graduate school.

But his studies were also interrupted one evening when a naval officer knocked at the door. "He had an envelope. And you should never take an envelope from a stranger," Ballard said.

The letter asked why someone studying for a Ph.D. in oceanography was in the Army. He was commissioned to the Navy and assigned to the Woods Hole Oceanographic Institution in Cape Cod, Mass. "I'd never heard of the place."

It turned out to be fortuitous. Many of Ballard's discoveries both in the ocean and out, including the Titanic find, resulted from using underwater robots as cameras. He learned about both with Woods Hole and the Navy.

Even Ballard's search for the Titanic was just a cover mission while at the Navy. "I can tell you what was declassified," he said.

During the Cold War, the Navy "lost" two nuclear submarines, the USS Thresher and USS Scorpion. Ballard was to find the nuclear subs and figure out if the Russians had seen them first. "I can't tell you how," he said.

Ballard came up with the Titanic search as a reason to be searching the sea floor. People sought the lost ship almost nonstop since it sank in 1912. So Ballard mapped out ocean currents, figured out approximately where the debris should be and in relatively short order discovered the Titanic.

By Admiralty Law, Ballard owned the ship and everything on it, if he raised it, since he found it. But he refused, despite legends of it being filled with gold. "I think it's a grave," he said. "There's nothing to learn. There are things more important than money. I wouldn't salvage it."

Make Your Challenges A Strength

Ballard has no interest in routine. "I'm very unconventional," Ballard says. "I think it's because I'm dyslexic. I don't like the rules of the non-dyslexic world."

He didn't realize he was dyslexic until his daughter was diagnosed with the condition. Then his difficulties growing up made sense. "I survived my educational experience by coping mechanisms: studying longer, memorizing, whatever it took," he said.

He turned what many consider a negative into a positive force. "I'm honing in on what I'm really good at. In the old days, I'd probably try to do what I'm not good at," he said.

What is he bad at? "The details. Digging into the (nitty-gritty). I'm not patient. I'm disruptive. They have meetings without me and tell me what they concluded. I like one-on-ones, two-on-ones. I'm not comfortable in large groups," he said.

Adapt Your Style To Lead

Ballard looks to inspire people who work with him —not to manage them.

That's jarring to some people who work for him. "One man, an ex-Navy commander, said you're not calling me a lot," Ballard said. "And I said, yeah, that's because you're doing great."

Ballard said his management skill is to inspire and hand off tasks. "This is the hardest part: know that they are going to do it slightly different than you would and be OK with that," he said.

Ballard, though, isn't interested in small developments. "If you climb a 24,000-foot mountain and fall off, you'll be dead. But if you fall off a 100-foot ladder, you're also dead as a doornail," he said. "Why do you want to climb a little ladder, because it's cluttered with people? Very few people are climbing tall mountains."

Lawrence Mayer, marine geologist and director of the Center for Coastal Mapping at the University of New Hampshire, has worked with Ballard for 25 years. "I never thought of him as a manager. That's the interesting thing. I think he's a brilliant explorer. A brilliant scientist," he said.

But Ballard knows how to get results. "He surrounds himself with excellent people, because he knows he can't do everything, and his ability to engage with those people and inspire them, that's part of it," Mayer said.

The only limits Ballard imposes on himself are the laws of physics.

While searching for funding for an undersea exploration, Ballard presented his idea for a remote-controlled submersible robot that takes pictures to the National Science Foundation. They said no.

"They said you are nuts. I asked what law of physics did this violate. They couldn't find any, but said doing this would be tough," Ballard said. "Why do you want to do something easy?"

Ocean Researchers Found A Mysterious ‘Road To Atlantis’ Suddenly I’m In My Milo Thatch Era
Get me in a submarine toot sweet.

Pedestrian.tv
Mysterious yellow brick road is discovered at the bottom of the ocean

For years, Dr. Donald Cline got away with using his own sperm to inseminate his patients without their consent

Salon
Netflix documentary labelled 'most ****** up' ever by viewers on Twitter