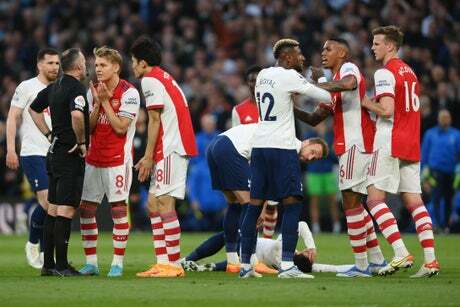 Arsenal legend Ray Parlour thinks that Son Heung-min gave Rob Holding an 'elbow' in Thursday night's North London Derby, which angered the Gunners centre-back, who went on to be sent off inside 33 minutes at the Tottenham Hotspur Stadium.

Victory for Arsenal would've meant that the Gunners secured Champions League qualification at Tottenham's ground. Thus, it was a must-win game for Spurs, but the Lilywhites delivered under the highest pressure. Two first-half goals for Harry Kane meant that Antonio Conte's side went into the half-time break in cruise control. They were helped by the fact that Gunners centre-back Rob Holding was sent off in the 33rd minute for a second yellow card offence.

Son wrapped things up almost immediately after the restart as Spurs eased to three points. Victory means they now trail their arch-rivals by just one point with two games to go in the race for the top four.

Although Tottenham put in a dominant performance, the moment that pretty much changed the game was the sending off, but Parlour thinks that Holding was a little erratic because Son appeared to elbow him in one of the early tussles between the two.

Parlour said on talkSPORT (6:43am, May 13, 2022), as cited by HITC: "When he was on the floor. I think this was the first one, he was holding onto him, and he just gave him a little elbow. I don't know if you saw it. No one saw it, to be fair. Maybe that's a reason he was a little bit highly strung through the game, Holding, because he got an elbow."

The sending off killed whatever momentum the Gunners had left as Tottenham went on to secure an easy three points. That being said, Holding arguably should've controlled his emotions a little bitter in such a big game - especially as he's one of the more experienced players in such a young Arsenal team. Luckily for Mikel Arteta, it's still in Arsenal's hands as victories against Newcastle United and Everton will send them to the Champions League next season.