Why Nothing Can Replace Large-Deck, Nuclear-Powered Aircraft Carriers In U.S. Strategy 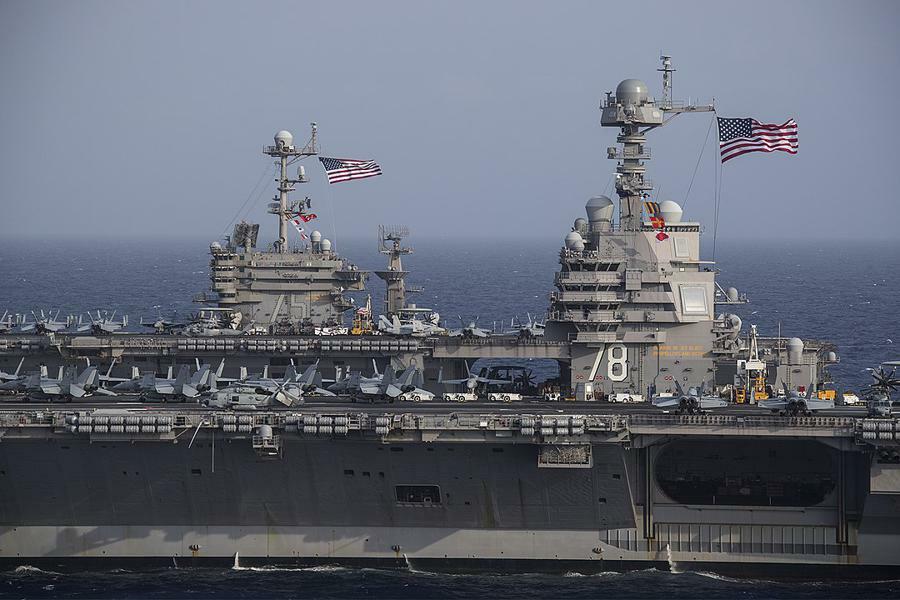 On the day that America observed the 20th anniversary of the 9/11 attacks, its most potent tool for responding to future such assaults was operating near the places they are most likely to originate.

The USS Ronald Reagan, hosting 90 strike fighters and other combat aircraft, was underway in the North Arabian Sea, near the mouth of the Persian Gulf and within easy reach of Afghanistan.

Accompanied by two guided-missile warships and continuously updated by overhead intelligence, the Reagan could have answered any terrorist provocations within hours.

Meanwhile, a second Nimitz-class carrier, the USS Carl Vinson, was underway in the other area of greatest concern to U.S. military planners: the South China Sea.

It too hosted 90 combat aircraft that could have responded within hours to Chinese military moves around Taiwan or elsewhere in the region.

Relatively few Americans outside the naval community likely were aware that the carriers and their escorts were forward-deployed near potential aggressors.

U.S. carrier deployments are so routine that they seldom elicit notice in national media.

But there is nothing routine about the military power they provide to U.S. forces and overseas allies.

In any conflict short of nuclear war, America’s 11 large-deck, nuclear-powered aircraft carriers are by far the most lethal combat systems available for action.

In fact, they are so lethal—capable of precisely destroying hundreds of targets every day for months if necessary—that they probably have done more to deter aggression than any other military system in U.S. history.

The presence of a U.S. carrier nearby tends to focus the thinking of potential enemies in a way that few other weapons could.

But this story is seldom told in national media, so it is useful to occasionally review what it is that makes large-deck, nuclear-powered carriers special.

Here, in the simplest terms, are the five features that explain why carriers like the Reagan and Vinson are indispensable in national strategy.

Unique capacity. A large-deck carrier is essentially a floating air base, capable of being moved anywhere at a speed of over 700 miles per day. Its carrier air wing consists of nine squadrons, including not only multirole fighter-bombers but also electronic attack jets, radar planes, and various rotorcraft.

The Navy’s F/A-18E/F Super Hornet is the most successful sea-based strike fighter ever built, able to deliver nine tons of ordnance with pinpoint accuracy against targets on land or at sea over 400 miles distant, while also sweeping the surrounding airspace of threats.

The F-35C fighter that the Vinson is carrying on its first operational deployment has a similar payload while offering greater reach and advanced stealth—making it largely invisible to enemy radar.

The EA-18G electronic attack jets, based on the Super Hornet airframe, can suppress the most advanced radar and communication systems of adversaries, while the E-2D radar plane can track hundreds of aircraft, both hostile and friendly, at great distances.

The ability to position such assets within reach of overseas adversaries without requiring vulnerable land bases or the permission of local political leaders confers unique operational flexibility on the U.S. Navy.

And the new Ford class of carriers, successor to the Nimitz class, will increase the number of sorties that each carrier can support by a third—to 270 per day during combat. With each strike fighter carrying multiple precision-guided munitions, that is unparalleled combat power.

Unique endurance. Large-deck, nuclear-powered carriers are not like other warships, which can easily deplete their munition magazines during a few days of intense combat. Nimitz- and Ford-class carriers are designed to stay deployed in combat zones for months, steadily generating aircraft sorties in support of the joint force.

Nuclear power enables the carrier to maneuver continuously, while vast onboard storage areas afford space for three million pounds of aviation fuel and diverse munitions inventories. The ship can distill 400,000 gallons of fresh water from the sea every day, and keep sailors fed for 90 days—even though 18,000 meals must be served every day.

If munition stores or other supplies are depleted by intense activity, nuclear power enables the carrier to dart out of the combat zone, replenish at sea, and then quickly return to action. For the most urgent needs, a new class of onboard delivery aircraft based on the V-22 tiltrotor further enhances operational flexibility.

Unique survivability. It is sometimes alleged that the huge size of the carrier—over a thousand feet long, standing 20 stories above the waterline—makes it vulnerable to attack. Actually, the exact opposite is true: with extensive armoring and hundreds of watertight compartments, nothing short of a nuclear weapon is likely to sink it. That makes it the most survivable surface warship in the world.

Before the carrier can be targeted it has to be found, which is no simple matter when it is constantly moving and the joint force is targeting an enemy’s tracking systems (including those in orbit). In addition to its air wing and defensive weapons, the carrier is protected by Aegis guided-missile warships sporting the world’s most advanced air and missile defense system.

The Navy believes its carriers today are less vulnerable than at any time during the Cold War. The “kill chain” of steps required to find, track and target a carrier is so complicated that it offers many opportunities for defenders to disrupt enemy plans, using both kinetic and non-kinetic means such as electronic jamming. If damage is sustained, the carrier has robust onboard repair capabilities.

Unique versatility. The carrier’s air wing is inherently versatile. It can be used to attack diverse targets on land and any type of shipping at sea. It can establish air dominance over vast areas, conduct continuous collection of intelligence, coordinate battles involving multiple military services, and support an array of civil missions such as disaster relief.

Most importantly, the fearsome combat power of dozens of strike aircraft equipped with precision weapons bolsters deterrence across the spectrum of warfare, from terrorism to nuclear conflict. Although carriers do not typically carry nuclear weapons, they are quite capable of targeting the strategic systems of other countries, including weapons, communications, sensors and command centers.

Unique adaptability. The Ford class of large-deck, nuclear-powered aircraft carriers was designed to accommodate extensive modifications over its lifetime, in recognition of the pace at which warfighting requirements are evolving. For example, only half of the vessel’s electrical generating capacity is needed to power current equipment, with the rest available for future technology such as high-power lasers.

More generally, the layout and infrastructure of the Ford’s design was conceived to facilitate future flexibility, so that the carrier can be reconfigured to meet emerging threats. The launch and recovery systems for aircraft can handle a wider array of airframes, including unmanned systems, and the onboard networks use a plug-and-play architecture that readily adapts to modifications.

No other combat system remotely approaches the operational potential of a large-deck, nuclear-powered carrier. The Navy fully expects its carriers to continue operating into the next century.