Why Nearsightedness Is on the Rise in Children 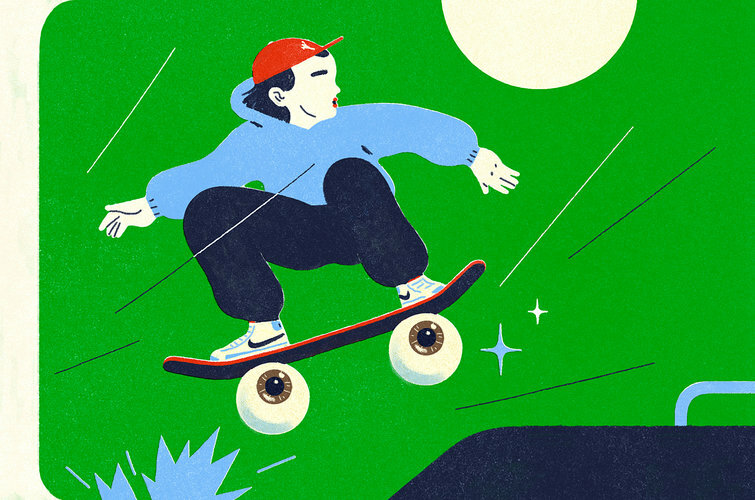 Look and you shall see: A generation of the real-life nearsighted Mr. Magoos is growing up before your eyes. A largely unrecognized epidemic of nearsightedness, or myopia, is afflicting the eyes of children.

People with myopia can see close-up objects clearly, like the words on a page. But their distance vision is blurry, and correction with glasses or contact lenses is likely to be needed for activities like seeing the blackboard clearly, cycling, driving or recognizing faces down the block.

The growing incidence of myopia is related to changes in children’s behavior, especially how little time they spend outdoors, often staring at screens indoors instead of enjoying activities illuminated by daylight. Gone are the days when most children played outside between the end of the school day and suppertime. And the devastating pandemic of the past year may be making matters worse.

Susceptibility to myopia is determined by genetics and environment. Children with one or both nearsighted parents are more likely to become myopic. However, while genes take many centuries to change, the prevalence of myopia in the United States increased from 25% in the early 1970s to nearly 42% just three decades later. And the rise in myopia is not limited to highly developed countries. The World Health Organization estimates that half the world’s population may be myopic by 2050.

Given that genes don’t change that quickly, environmental factors, especially children’s decreased exposure to outdoor light, are the likely cause of this rise in myopia, experts believe. Consider, for example, factors that keep modern children indoors: an emphasis on academic studies and their accompanying homework, the irresistible attraction of electronic devices and safety concerns that demand adult supervision during outdoor play. All of these things drastically limit the time youngsters now spend outside in daylight, to the likely detriment of the clarity of their distance vision.

Recent research suggests that months of COVID-induced confinement may be hastening myopia’s silent progression among young children. A Canadian study that examined children’s physical activity, outdoor time, screen time and social media use during the COVID lockdown in early 2020 found that 8-year-olds spent an average of more than five hours a day on screens for leisure, in addition to screen time needed for schoolwork.

This report and a new study of school-aged children in China after five months of COVID-19 home confinement informed the title of an editorial, “2020 as the Year of Quarantine Myopia,” in the Jan. 14 issue of JAMA Ophthalmology. Researchers from Emory University in Atlanta, the University of Michigan in Ann Arbor and Tianjin Medical University Eye Hospital in Tianjin, China, described a substantial decline in the visual acuity among 123,535 elementary school children following school closures last year from January until June.

Compared to the results of previous annual screenings, the ability to see distant objects clearly had fallen precipitously, especially among those ages 6 to 8. The children became far more myopic than expected, based on changes in acuity that were measured at the start of the school years 2015 through 2019. But a similarly dramatic drop in acuity among older children was not found.

“Given the fact that the younger children were assigned fewer online learning tasks than the older ones, it is unlikely that rapidly progressing myopia in younger children was caused by more intense screen time or near work,” like reading, typing, doing homework or playing video games, the research team wrote in JAMA Ophthalmology. Rather, a lack of exposure to outdoor light is the more likely explanation.

As the editorial writers from Erasmus University Medical Center in the Netherlands suggested, “young children may be more sensitive to myopic triggers from the environment.” An earlier eye study among children in Sydney also found that only the younger ones who became myopic had spent more time on near work rather than being out in daylight.

Although many people have long believed that excessive reading fosters nearsightedness in children, current thinking is that too much time spent indoors has the greater effect and likely accounts for any apparent association between close work or screen time and myopia.

Dr. Neil M. Bressler, an ophthalmologist affiliated with Johns Hopkins Medical Institutions, said that the high intensity of outdoor light has an important influence on the shape of the eye, which in turn affects whether images are seen clearly.

To be in focus, light rays from an image have to converge on the retina. In myopic eyes, the convergence occurs in front of the retina, and a corrective lens is needed to redirect incoming rays so that distant objects are in focus.

Most children are born slightly farsighted. Their eyes are shaped like partly deflated balls, causing images to converge behind the retina. But as they get older, their eyes elongate to form a sphere, permitting images to converge directly on the retina. However, if elongation fails to stop at some point, the eyes become more oval and images then converge in front of the retina, the definition of myopia. Outdoor light stimulates the release of dopamine that may slow elongation of the eye, Bressler said.

Although the rise of myopia is happening worldwide, the epidemic is raging in east and Southeast Asia, where 80% to 90% of high school children are now myopic.

Concern over the increasing prevalence of myopia goes beyond a growing need for glasses, contact lenses or, for those so inclined and who can afford it, laser treatment to redirect images by changing the shape of the cornea. In general, people with myopia are more likely to develop sight-threatening complications later in life like cataracts, glaucoma and degeneration of the macula, the center of the retina.

If the condition becomes extreme, Bressler said, “it can be tough to correct.” The eye becomes stretched, the retina can spread and form scar tissue and the gel in the center of the eye can become stuck to the sides of the eye, causing retinal tears or detachment, he explained.

Such risks are stimulating studies of treatments that might prevent myopia from becoming pathological. One method under study is the use of multifocal contact lenses with high magnifying power to try to slow progression of myopia in children. Another approach, currently considered more promising, is the use of atropine eye drops to minimize undue elongation of the eye. A third approach, called orthokeratology, involves wearing contact lenses at night to change the shape of the cornea, make the edges of the eye more farsighted and perhaps slow the eye’s elongation.

“The pandemic has put fuel on the fire,” Bressler said, “but we don’t have a treatment yet.” Currently, the most effective preventive may be for young children to spend less time on screens and a lot more time outdoors.