Why is Cong. silent over killing of Dalit man in Rajasthan: Mayawati 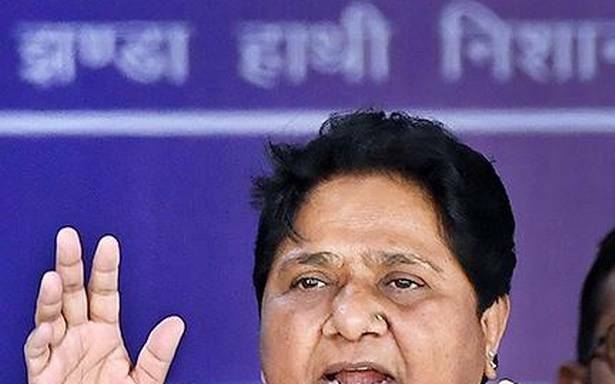 Bahujan Samaj Party chief Mayawati on Sunday termed “condemnable” a Dalit person being beaten to death in Rajasthan’s Hanumangarh, and questioned the silence of the Congress.

In a series of tweets in Hindi, the former Uttar Pradesh Chief Minister said, “A Dalit was beaten to death in Rajasthan’s Hanumangarh. This is very sad and condemnable, but why is the Congress high command silent over it.”

A Dalit man was beaten to death on October 7 by a group of men in Hanumangarh over his love affair. The accused also shot a video of the entire incident in which they are seen giving water to the victim to drink and then thrashing him repeatedly with sticks.

Four people have been arrested and one minor detained for the assault, police said on Sunday. The arrested have been identified as Mukesh Kumar Ode, Dilip Kumar, Sikandar and Hansraj.

A sum of ₹4.12 lakh has been approved by the District Collector as compensation, DGP M.L. Lather said in a statement.

Ms. Mayawati said, “Will the Chief Ministers of Chhattisgarh and Punjab go there and give ₹50 lakh to the victim's family? The BSP demands an answer, otherwise it should stop shedding crocodile tears in the name of the Dalits.”

On the Lakhimpur Kheri violence, she tweeted, “The cropping up of the name of the son of the Union Minister in the Lakhimpur violence raises questions on the working style of the BJP government.” The BJP should sack the Minister as only then will there be any hope of justice for the aggrieved farmers, she added.

Ms Mayawati also said terrorists are killing innocent people almost everyday in Jammu and Kashmir, which is very sad and shameful. The BSP demands that the Centre should take some strong steps in this regard, the party chief added.