Why has Boris Johnson taken his cabinet to Stoke-on-Trent for ‘away day’?

Boris Johnson has taken his cabinet on an “away day” trip to Stoke-on-Trent to discuss the cost of living crisis, hoping to inspire a few new ideas among his ministers.

The prime minister and his top team are making a 300-mile round journey to the Staffordshire town on Thursday as they come under increasing pressure to help hard-pressure families.

But there will be no fact-finding missions to food banks or team-bonding exercises in the Potteries. Ministers are simply staging one of the regular cabinet meetings usually held in Downing Street.

So why Stoke? According to No 10, Mr Johnson is hoping the new environs outside the meeting room window will prompt cabinet members to “bring the benefits of the Queen’s Speech to life”.

Downing Street said ministers discussed how the government’s new legislation agenda can boost the economy and help “level up” the country – highlighting recent funding already given to Stoke.

The symbolic gesture – aimed at reminding voters in “red wall” areas in the north and Midlands that the government cares about them – does at least allow Mr Johnson to avoid the glare of Westminster for an afternoon, as yet more fines are handed out over Partygate.

But getting outside of the SW1 bubble doesn’t mean any new financial help is on the way for those struggling with soaring bills, in Stoke or anywhere else.

The PM had previously asked called on cabinet colleagues to find cost-free ways to ease pressures on household finances – whether through the promotion of benefits not widely taken up, or easing MOT tests.

Ministers will discuss these cheap alternatives to fiscal firepower, as chancellor Rishi Sunak keeps his cards close to his chest about any big plans he has ahead of the Autumn Budget.

In his opening remarks during Thursday’s meeting, the PM urged ministers to “make sure we use all our ingenuity” and “all our compassion” to help people struggling with living costs – saying he was keen on “cutting the cost of energy”.

There are signs No 10 and the Treasury are changing their tune on a windfall tax on oil and gas company profits, with the idea reportedly “back on the table”.

Prior to the big trip to Stoke, Mr Sunak told the BBC on Thursday was “pragmatic” about the idea as a possible way to raise money despite being “not naturally attracted” to the concept.

And Mr Johnson refused to rule out a levy on the profits of fossil fuel companies. It follows an admission by BP chief executive Bernard Looney, who said his firm’s investment plans would not be affected by a windfall tax.

The prime minister suggested during an LBC interview that while he still does not “like” such taxes because of the impact on investment, it is something that will have to be considered.

Pressed on Mr Looney’s comments by host Nick Ferrari, Mr Johnson said: “Well, you know, then we’ll have to look it.”

Mr Johnson also suggested on Thursday that the government will be coming forward with more assistance for hard-pressed families in July. “There is more coming down the track. July and so on,” he said.

Extra financial help on the way, or only the cost-free initiatives from various departments?

The prime minister did not say – though he urged people to checks which benefits they might be eligible for. “What people don’t realise is that actually there is some help that is not being taken up.”

Right on cue for the trip to Stoke-on-Trent, new analysis by Bloomberg finds that the levelling up push has largely failed to reduce regional inequality gap since 2019.

The salary gap between the south-east, London and the rest is widening in most places, while public spending per head has fallen behind London in every region of England.

Stoke is not the only place ministers are going today. Separate from the cabinet meeting in Stoke, ministers are set to visit communities and businesses across the west of England, Midlands and Wales.

The prime minister is heading off to visit a sports facility in Birmingham being readied for the Commonwealth Games. 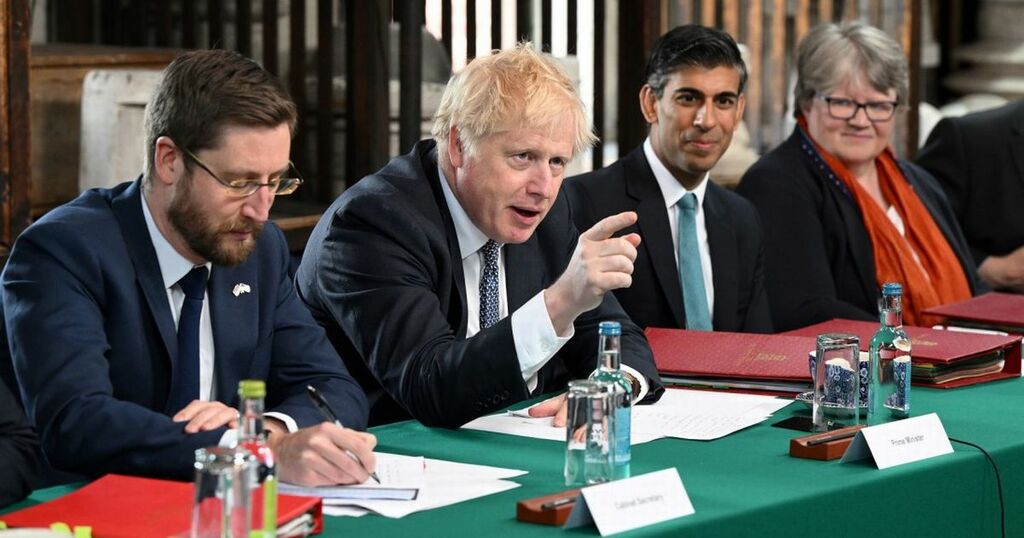