Why Germany Will Be at the Center of the Next Pandemic 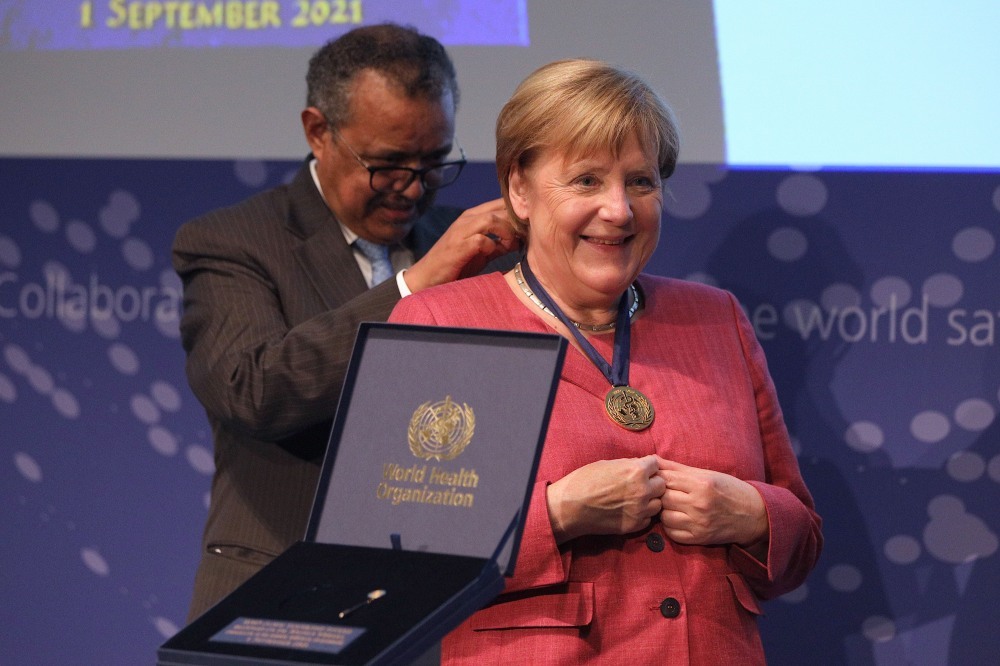 In the early days of the COVID-19 pandemic, the World Health Organization (WHO) became a battlefield of global geopolitical infighting, especially between the United States and China. At the United Nations’ headquarters in Geneva, the Trump administration withdrew its funding to the WHO, accusing it of being too “China-centric” and, by doing so, undermining the organization’s legitimacy. Meanwhile, Beijing used the WHO to gain influence globally by, among other things, promoting its “Health Silk Road.”

The WHO’s new permanent pandemic preparedness hub, located less than a two-hour flight away in Berlin, may not seem like it would provide much relief from the organization’s contentious politics. But the hub’s director, Chikwe Ihekweazu—former head of Nigeria’s Centre for Disease Control and an assistant director-general at the WHO—believes it is the perfect location for the WHO to start a new chapter in its history. “I think Berlin is an interesting place for it because it provides the proximity to Geneva, which we need, but still a bit of distance,” he told Foreign Policy. The new hub, set up in one of Europe’s top tech cities, aims at using cutting-edge technology and a multidisciplinary approach to gather analyze data that will help detect and prevent the next pandemic.

Germany was an obvious choice for the WHO, for political and technocratic reasons. But it remains to be seen whether Berlin’s clout is going to be enough to overcome the organization’s biggest shortcomings: global rivalries spurred by China’s rise and nationalistic policies that prevent access to reliable information .

Germany’s growing public leadership in the WHO is commensurate with its outsized role behind the scenes. When then-U.S. President Donald Trump announced in May 2020 that he would halt U.S. funding of the WHO, Germany quickly filled the void and became the organization’s largest funder that year. “It was a big discussion about funding of the WHO, especially when President Trump announced that he quit his membership in WHO,” said Ulrich Lechte, chair of the Bundestag’s United Nations subcommittee and a member of the Free Democratic Party. “It was when Germany stepped in with a bunch of millions of dollars to give part of the money that was missing by the U.S. to the WHO. … We had discussions in Germany, especially about the funding. We also saw that the WHO is not just there for the pandemic situation but also on the vaccination situation.”

During the pandemic’s initial months, the German government under then-Chancellor Angela Merkel was squarely focused on science rather than geopolitics, said Rafael Loss, a researcher at the European Council on Foreign Relations. “We had a cautious approach from Merkel, going easy on China regarding, for instance, the origins of the coronavirus,” he said. “That was something that she, as a scientist, took a very rational approach, trusting the science, trusting the scientists. I believe that might have diffused some tensions that otherwise would have been detrimental to German-Chinese relations and the context of the COVID crisis.” The fact that Germany managed to stay on good terms with both the United States and China made it a logical choice for a new WHO outpost.

But the most obvious reason for choosing Berlin was strictly financial. The country wrote a $100 million check as an initial investment to fund it. There was undoubtedly a pay-to-play dynamic involved, said Maike Voss, managing director of the German Alliance for Climate Change and Health. In February 2020, France also wrote a $100 million check and got a new WHO Academy campus in Lyon, France. “I find very interesting that Germany criticized France for bypassing the WHO decision-making bodies, but now it’s doing it as well,” Voss said.

According to people close to the process, the deal was decided at the highest political levels in both Geneva and Germany. “[WHO chief Tedros Adhanom Ghebreyesus] knows Angela Merkel very well,” said Detlev Ganten, a world-renown expert on molecular medicine and the retired founder of the World Health Summit. “They like each other; they talk to each other. So, it was a mixture, as always, of good contacts, good infrastructure, and of course, there’s the money.”

Financial considerations aside, some believe the WHO will benefit from Berlin’s unique history as a divided city. This could help bridge the growing geopolitical divide between the East and the West, Ganten believes: “I think this is a bit in the DNA of German history and politics. We understand the people who lived in the eastern part of Germany or Europe, who have known the socialist bloc and communism. This generation is still alive, and they have sometimes a different attitude towards society and politics. That’s an advantage for the understanding of people who live in different regions and political systems around the world.”

It doesn’t hurt, of course, that Germany has a high concentration of internationally recognized public health experts and Berlin is widely known as a hot spot for tech start-ups. Both will be important for the new venture’s success. “Germany is a country of science and academia. Doctors and professors as a profession, in general, have a high reputation,” Ganten said.

But even as Germany has the resources to run the hub and the political will, some people question why the WHO did not choose to place its new pandemic preparedness office in a country in the global south. With limited access to vaccines, the global south is more likely to suffer worse effects from COVID-19 in the years to come. It also has a record of success compared to other advanced economies, including Germany. “It is quite shocking how countries with the highest mortality per capita ratios are the ones with the best technological capacity and financial resources, while low-income countries—such as Cambodia, Senegal, Bhutan—kept the contagion down, particularly in the first 12 months,” said Sakiko Fukuda-Parr, a professor of international affairs at the New School in New York City. She believes integrating “low-tech” solutions are key to dealing with future pandemics, and experts from these countries can provide such perspectives. Ihekweazu, who is originally from Nigeria, agrees.

Johanna Hanefeld, head of the International Health Protection Centre at the Robert Koch Institute, Germany’s disease control prevention agency, emphasized that the hub’s location is irrelevant since its mission is global. “I think it’s important that the hub would network with everyone regardless of where it’s based,” she explained. “It’s not a hub for Germany. It’s just based in Germany.” Yet the hub is already close-knit with two of Germany’s biggest health players: Charité and the Robert Koch Institute.

As director of the new pandemic hub, Ihekweazu said one of his points of emphasis will be encouraging data-sharing across national boundaries. He has plenty of first-hand experience on the consequences of failing to do so. Ihekweazu was part of the first WHO-China Joint Mission to understand COVID-19’s origins. The WHO’s team had very limited access to information about the pandemic’s early stages. “At that time, to be honest, no one really could have guessed how big a pandemic we had ahead of us,” Ihekweazu said. “No one could have anticipated how bad it would get. I can’t go into the details of any country’s openness or lack thereof, but I think the biggest lesson for me is not to be driven not for work, not to be shaped by the circumstances of one country or the other.”

Partners of the new Berlin hub believe China is not the only guilty party when it comes to accessing data on the pandemic’s early stages: “That’s not only true for China,” said Axel Pries, dean of the Charité hospital’s board. “We would love to have more information about the initial state of the pandemic, but you also saw it in Europe, when the first reflex to the pandemic was to, for instance, safeguard parts of the vaccine production to their own country, despite the fact that international production of vaccines is a very, very international thing.” Germany itself still refuses to waive patents on COVID-19 vaccines.

As such, the key to preventing the next pandemic is not solely in China’s hands. “It is hard to control whether health data are correctly collected and whether these are not biased,” Ganten said. “We don’t know what comes from Johns Hopkins, for example, or from other places—how they gather the data. And you always have to be skeptical about the quality of your own and data from other sources.”

For the hub’s director, one of the biggest challenges will be to show the benefits of sharing data. “Big countries dominate a lot of the narratives, but the world is made up of close to 200 nations, and we’re going to start from a country we think has that openness and willingness to share, and then we can demonstrate value in this principle,” Ihekweazu said.

But, of course, there is plenty of evidence to the contrary—namely, that sharing data can have negative consequences in the short term, at least economically and politically. Ihekweazu talked to Foreign Policy on Nov. 27, 2021, a few days after South Africa announced the discovery of the omicron variant. Many countries had already canceled flights and added restrictive measures targeting South Africa. The case exemplified why countries are reluctant to share data. The country at the origin of a pandemic or new variant will always face detrimental economic consequences. “We’ve seen countries take unilateral action against others in terms of travel to that specific country without really considering the global implications,” Ihekweazu said. “Because then, that country could decide … next time to not share my genomic sequencing data as openly as it has. Then, what are the consequences?”

Even as the new pandemic office has to emphasize the value of cooperation, it also has to confront countries that are reluctant to share data. Here, Berlin’s strategic location may prove to have its own limitations. Even though Germany managed to keep a somewhat friendly and pragmatic relationship with China during the pandemic, Germany’s approach toward China could change under its new government, which took office in December 2021. The country’s new foreign minister, Annalena Baerbock, who is also the co-leader of the Greens party, has vowed to take a harder line on China. German Chancellor Olaf Scholz, however, conspicuously ran a campaign based on continuity with Merkel’s policies, not radical change.