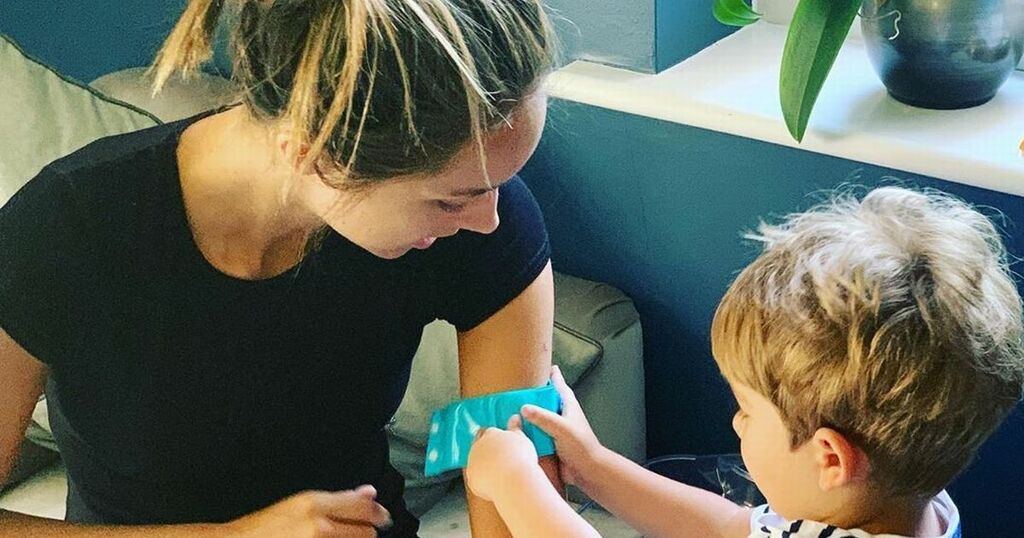 Peter and Emily Andre never show their kids' faces - and they have a very understandable reason for doing so.

The couple, who are parents to eight-year-old Amelia and five-year-old Theo, have always kept their children out of the limelight.

It's a very different story for Peter's older kids, Junior, 16, and Princess, 14, who have been all over magazines, reality TV shows and social media since they were born.

This was addressed in their mum Katie Price's scathing rant on her Instagram Story this weekend, where she branded Emily a "disgusting person" and claimed the NHS doctor prevented Princess from visiting her in rehab last year.

In the now-deleted post, Katie claimed Emily was "jealous" over her relationship with eldest daughter Princess as she lashed out at her ex-husband's wife.

Katie ranted: "So cringe she has used my children to make money in photo shoots yet covers her own children's faces up!"

Emily, who has not responded to Katie's scathing Instagram attack, has previously explained why she has banned her kids' faces from being on social media.

The mum-of-two has vowed to protect Amelia and Theo from vile trolls because other celebrity parents have seen their kids targeted by vile trolls.

The NHS doctor said she made the decision because she doesn't want to see cruel comments about her children's appearance.

"This is exactly why I have been cautious about sharing my children's faces online," Emily explained. "I feel like people are really cruel.

"To make comments about a child's appearance is unnecessary and wrong. Making comments in general about people's appearances generally is uncalled for.

"It's no wonder we're seeing a rise in people with body insecurities and people making enhancements to their bodies."

Peter has admitted he respects Emily's decision - and they have also decided a black-out is best all round due to bitter experiences he had with Junior and Princess when they were younger.

Speaking in a video on their YouTube channel last year, Peter said: "So Emily's point is that they weren't born into the media - no one has ever seen their faces so she doesn't really want anyone to see their faces.

"So when they go to school no one can really recognise them at that.

"Obviously from J and P from day one, we were documenting our lives and they were part of that so I think they have always been in the media.

"And that's the reasoning for it. So I have to respect Emily for that. She hasn't done it. She says once you do cross that, there's no going back so I'm like, 'OK, no problem'."

The couple do put sweet videos of Amelia and Theo online, such as them playing in the snow, but make sure their faces are never in the shot or covered up.

In 2020, Emily stated that they now have the benefit of hindsight after seeing how being in the limelight had impacted Junior and Princess.

Speaking The Sun, she said: "I’ve seen comments where ­people are horrible about a baby’s looks and celebrity kids.

"'She’s unlucky she looks like her dad' and so on. It’s absolutely disgusting.

"Millie [Amelia] has already asked me why her face can’t be shown on TV but I 100 per cent don’t think it’s the right thing to do. I'm sticking to that."

However, Peter has found out that's it's a tougher job than it may seem.

During an appearance on Loose Women in May 2020, Peter had a lapse in concentration when his son ran into the room and started hugging him during a live interview from home.

The singer later confessed he was in the "dog house" after he broke his agreement not to show son Theo's face on TV.

But he did state it was a "pure accident" and he found Theo's intrusion "very funny".

"I’m sooo in the dog house.. Hey accidents happen we are in lockdown.... @loosewomen @ itv," he explained after the error.

At the end of last year, Emily said she was proud of the way the kids had dealt with the last 12 months.

Their lives were disrupted by Covid restrictions, while Junior and Princess have endured the extra stress of seeing their mother narrowly avoiding jail for drink-driving while banned and without insurance.

Taking to her column in OK! magazine in December, proud mum Emily happily discussed the achievements of the four children.

"Theo starting school was another big thing for me," she wrote.

"All the kids went through some form of transition in September, so there was a lot of change to deal with.

"Junior started college, while Millie moved up to juniors and Princess started her GCSEs."

Admitting that it had been another 'weird' year due to the ongoing pandemic, Emily said she was especially proud of the children for coping so well.

She gushed: "It’s been really nice seeing the kids flourishing and growing up, and I’m really proud of them all for how they’ve dealt with everything."

Now the Andres are at the centre of a storm after Katie Price's scathing rant towards Emily, which has since been deleted from her Instagram Story.

"So cringe she has used my children to make money in photo shoots yet covers her own children's faces up!

"She claims to be a doctor who clearly doesn't have a clue about mental health.

"Emily you are not and never will be my kids' parent so mind your own business, your [sic] so two faced and definitely not the person you portray to the public.

The Mirror has reached out to representative for Emily Andre for comment.

Do you have a story to share? Email web features@trinitymirror.com