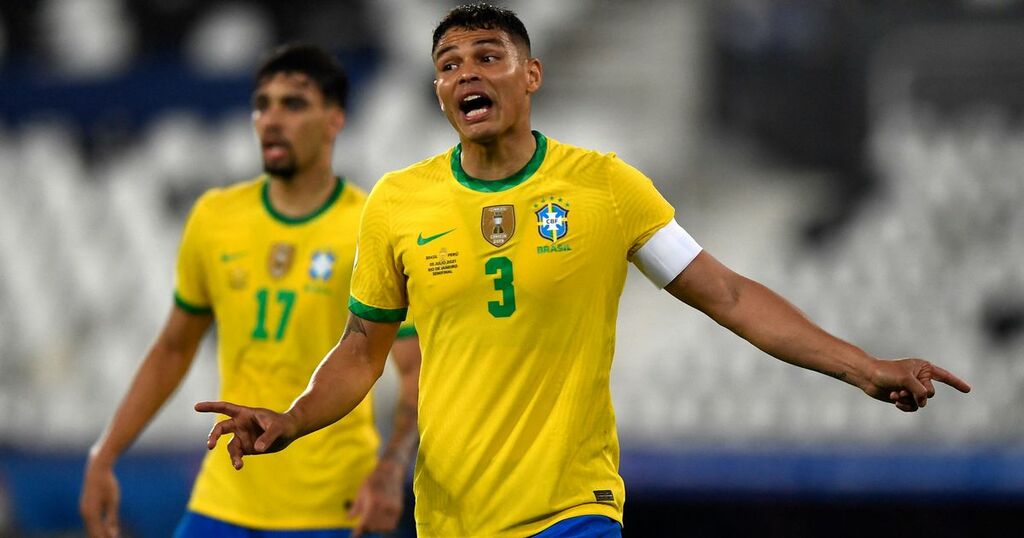 Chelsea's Thiago Silva is set to be unavailable to feature in the Blues' next two fixtures, the Premier League clash with Aston Villa and Champions League opener versus Zenit Saint Petersburg.

Not due to his own ill-discipline, or an injury but due to a club versus country row that may only just be igniting.

Premier League clubs, including the Blues, unanimously decided to not allowed their players to travel to red-list countries, due to the quarantine rules in place from the United Kingdom government. Brazil is a country on this list. As such no Brazilian players from the Premier League travelled for this round up of international fixtures.

However, those players not reporting for duty with the Brazilian national team now face repercussions after Brazilian football authorities triggered a FIFA ruling to prevent them appearing for their club sides this weekend.

All 211 of FIFA's member nations have agreed to regulation that invokes a five-day playing restriction that can be applied if a national association requests it when a club refuses to release a player for international duty. This is designed to prevent tactical withdrawals.

The restriction begins following the final match of the international break, so in this instance from September 10th-14th, which encompasses the Blues' matches with Villa and Zenit.

Mexico, Chile and Paraguay have also requested the rule be enacted by FIFA, leaving Wolves' Raul Jimenez and Newcastle's Miguel Almiron ineligible this weekend, in addition to Fabinho, Firmino, Alisson Becker of Liverpool, Ederson and Gabriel Jesus of Manchester City, Manchester United's Fred and Raphinha of Leeds, as well as Silva.

Why did some players still go on international duty to red list countries?

Aston Villa's Emi Buendia and Emi Martinez travelled for Argentina's qualifiers, while Cristian Romero, Giovani Lo Celso and Davinson Sanchez all appear to have gone against Spurs' wishes by linking up with Argentina and Colombia (Sanchez) respectively.

The Tottenham trio are set to face fines from their club, while all five players have headed to Croatia for their quarantine period ahead of returning to the United Kingdom.

Martinez spoke out about the situation and said that he felt the Argentinean internationals cared too much to turn down the call.

The Villa stopper said: “The four of us decided to come for the love for the shirt, even though all the Premier [League] did not want to come, we decided to come anyway. After winning the Copa América, the whole team wants to be with the group, not just give the national team a victory. It’s something beautiful that we have and we assume the consequences.”

Why has Richarlison not been punished?

The Everton star did not join up with the Brazil squad for their World Cup qualifiers but was given leniency by the Brazilian authorities having previously participated in the Olympics.

Regulations did not force the Toffees to allow their star to travel to Japan, and that appears to have built up the good will for authorities to allow the 24-year-old to feature against Burnley.

Meanwhile, Arsenal's Brazilian stars Gabriel Magalhaes and Gabriel Martinelli are unaffected having not been selected for this Brazil squad.

Clubs are considering their situation having been notified by FIFA but, as things stand, anyone going against the ruling would be at risk of further sanction.

FIFA president Gianni Infantino has been a proponent of the UK government providing exemptions to allow players to honour their international commitments, but nothing has been forthcoming yet.

Brazil are set to announce their squad for October qualifiers in nine days' time, and we could see the conflict play out again with international fixtures in October and November.

More international federations could ask FIFA to impose restrictions, as it is down to an individual member to make the decision to invoke the punishment.