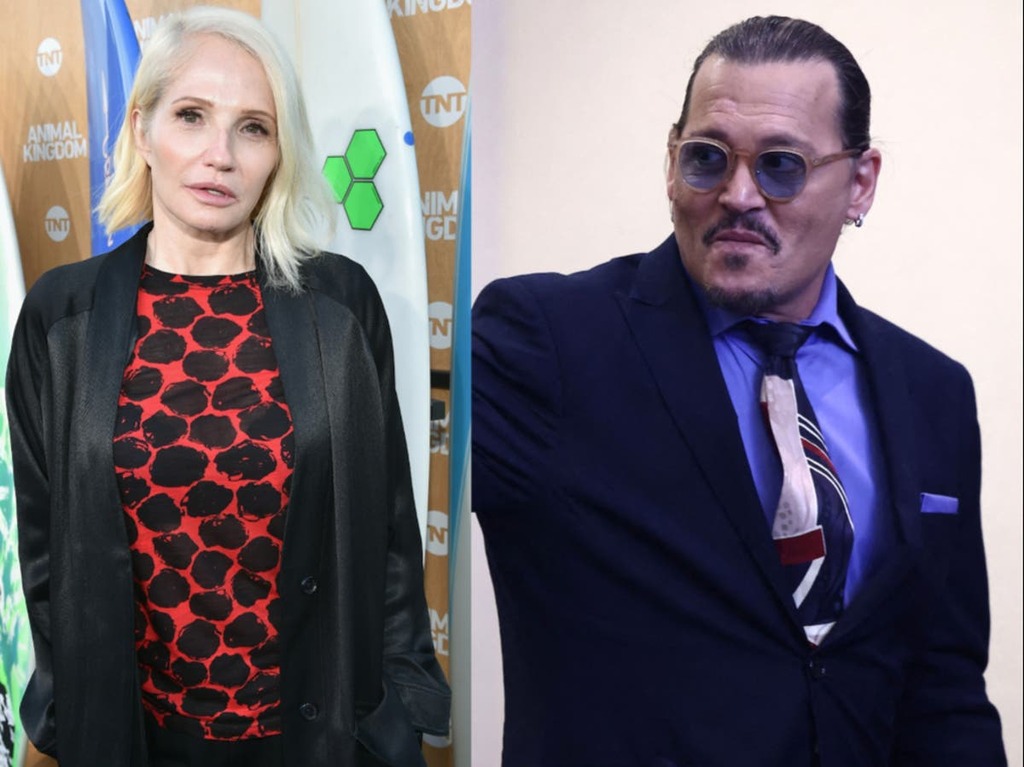 Who will testify when Johnny Depp v Amber Heard trial resumes?
Trial will resume on 16 May after one-week hiatus

The Independent UK
Who will testify when Depp v Heard trial resumes?

The Independent UK
From Elon Musk to James Franco, who were potential witnesses at Johnny Depp vs Amber Heard defamation trial?

Trial began with jury selection on 11 April in Virginia

The Independent UK
One subscription that gives you access to news from hundreds of sites
Depp vs Heard trial: Johnny Depp to return to the stands for questioning; ex-girlfriend Ellen Barkin to testify on behalf of Amber Heard

The Johnny Depp and Amber Heard case will resume on Monday, May 16 after a week-long recess. The latest reports…

The trial, which began on 11 April, stems from a complaint filed in 2019 by Depp, who alleges Heard, his ex-wife, defamed him in an op-ed she wrote for The Washington Post in 2018, in which she described herself as “a public figure representing domestic abuse”. He has asked for $50m in damages.

Heard, in turn, has filed a counterclaim, accusing him of allegedly orchestrating a “smear campaign” against her and describing his own lawsuit as a continuation of “abuse and harassment.” She has asked for $100m in damages, and for immunity from Depp’s claims.

Ahead of the trial, Depp and Heard each published a list of witnesses their teams may wish to call upon.

They each filed lists of objections to some of the other side’s witnesses, so the final pool of witnesses will continue to evolve as the proceedings go on.

The trial is currently on a weeklong hiatus because the judge presiding over the case had to attend an urelated conference. Proceedings will resume on 16 May, with closing arguments scheduled on 27 May.

Here are some of the people named as potential witnesses:

The actor is listed as a potential witness on Heard’s list. She has starred in films such as Diner, Fear and Loathing in Las Vegas, and Drop Dead Gorgeous.

Barkin and Depp, who were co-stars in Fear and Loathing in Las Vegas, are believed to have dated in the 1990s. During the UK trial stemming from a lawsuit filed by Johnny Depp against The Sun, lawyer Sasha Wass brought up a statement by Barkin in which she alleged Depp had once thrown a bottle of wine across a hotel room, Reuters reported at the time. The statement also alleged that Depp had become “jealous and angry”, per the news agency.

Depp called the claims “untrue”, according to Reuters, and added: “I do not have an anger management problem.” He contended that Barkin held a grudge against him.

Henriquez, Amber Heard’s sister, is listed as a potential witness on Heard’s side.

Henriquez submitted written testimony in the 2020 case between Depp and The Sun, PA reported at the time, writing that Henriquez told the court she “felt sick” when she learned of Depp and Heard’s engagement.

In her statement, Henriquez said she had “begged” Heard not to marry Depp, and that “him (Mr Depp) putting a ring on her finger was not going to stop him hitting her”.

Depp has denied the abuse allegations.

One of Depp’s two sisters, Christi Dembrowski, took the stand in April to testify on behalf of her brother.

Debbie Depp, his other sister, has yet to testify but appears on Heard’s list of potential witnesses and could therefore give evidence when the trial resumes.

The Tesla CEO was listed as a potential witness for Heard, appearing via video link. However on 28 April, a source familiar with the situation confirmed to The Independent that he would not in fact be taking the stand.

Lists of potential witnesses do not include substantial reasons for why a party’s legal team wants to call upon a specific person as a witness.

Heard and Musk are believed to have dated on and off between 2016 and 2018. When Johnny Depp sued News Group Newspapers, the company that publishes The Sun, for libel in the UK (over a headline calling him a “wife beater”), Musk came up in the ensuing court case.

Eleanor Laws QC, who represented Depp, read out text messages from May 2016, in which Heard told Musk she was going to obtain a restraining order against her then-husband Depp.

Laws said Musk offered to “arrange 24/7 security” for Heard, and that he added: “The offer would stand, even if you never wanted to see me again... anyway, sorry for being an idiot. The radio silence hurts a lot. It only matters because I really like you.”

Depp’s team subpoenaed some of Musk’s past communications with Heard as part of the Virginia defamation case.

The actor was also listed among Heard’s potential witnesses, expected to appear via video link. But as with Musk, The Independent has since learned that he will not be testifying.

Depp’s side had subpoenaed Franco for some of his past communications and documents reflecting interactions with Heard.

Franco, too, came up during the UK court case opposing Depp and The Sun.

Joshua Drew, a friend of Heard, told the court he had heard Depp had a “particular issue” with Franco, and that mention of his name would “cause fights” between Heard and Depp.

The actor was listed among Depp’s list of potential witnesses, but is no longer expected to testify.

Heard’s team subpoenaed Bettany for some of his past communications with Depp.

Bettany was also mentioned during the previous UK court case.

During a preliminary hearing in February 2020, texts from 2013 were revealed in which Depp allegedly wrote to Bettany: “Let’s burn Amber!!!”

Bettany was said to have replied: “Having thought it through I don’t think we should burn Amber – she’s delightful company and easy on the eye, plus I’m not sure she’s a witch. We could of course try the English course of action in these predicaments – we do a drowning test. Thoughts?”

Depp, in turn, was said to have responded: “Let’s drown her before we burn her!!! I will f*** her burnt corpse afterwards to make sure she’s dead.”

In an interview with The Independent in December 2021, Bettany, asked about the texts, said: “It was very strange. It was a strange moment. What was strange about it was you suddenly have one of the most scabrous newspapers in London and their lawyers pouring through your texts for the last 10 years.

“Can you imagine what it would be like, honestly, to have a bunch of lawyers go through every one of your emails and texts for 10 years? All I can tell you was that it was an unpleasant feeling.”

Heard took the stand on 4 May and returned on 5 May to provide more testimony. She has been questioned by her own legal team so far, and is expected to return as a witness when proceedings resume on Monday (16 May). She will be cross-examined by Depp’s lawyers.

Heard is considered a defendant in Depp’s defamation complaint, and a plaintiff in the counterclaim she filed against him.

For a timeline of Heard and Depp’s relationship and legal battles, click here.

Depp was listed as a witness in his own list, as well as Heard’s, and took the stand on the fifth day of testimony on 19 April.

He called Heard’s claims “heinous,” “disturbing” and “not based in any species of truth” and said of the case: “My goal is the truth.”

Depp said he felt exposed testifying as he has been a private person but added: “I can’t say that I’m embarrassed because I know that I’m doing the right thing.”

Depp spent three and a half days on the stand before concluding his testimony on 25 April. According to Law & Crime’s Angenette Levy, Depp will return to the witness stand too.

The actor is considered both a plaintiff in the original complaint he filed, and a defendant in Heard’s counterclaim.

Who will testify when Johnny Depp v Amber Heard trial resumes?
Trial will resume on 16 May after one-week hiatus

The Independent UK
Who will testify when Depp v Heard trial resumes?

The Independent UK
From Elon Musk to James Franco, who were potential witnesses at Johnny Depp vs Amber Heard defamation trial?

Trial began with jury selection on 11 April in Virginia

The Independent UK
One subscription that gives you access to news from hundreds of sites
Depp vs Heard trial: Johnny Depp to return to the stands for questioning; ex-girlfriend Ellen Barkin to testify on behalf of Amber Heard

The Johnny Depp and Amber Heard case will resume on Monday, May 16 after a week-long recess. The latest reports…