Who is Kate Bishop? Echo, Yelena, and 'Hawkeye’s cast, explained 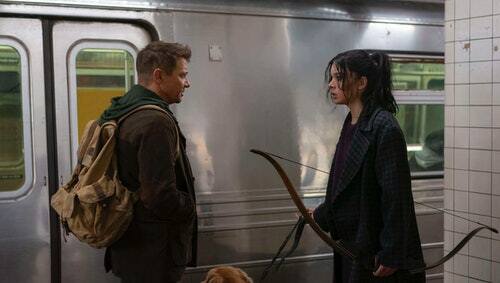 The Hawkguy is back.

After months of leaks and speculation, Clint Barton and Kate Bishop are finally coming to Disney+ in time for the holiday season, and a new trailer for their Marvel series, Hawkeye, has been officially released online.

Amid plenty of exciting moments involving archery and related superhero hijinks, the new trailer gave us a glimpse at the wider cast of Hawkeye.

Who’s who in the series? Here’s everything you need to know about those we see in the trailer and those still lurking in the shadows — from familiar faces to new friends and foes.

Hawkeye! He’s Hawkeye. The hero we’ve known and loved since the first Avengers movie has been around for almost a decade, and yet he is only now getting a story all his own. Jeremy Renner brings the sharpshooter to life one more time — and possibly for the last time, as he trains up Kate Bishop, thought by many to be the next iteration of Hawkeye. Speaking of...

Kate Bishop has long been a fan favorite, thanks to her sardonic and sarcastic characterization in the comics. Academy Award nominee Hailee Steinfeld (True Grit, Apple TV+’s Dickinson) brings Kate to the MCU with her own signature sense of sincerity and quick wit, meaning this is a character/actor match made in heaven.

In this trailer, we see Kate starting her career as a vigilante, skulking around what looks like her school. Considering this is a series set around the holiday season, Kate will have to go on winter break, and that means facing her family. Thankfully, doing so brings us into contact with a familiar face.

Eleanor Bishop, played by Vera Farmiga (The Conjuring, Bates Motel), is Kate’s mother. We only get a brief glimpse of her in the trailer, sipping white wine while sporting a sleek bob, but it seems she’ll retain the character’s comics background, in which she was a notorious socialite.

In the comics, Eleanor Bishop supposedly died, only to re-emerge as a villainous mastermind. Could the MCU’s Eleanor follow a similar path?

Plenty of characters were inevitable additions to Hawkeye, but the addition of Echo came out of left field. Also known as Maya Lopez, Echo is a Deaf Native American superhero, played in the MCU by Deaf Native American actress Alaqua Cox. Echo’s inclusion in Hawkeye is especially interesting, given that Echo doesn’t have as many ties to Hawkeye as she does to other heroes such as Daredevil.

In the comics, Echo was raised by Kingpin after the death of her father. However, Native American actor Zahn McClarnon has been cast as William Lopez, and Maya’s dad in the comics was named Willie. So it’s possible this part of her backstory won’t factor into the MCU. However, with Echo getting a spinoff series of her own in the future, anything is possible.

When the first leaks sprung from production on Hawkeye, Clint and Kate weren’t the most exciting presences on set. That title went to the golden retriever Kate had on a leash, instantly recognizable to any comics fan as Lucky the Pizza Dog, Clint’s pizza-loving pet.

Lucky does get a closeup in the trailer, so it’s clear he’ll be a major player in Hawkeye. However, it’s unclear if he’ll get a story told from his perspective, as was the case in the original comics. Regardless, move over Lokigator and Frog Thor: there’s a new Marvel critter in town.

Those missing in action:

Yelena burst into the MCU during her fellow assassin’s self-titled solo film, Black Widow, but now she’s out for revenge — and Contessa Valentina has pointed her in the direction of Hawkeye. It’s already been announced Yelena will appear in Hawkeye, so the question remains: why didn’t we see her in the trailer?

It’s possible her look will be radically different, mirroring the way Scarlett Johansson’s look for Black Widow varied from film to film, which means her appearance might be saved for a reveal during the series.

Les Miserables actor Fra Fee will play Kazi, which is most likely short for Kazimierz Kazimierczak, the villain otherwise known as The Clown.

He’s a mercenary hired by the Tracksuit Mafia, the Russian “bros” we know will appear in Hawkeye thanks to the “Trust a Bro” moving company van Kate blows up in the trailer.