Who are the independents likely headed to parliament after election night's 'teal bath'?

Election night is shaping as a resounding victory for a group of independents who have challenged both parties to do more on climate change and accountability.

The so-called "teal independents", named after the colours of their campaign materials, are candidates contesting in typically safe Liberal seats on a platform of greater climate action and implementing a federal integrity commission.

These candidates were backed by a well-funded campaigning machine called Climate 200, which raised about $12 million from more than 11,000 donors.

And while most of these independents are challenging established Liberal politicians, Labor is also taking note of the rise of so many independents.

Liberal MPs Tim Wilson, Trent Zimmerman, Jason Falinski and Dave Sharma are projected to lose their seats to teal challengers, with another Liberal likely to fall in WA.

The biggest scalp of the night looks to be Josh Frydenberg, who concedes he may have given his last speech as Treasurer.

Former Liberal Party apparatchik Tony Barry is calling the night not a bloodbath but a "teal bath".

With the close of vote counting at midnight on the east coast, here are the results so far for some of the most closely-watched independent candidates contesting in Liberal heartland.

Sydney doctor Sophie Scamps was the first win among the teal independents tonight.

With 70 per cent of the vote counted at midnight, Dr Scamps is projected to win.

Dr Scamps was previously practising as a GP in the seat before announcing her candidacy.

The ABC has projected Dr Scamps will win the seat from the Liberals, and speaking to Channel Nine the candidate claimed victory.

"This is about genuinely trying to represent our community and take our voice and values to Canberra. We're super excited. This is a win for democracy," Dr Scamps said.

Sitting Liberal MP Trent Zimmerman has conceded his loss to independent candidate Kylea Tink in the seat of North Sydney.

The ABC has also projected a win for Ms Tink, who was the chief executive of the McGrath Foundation.

The seat has been held by the Liberal Party since 1996, after it was briefly held by an independent.

Finance Minister Simon Birmingham said the loss was a "devastating blow" for the Coalition.

Allegra Spender looks likely to claim the NSW seat of Wentworth from Liberal MP Dave Sharma, who has previously faced tough contests against independents for the seat.

Ms Spender is a businesswoman who was the managing director for fashion labels Carla Zampatti and Bianca Spender.

She leads with half the vote counted at midnight, and the ABC projects she will succeed against Mr Sharma.

The seat of Wentworth was once represented by former prime minister Malcolm Turnbull, and fell to an independent when he quit parliament.

It was won back by Liberal MP Dave Sharma at the last election.

If Monique Ryan wins in her seat of Kooyong, it will be one of the biggest stories of the night.

Dr Ryan is facing off against Treasurer Josh Frydenberg, not only one of the most senior members of the government, but also tipped as a future leader of the Liberal Party.

Dr Ryan has spent her career in medicine and public health, and says she's "definitely not a politician", but was driven to run over frustration at government inaction on climate change.

With half the vote counted at midnight, Dr Ryan was leading in the two party-preferred race.

ABC election analyst Antony Green held off making a call on the hotly contested seat, but shortly after midnight gave the win to Dr Ryan.

Mr Frydenberg spoke to party faithful to reassure them the fight was not over.

"There's still thousands of postal votes to count," he said.

"While it's mathematically possible that we win in Kooyong, it's definitely difficult."

Mr Frydenberg conceded it could be his "last press conference as Treasurer".

Dr Ryan said she had not prepared a victory speech but appeared triumphant as she spoke to supporters.

"Our government was not listening to us, so, we have changed the government... and that is the power of the people," she said.

The head of Climate 200, Simon Holmes à Court, who himself has been campaigning heavily in Kooyong, said the teal movement had seen massive success.

"[Volunteers] have knocked on every knock-able door in the electorate," Mr Holmes a Court said.

Kooyong has been held by the Liberal Party and its conservative predecessors for its entire existence, most famously being the seat of party founder Robert Menzies.

Zali Steggall has kept her seat of Warringah and appears to have increased her lead.

Her 2019 victory, partly funded by the then-nascent Climate 200 group, has been an inspiration for the group to drive a larger campaign this election.

Ms Steggall was widely predicted to win against Liberal contender Katherine Deves, who brought significant attention to the contest over her controversial views on transgender people.

Finance Minister Simon Birmingham said the Liberal Party made a mistake running Ms Deves as their candidate, telling the ABC "we've paid a price in Warringah".

Zoe Daniel was a foreign correspondent for the ABC who has made implementing a national integrity commission one of her highest priorities.

The ABC has projected Ms Daniel will win Goldstein.

The bayside seat of Goldstein in Melbourne has been held by the Liberal party since it was established in 1984, and by Mr Wilson since 2016.

"What we have achieved here is extraordinary," Ms Daniel.

"This moment is a testament to the strength of our democracy. Community can make a difference."

Voting closed two hours later in Western Australia than in the east coast states but independent candidate Kate Chaney is in the lead in Curtin with more than 60 per cent of the vote counted at midnight.

Ms Chaney was most recently an executive for Anglicare in Western Australia and is the niece of form WA senator Fred Chaney.

Curtin has been a Liberal-held seat since its inception, and was previously represented by former foreign minister Julie Bishop, and most recently by Celia Hammond. 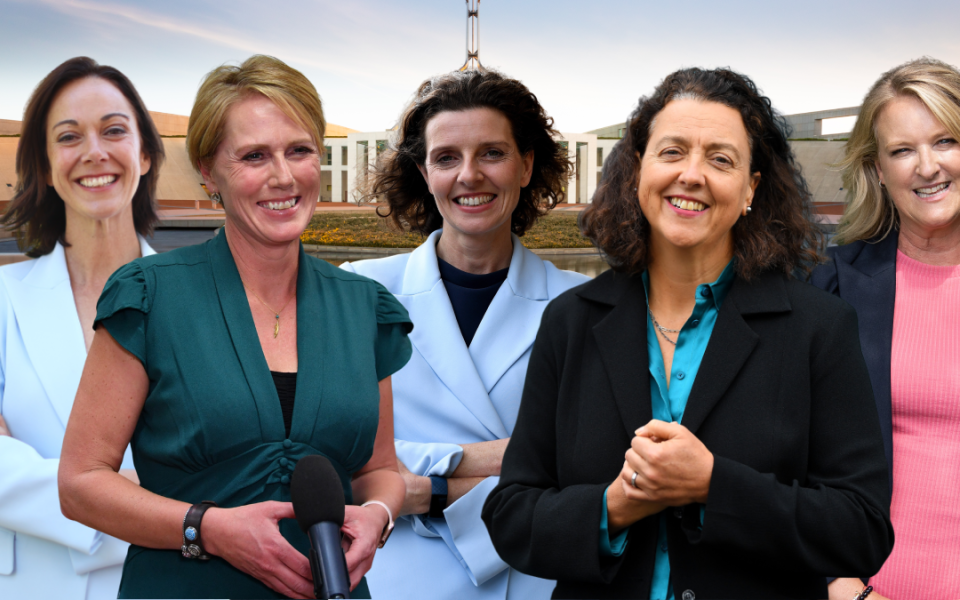 The teal wave: Meet the pro-climate women who took on the Liberal Party and won
A wave of independent, teal candidates running on climate action and transparency rocked the election – causing major upsets for…