But the White Sox later encountered other issues that they resolved in a dramatic manner to seize a 3-2 victory that snapped the Yankees’ five-game winning streak.

Tim Anderson and Luis Robert, with several assists from Yoan Moncada, prevented the Sox from suffering a loss nearly as frustrating as blowing a six-run lead in the ninth inning of a 12-9 defeat Monday against the Guardians.

Anderson celebrated his bobblehead promotion with a 3-for-5 performance, and Robert hit a single against Aroldis Chapman that scooted past diving first baseman Anthony Rizzo to score Anderson with the winning run with one out in the ninth.

‘‘After two losses, this one was very good,’’ said Robert, who also singled in the first to score Anderson to complete a 10-pitch at-bat against Jordan Montgomery and extend his hitting streak to 12 games. ‘‘It felt way better.’’

Robert hit a walk-off three-run home run against the Yankees in 2020, but this hit might have been more satisfying because the Sox lost a 2-0 lead in the final two innings and had been 1-for-8 with runners in scoring position before his game-winning hit.

In unsuccessfully trying to hold a late-inning lead, the Sox likely will be without the services of setup man Kendall Graveman and closer Liam Hendriks until they open a five-game series Monday against Royals in Kansas City.

Graveman pitched two scoreless innings, although he needed only 18 pitches. Hendriks, who was summoned with one out in the eighth after the Yankees had scored a run on three consecutive well-placed hits against Joe Kelly, threw 26 pitches but was charged with a blown save when Kyle Higashioka hit a sacrifice fly in the ninth.

Keuchel induced Rizzo to ground to second with the bases loaded to end the fifth at 86 pitches, then was disappointed he wasn’t allowed to pitch deeper.

‘‘I thought at 86 pitches I had enough to at least go six,’’ said Keuchel, who has allowed two runs in his last 11 innings. ‘‘With how many games we’re playing [six in the next five days], I thought I had at least 100 pitches.

‘‘That didn’t happen. I’m not very happy with that, but that’s the competitor in me, and we’re going to have to figure out something because we have a lot more guys down now, too.’’

The bullpen might be taxed, but Moncada is looking refreshed after missing the first five weeks because of a strain oblique muscle. He hit his second home run in the last three games, a 424-shot to center in the third, to give the Sox a 2-0 lead.

In the ninth, Moncada wisely cut off a strong, accurate throw from left fielder AJ Pollock and threw quickly to Anderson at third to nail Isiah Kiner-Falefa as Joey Gallo scored on Higashioka’s fly.

And Moncada drew a walk to move Anderson into scoring position to set up Robert’s game-winning hit.

Moncada’s emergence is essential while Jose Abreu and Yasmani Grandal try to work out of their funks. Abreu snapped an 0-for-21 slump with a single but stranded a runner at third to end the seventh. Grandal went 0-for-4 and has one hit in his last 15 at-bats.

‘‘It was not a comfortable game because we couldn’t add those extra points and give somebody a chance,’’ La Russa said. ‘‘I will say that before long and for the rest of the season, Joe Kelly will be a fan favorite.’’ 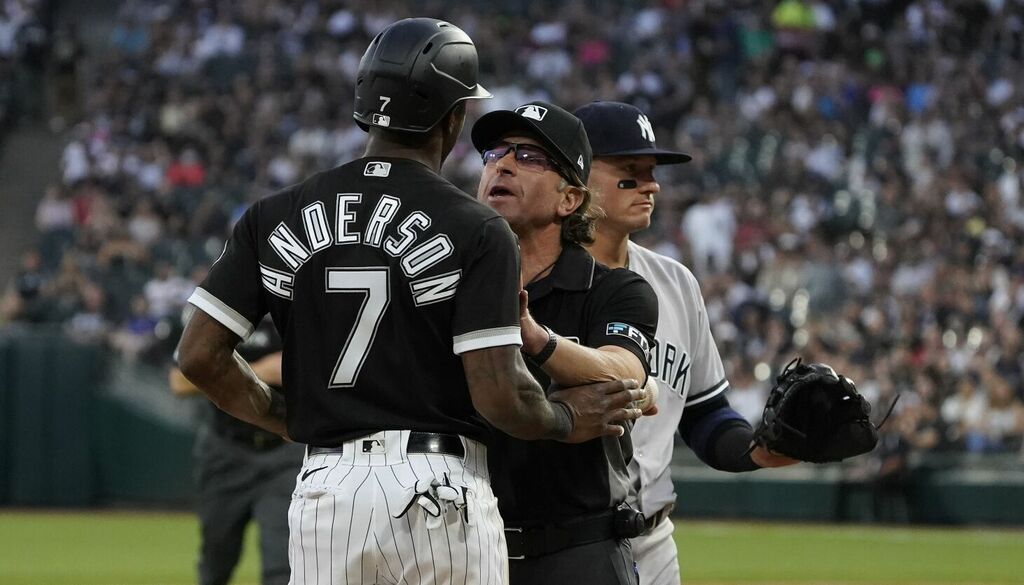 Tony La Russa after White Sox’ loss to Yankees: ‘We got torched’
The Yankees relied on home runs by Giancarlo Stanton, Aaron Judge, Joey Gallo and Josh Donaldson to coast to a…

Chicago Tribune
Nestor Cortes delivers again for Yankees, this time against White Sox
CHICAGO — Nestor Cortes said it has been a little different. On the last road trip, he was hungry and…