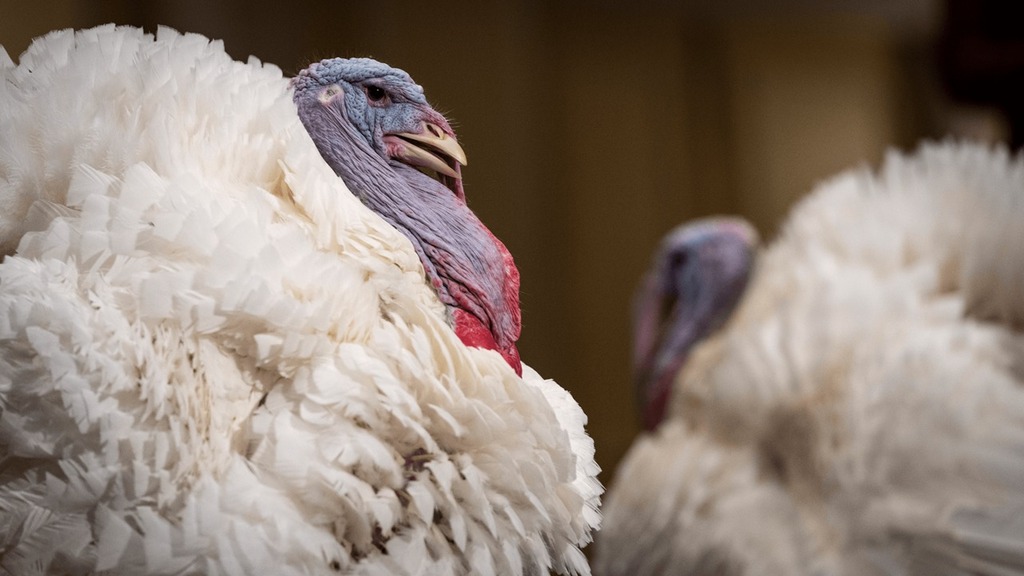 What goes together better than peanut butter and jelly? Peanut butter, jelly and turkey, of course.

At least that's how the White House sees it. The names for the two turkeys who are eligible for the presidential pardon this year are Peanut Butter and Jelly. A video from the White Hous showed the two birds ruffling their feathers in a room at the Willard Hotel, preparing for their close-up. On Friday, President Joe Biden will pardon one of the two and dub the bird the official Thanksgiving turkey — although both birds will be spared from the Thanksgiving table.

The birds were raised in Jasper, Ind., by turkey grower Andrea Welp. Both turkeys are male and weigh about 40 pounds, National Turkey Federation Chair Phil Seger said at a Thursday press conference.

"Raising the presidential turkey flock has really been a lot of fun this year," Welp said. "As we all know with another year of uncertainties with a pandemic, this project has really been something to look forward to and a joy to be able to participate in."

"Some may say that I'm biased, but there's no doubt that Indiana's eighth district has the best turkeys in the country," Bucshon said.

The presidential turkey pardon has a storied history. The first president to be presented with a turkey was Harry Truman in 1947, though the official White House turkey pardoning was started by President George H.W. Bush in 1989. The turkeys are always named in pairs — including 2014's Mac and Cheese, 2016's Tater and Tot and 2017's Drumstick and Wishbone. In 2020, President Donald Trump pardoned turkey Corn over Cob.

Following Friday's ceremony, Peanut Butter and Jelly will return to their home state of Indiana to live out the rest of their days at Purdue University in West Lafayette.