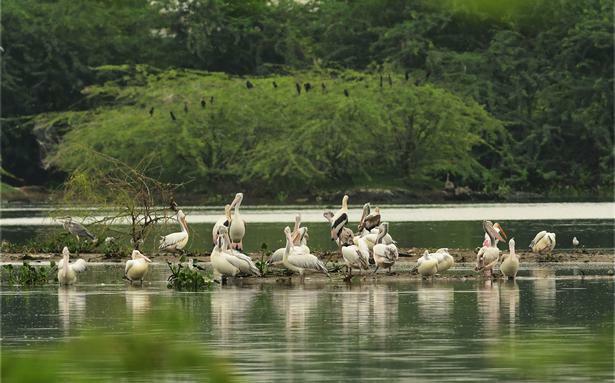 KANCHANABURI: A bull elephant died on Sunday afternoon after it was found suffering from septicemia in a forest in Si…

ABC News
One subscription that gives you access to news from hundreds of sites
Does it matter where Newcastle United finish this season? Have your say on the Magpies' season

Researchers have looked at a range of factors

Where have the blackbucks bolted?

Over the past two years, all roads led to the backwaters of Sriramsagar Project (SRSP) near Nadikuda village of Nandipet mandal in Nizamabad district around this time. But not anymore, or it so seems. For, it was the locale which presented the spectacular sight of thousands of blackbucks strutting about all over the territory, to the delight of the wildlife and nature lovers.

For an unreserved locale which was home only to blackbucks, interestingly, not even a single spotted deer has been sighted in the past three years there. Now, things seemed to have changed dramatically for the worse. On a visit to the spot last Sunday, it was a shocking experience for the handful of nature lovers to spot only about a dozen blackbucks and that too, after a four-hour intense search. This is a far cry from the days when wildlife enthusiasts used to find themselves in a dilemma — which way to head in order to get closer to the blackbucks. Such were the numbers!

So, what exactly went wrong in the past couple of years leading to a dramatic decline in the numbers?

“Essentially, the whole area is unprotected and the blackbucks are easy prey for professional killers. Since the backwaters have become so popular for blackbucks, it has been attracting many people,” says K. Santhosh Kumar, CEO of Navya Bharathi Global School and wildlife photographer, who was the first to showcase to the outside world the presence of these beauties through his pictures which were widely publicised in the media.

Blackbucks are generally sighted between February and July when the backwaters recede after the water from the SRSP is released for agriculture during the summer.

“Well, too much human interference can also be one of the reasons. I was a witness, unfortunately, when some visitors chased the backbucks in jeeps for some sadistic pleasure of seeing them leap and race away to safety,” said Mr. Santhosh.<EP>Now, the usual buzz and excitement around the backwaters this summer is missing for the first time after the habitat of the endangered species was discovered in May 2020.

It is not that top officials of the Forest department were not aware of the threat or the problems on hand with regard to survival of the blackbucks. In August 2020 itself, district forest officials announced that the blackbucks sighted at the backwaters would be protected under an ambitious project. The major plans included setting up a blackbuck sanctuary on the lines of Velvadar in Gujarat besides ensuring complete surveillance by setting up CCTV cameras. In fact, the top brass at the State level involved in the conservation of forests and wildlife were also briefed about the need to protect what was not long ago just the pride of Nizamabad but also of Telangana itself.

The vast, picturesque dried-up bed of the SRSP backwaters presented a breath-taking view for wildlife lovers, courtesy of not just the blackbucks but also other winged visitors like flamingos, raptors, pelicans, Indian courser, oriental pratincole, small pratincole, cormorants, painted storks, open-billed storks, spoonbills and different types of ducks. Not too far away, even leopards were recently spotted besides jackals that regularly surface to attack the blackbucks.

But, the dwindling number of blackbucks is now a matter of serious concern, which begs the question as to whether a huge opportunity of having an exclusive blackbuck sanctuary is lost. “I struggled to spot the blackbucks when I was there last Sunday. It was an unexpected and disappointing scenario for sure. Last summer, around this time, we just didn’t feel like coming back from the place because there were hundreds of blackbucks presenting a beautiful sight,” recalls P. Sathish Rao, a private company employee and wildlife enthusiast, who regularly visits the place.

The drastic change in scenario over the span of just a year is sad, no less, he adds. “Somewhere down the line, we missed a great opportunity to protect the blackbucks for various reasons even though the locale is just 40 km from Nizamabad town,” says Mr Sathish.

Shashidhar, a resident of Nadikude village, is equally baffled by the disappearance of the thousands of blackbucks. “There were days when the farmers used to be annoyed at the kind of havoc these blackbucks were unleashing in their fields. But, they found ways to keep them away, such as putting up loud speakers and playing music which scared them away. But, we never thought their numbers would plummet in just a year,” he explains.

Perhaps, the entire locale being on the periphery of the village, allowing easy accessibility, could well be one of the reasons for the sorry state of affairs, says another villager.

“Before these blackbucks were discovered, we had not seen so many vehicles, especially during weekends, passing through the village. The joy and excitement of visitors to see the blackbucks was palpable, and also gave us a sense of pride,” says Praveen, a registered medical practitioner and a wildlife enthusiast.

Could there be a way of attracting the blackbucks back to the site? Mr Santhosh does not sound too hopeful about it. “I am not sure. Honestly, I seriously doubt whether we can see such huge numbers again. The reasons could be many. It is not easy to recreate the magic that these blackbucks produced by their mere presence,” he signs off.

KANCHANABURI: A bull elephant died on Sunday afternoon after it was found suffering from septicemia in a forest in Si…

ABC News
One subscription that gives you access to news from hundreds of sites
Does it matter where Newcastle United finish this season? Have your say on the Magpies' season

Researchers have looked at a range of factors