Where Do The Boston Celtics Go From Here With Trade Deadline Approaching? 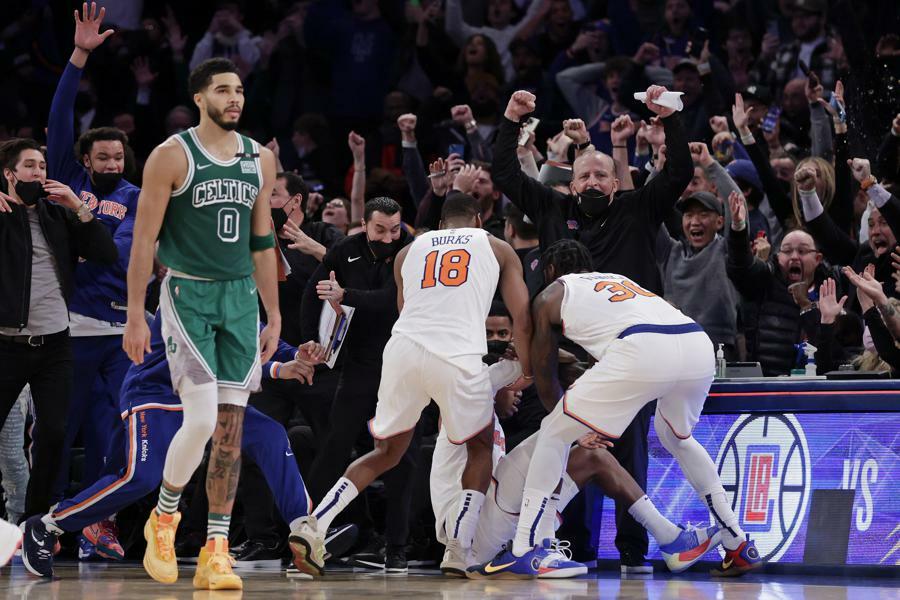 Just when you think it can’t get worse for the Celtics, it does. It’s a pattern that has become all too familiar for Boston and the latest back-to-back was a perfect microcosm of the disappointing 39-game season thus far.

On Thursday, the Celtics blew a 25-point lead to the New York Knicks, losing on an RJ Barrett buzzer-beater to give them their second loss in as many nights. It was another fourth quarter filled with questionable rotations and, arguably the most discouraging trend of them all, horribly stagnant offensive possessions. Jayson Tatum and Jaylen Brown entered Thursday night as two of the NBA’s top-15 scoring leaders, however, Boston has struggled to get both its stars going simultaneously when healthy.

Brown started hot, scoring 12 first-quarter points, but he would score just four points the rest of the way, taking only one shot in the fourth quarter. In the second half, Tatum was 7-for-13 from the floor with 21 points. Very good, right? The rest of his team was, well, not so good. Celtics not named Tatum combined for 21 points on 7-of-21 shooting during the second half. Boston’s leading scorer had no help whatsoever down the stretch.

The Celtics can’t score when it matters. That isn’t some new storyline — it’s an unfortunate trait that this team can’t seem to shake. The solution isn’t an overnight fix, and there is a multitude of issues at hand with just about everyone involved, starting with head coach Ime Udoka.

Take Thursday’s loss as our example. Udoka closed the fourth quarter with Tatum, Brown, Robert Williams, Marcus Smart and Dennis Schroder. Yes, Schroder is probably the team’s third-best scorer, but that doesn’t mean he’s a good match for the closing offense. For one, Schroder is an isolation-style, ball-stopping scorer. Those are two traits that Boston’s core is so desperately trying to move away from, especially in crunch time. The veteran point guard just isn’t one to amplify crisp ball movement. Additionally, when Schroder plays alongside Smart, he turns him into a shooting guard — an ineffective way to utilize the 27-year-old. And on a team so desperate for shooting, why would you elect to close with a guard next to Smart who is shooting 33% from 3? This rant could go all day, but Udoka needs to reevaluate closing games with Schroder.

The issues with Tatum and Brown are concerning as well. Just one night prior to Thursday’s quiet second half, Brown scored 30 points. It looks good on paper, but he posted just two points in the fourth quarter of Wednesday’s loss, while Tatum was scoreless in the final 4:17. Teams will do anything to take the ball away from Tatum and Brown and force others to hit shots in big situations. On Thursday, the Knicks weren’t able to slow down Tatum in the second half, but it didn’t matter because he was all alone. And on nights where opponents do successfully limit both stars, it’s more than likely that Boston’s supporting cast, or lack thereof, will fall flat.

These issues fall both on the players and Udoka. Tatum and Brown need to do a better job of promoting ball movement down the stretch of close games, especially when they’re blitzed by opposing defenses. At the same time, Udoka needs to put them in a better position for success with improved rotations and play-calling. It works both ways, and adjustments aren’t really being made on either side. The response to these perpetual problems has been slow, if not nonexistent. We’re 39 games into the season, yet nothing seems to be changing, but the lack of adjustments on Udoka’s end was incredibly noticeable in New York, as was Brown’s lack of involvement after the first quarter.

So where do the Celtics go from here as the trade deadline approaches? As much as some fans want to see it, an in-season overhaul just isn’t happening. Unless your team has general manager LeBron James at the helm, you very rarely see a series of major moves drastically change a team’s roster in the middle of a season. The Celtics should make their tweaks to improve the personnel around Tatum and Brown while focusing on the offseason for potentially bigger deals. They aren’t in a spot where they need to move either star, but they certainly need to improve the group around them in an effort to maximize their skillsets.

Moving Schroder would be a good start for president of basketball operations Brad Stevens. Get something in return for the veteran point guard before he leaves in free agency for nothing this summer, while also forcing Udoka’s hand with how to use those minutes. If the Celtics aren’t going to make any noise this postseason, (which there is no reason to believe they will as it stands through 39 games) why have Schroder take up a rotation spot only to walk in the offseason? Get assets in return and give those minutes to younger players for development, like Payton Pritchard and Romeo Langford. That feels like a much more effective use of that rotation spot.

The Celtics are not in a good spot, and no one within the organization is content with the team’s current position. That being said, major moves are not on the immediate horizon whether you like it or not. The offseason could surely present greater changes, and rightfully so, but Stevens isn’t going to make a move next month just to make a move. It has to have the team’s long-term interests in mind, and those moves aren’t always available during the season.

Boston’s issues run from top to bottom. Ime Udoka, Jayson Tatum, Jaylen Brown — everyone has to be better within their role than they’ve been to this point. That is obvious and has been said countless times following gut-punching losses, yet the adjustments have not arrived. Time will tell if and when they do.