When it itches, you scratch 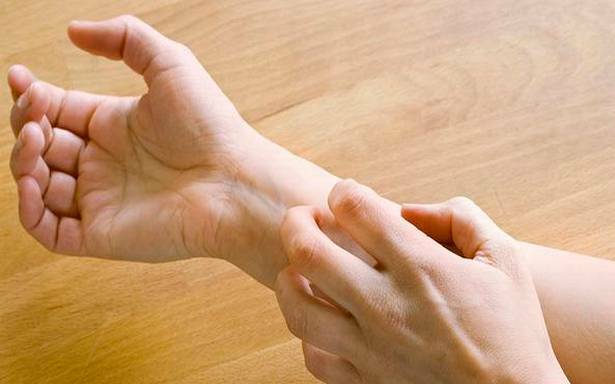 There was a young lady from Natchez

whose clothes were always in patches.

When asked why this was, she replied it’s because

wherever I itches, I scratches.

An unpleasant sensation that elicits the desire or the reflex to scratch is how itch has been classically defined. Scratching does help ward off that insect which is troubling you; but pruritus (as itch is called) that persists for longer than six weeks is a pathological state with profound effects on the health, physical and mental, of one in seven persons. Ongoing research has uncovered a wide range of mechanisms underlying what appears to be a single condition.

Chronic itch can be dermatologic - often triggered by the release of histamine, and treated with antihistamine drugs (e.g., Benadryl), neuropathic (related to the nervous system, as in shingles, nerve compression and cerebral hemorrhage), or systemic (as in renal insufficiency) or psychogenic (as in obsessive-compulsive disorders).

Itch in the elderly

The elderly are particularly prone to chronic conditions that manifest as itches. In a South Indian study, (Manickam and colleagues, Journal of The Indian Academy of Geriatrics, 2018; 14:17-25) eczema was seen in 29% of a study group of subjects in the 60+ age group. Another study at the Base hospital of the Delhi Cantonment on the same age group reported that 56% of their subjects complained of pruritus (Indian Dermatology Online Journal, 10(5), 2019). In an analysis of 100 patients complaining of chronic itch. associated causes could be pinpointed in 62, and included diabetes, hypothyroidism, several cancers and Iron deficiency. (Indian Journal of Clinical and Experimental Dermatology, 5: 130, 2019).

Factors that induce itch are called pruritogens. Tissues that are sensitive to itch include the skin, mucus membranes and the cornea of the eye. Some nerve fibres in these tissues (pruriceptors) are stimulated by pruritogens and the resulting signals are carried, via itch-signaling neurons in the spinal cord, to the brain. There are several different receptors and channels that respond to pruritogens. A great degree of redundancy in their roles ensures that no matter what, the itch sensation gets through to your brain.

A common example of chronic itch is atopic dermatitis, an inflammatory condition showing cracked, itchy skin, which is often caused by allergens. As an example, it may be triggered by the house dust mite, barely a third of a millimeter in size, that feeds on the dead scaly skin that you shed all the time. Its faeces contains a protein which is a potent pruritogen. Upon binding to receptors in the skin, it elucidates allergic reactions such as atopic dermatitis, or asthma. These receptors are therapeutic targets, the aim being to block the itch sensation from being transduced to the brain, without hindering other sensations that protect you from harm.

Not the same as pain

The scratch response is a key difference between itch and pain. Sudden, sharp pain causes you to hurriedly retract and thus escape damage; scratching actually draws attention to the cause of the itch. Scratching evokes an inhibition of itch-signaling neurons in the spinal cord. This reduces the quantum of itch sensations that reach the brain. What a relief! But the respite is only short-lived – by scratching, you are inflicting mild pain, and in your brain, pain can momentarily overshadow the itch sensation. Scratching may even trigger reward systems in the brain, making it a pleasurable feeling. But for patients with chronic itch, scratching can be a bane, causing damage to the skin and aggravating the itch.

People who have lost a hand or leg often find that their ‘phantom limb’ itches profusely. Their brain rewires itself over time and signals from another part of the body now map to the region that earlier received somatosensory inputs from the limb. In a series of deceptively simple experiments, the neuroscientist V.S. Ramachandran of the University of California, San Diego, showed that people who have recently lost a limb in accidents and often complain of their ‘phantom hand itching like crazy’, could obtain relief by scratching various parts of their face – scratch the upper lip, and the absent index finger feels comforted, and so on.

Novel therapeutic methods try to tackle chronic itch at many different points, from the skin to the central nervous system. UVB light is known to attenuate histamine release from immune cells in the skin, so phototherapy has proved useful. Garments of a silk that is coated with antimicrobial compounds are another strategy to soothe itching skin. Long-term itch leads to functional anomalies in the regions of the brain associated with itch, and non-invasive transcranial direct-current simulation has been shown to offer relief.

(The article has been written jointly with Dr. Sushil Chandani, sushilchandani@gmail.com)