What would George Floyd’s life have looked like without the crushing weight of racism?

The murder of George Floyd two years ago prompted a global awakening about the pervasiveness of racism, as millions of people, from Toronto to Tokyo to Tottenham, joined together to take to the streets in the summer of 2020.

After nearly two years of reporting on Floyd’s life and legacy, and writing a book, His Name is George Floyd: One Man’s Life and the Struggle for Racial Justice, we are often asked if anything has actually changed since his murder.

When we posed the question to Reverend Al Sharpton, the US civil rights leader, he described “Newton’s law of civil rights”.

“For every action, there’s going to be a reaction,” said Sharpton, who had advised members of Floyd’s family to prepare for the outcry in their brother’s name to be followed by a pernicious pushback by detractors set on maintaining the social order. “So brace yourself. But keep going.”

In the immediate aftermath of Floyd’s demise, there was palpable hope that the world might defy history’s physics. As the video of his dying cries of “I can’t breathe” circulated around the world – during a deadly pandemic that had highlighted how interconnected our global fates have become – Floyd’s name began to be uttered by presidents, prime ministers and the pope. His face was painted in Syria, Pakistan and the West Bank. In Bristol, crowds toppled the bronze statue of Edward Colston, a trader of enslaved people, and tossed it into the harbour. Colston’s descent, captured live on global news channels, seemed to symbolise a forceful absolution for past sins, a national baptism into a more equitable future.

With Floyd’s experience with police brutality as a catalyst, activists from London to Berlin began to call into question the disproportionate use of stop-and-search measures against Black Europeans.

For a moment at least, it seemed that people of all political stripes were willing to acknowledge the reality that racism continued to play a major role in society and that it remained a force that needed to be proactively eliminated. And despite the resistance that ultimately emerged, there have been some lasting changes from the initial burst of activism sparked by Floyd’s death.

In the US and beyond, several local governments and police departments have banned the use of chokeholds and other aggressive policing tactics. The US’s 50 biggest companies pledged at least $49.5 bn to address racial inequality, according to an analysis by the Washington Post. The US government declared a new federal holiday to commemorate the emancipation of enslaved people, and officials worldwide took symbolic steps to show a renewed commitment to eliminating racism and the vestiges of past wrongs. The European parliament voted to proclaim “Black lives matter”. European leaders formally adopted an “anti-racism action plan”. And after activists across Europe called on their governments to address the legacy of colonialism, Germany agreed to return looted treasures to Nigeria, for example.

But it did not take long for momentum to be lost. While the summer of 2020 showed record high support for the Black Lives Matter movement, as the memory of Floyd’s death faded, so, too, did the willingness to grapple with the injustice that he faced both in life and as he died. By September 2020, a study from the Pew Research Center found that support for the Black Lives Matter movement had decreased from 67% to 55% overall, where it would remain into the following year. The fascination with the phrase appeared to be a ceremonial, summertime fling. The US federal police reform bill that was to bear Floyd’s name fell victim to partisan politics and was never passed.

In 2022, a new counterattack has emerged against diversity or even discussing the concept of systemic racism. Today, rightwing politicians in the US are winning elections by promising to outlaw the teaching of “critical race theory” in schools, and books about racism are being banned in some communities. The moves reflect a reactionary agitation about whether the amplified focus on race has gone too far.

Remembering Floyd’s story hopefully reminds us what can happen to an individual when a society ignores the residue of historically racist policies, while teaching us about having persistence in the face of challenges.

As we researched Floyd’s life, conducting more than 400 interviews to craft a portrait of his unique American experience, it was easy to envision a much different outcome for him, had his journey not so often run headlong into the brutal force of institutional racism.

Instead of being born impoverished, Floyd could have come into the world as a wealthy scion of an industrious great-great-grandfather, if racism had not stripped his hardworking ancestors of their landholdings in North Carolina at the turn of the 20th century. He could have been able to pursue his second-grade dream of ascending to the supreme court, if underfunded public schools and dilapidated public housing had not defined his adolescence in a segregated slum. His lyricism and poetic nature could have elevated him to prominence in the world of arts, if his struggles with addiction and mental illness had been met with treatment rather than the unforgiving cruelty of the US’s mass incarceration complex. His less ambitious goals later in life – to become a truck driver or to open a small restaurant and provide jobs for the downtrodden – could have been achievable if Derek Chauvin had not ignored his pleas for mercy on that fateful day two years ago.

Instead, we remember Floyd as a man who lived and died under the crushing weight of American racism, a man whose dying cries for his deceased mother struck the hearts of hundreds of millions of people, a man who would end every conversation with the words “I love you” – words he uttered in parting declarations to his family and friends, even as his final breaths were being snuffed out of him.

George Floyd was a man who simply wanted to breathe but ended up touching the world. 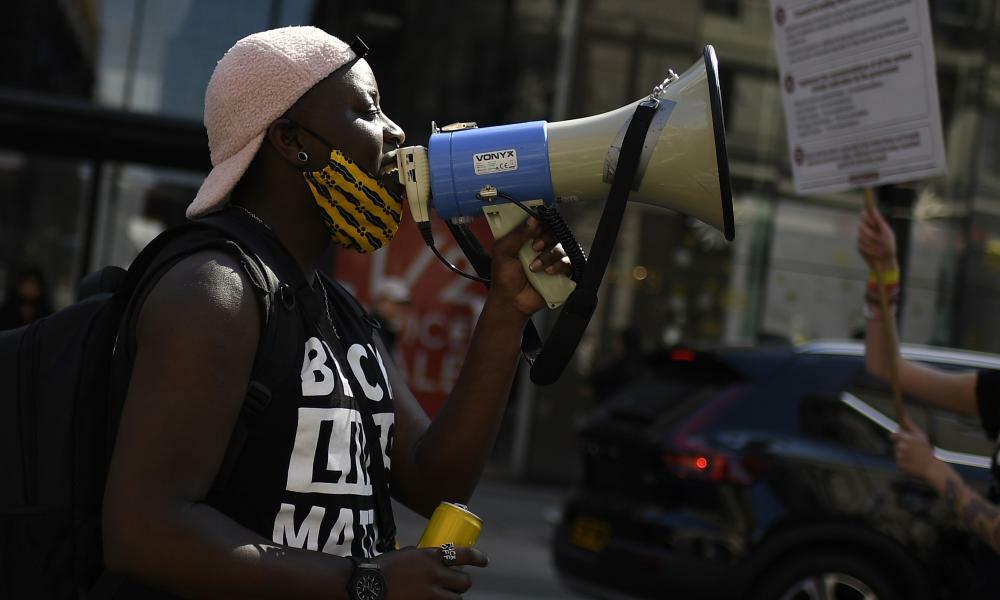 George Floyd’s murder should have been a watershed, but Britain has learned nothing
Black Americans fleeing the racist violence symbolised by events two years ago have not found a sanctuary in the UK,…

The junction where George Floyd died at the hands of Minneapolis police officers has been renamed in his honour.