What we tell ourselves about the Springbok tour 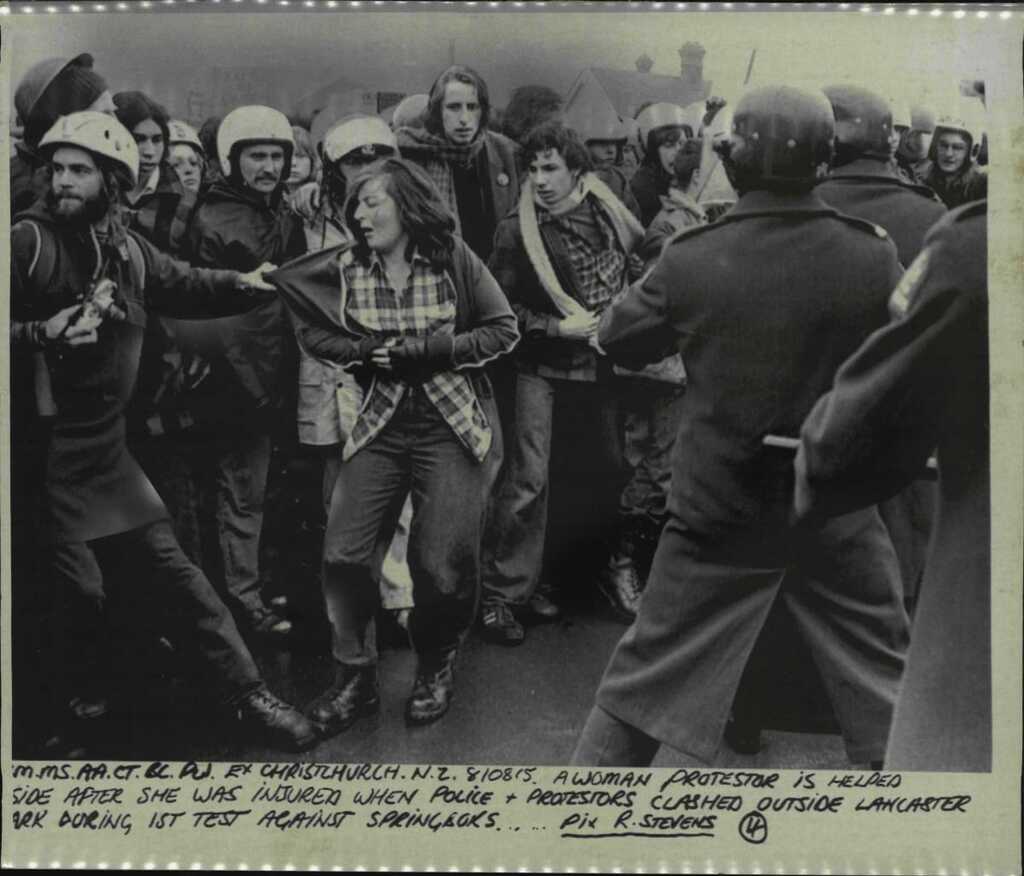 It has been 40 years since the 1981 Springbok tour, but what the tour has meant to New Zealanders has consistently evolved. As ideological and cultural politics have changed, so too has the way we remember New Zealand’s response to the tour, argues Dr Sebastian JS Potgieter.

September 12, 1981 has come to represent the crescendo of the ill-fated Springbok tour. On this day 40 years ago, around 2000 protestors descended on a fortress-like barbed wire-clad Eden Park as the Springboks and All Blacks played a series-deciding final test. Inside the stadium, a light aircraft made low flying swoops over the ground throughout the game, sometimes barely making it over the goalposts, dropping bags of flour onto the field and players. With the Hamilton pitch invasion, the ‘flour-bomb test’ has endured in the public conscience.

Amid a raft of commemorations for the tour’s 40th anniversary, it is worth considering how this day will be remembered and what this tells us about national history making. Most commemorators will likely emphasise the unscripted drama that unfolded inside the stadium, in the skies above it, and in the streets outside. Some will recall the match as riveting, which among the flour bombs ran 10 minutes overtime and took an Alan Hewson penalty to win the match and series for the All Blacks. Others will raise an incident where a group of peaceful protesters outside Eden Park dressed as clowns were senselessly beaten by police. Fewer still will recall that on a tour shrouded in apartheid controversies, the final test was scheduled on the fourth anniversary of the death of activist and founder of South Africa’s Black Consciousness movement Steve Biko, who was murdered while in police custody by white officers.

But the contemporary representation of 1981 as an anti-apartheid endeavour also forgets that the anti-tour movement was as much a critique of New Zealand society.

But likely none will consider that the stories they contemporarily tell about the Springbok tour are as much a product of the time during which they are produced as they are an attempt to recall the past. For in the process of turning the unobservable past into a comprehensible history for the present, we inevitably look at the past through the ideological lens of contemporary values. And as values and the present change, so does the way we evaluated, narrate, and historicise the past. While the past is unchangeable, history is always shifting and evolving as certain parts of the past become emphasised, while other, less palatable parts are forgotten based on what is valued in the present. Exploring what is told about the Springbok tour at a given historical moment can tell us a lot about the social values of the time.

The contemporary emphasis on New Zealand as a bicultural, anti-racist society has meant that 1981 is most commonly ‘remembered’ as the country’s struggle against the horrifically racist apartheid system. But this obscures and forgets the more unpalatable reality that there was substantial support for the tour among many New Zealanders.

Stadiums were sold out and attracted more than three-quarters of the country’s television audience. Few will recall that the predominantly white Springbok team (one player and one manager were not white) received scores of letters from New Zealanders welcoming and supporting them, or that New Zealand’s far right groups, who sought closer relationships between white people across the two countries, enjoyed perhaps their biggest influx of support and highest public profile when rugby ties with South Africa became contested.

Rather than accepting historical accounts at face value, it is important to ask why some parts rather than others endure and come to represent what we ‘know’ about the past.

But the contemporary representation of 1981 as an anti-apartheid endeavour also forgets that the anti-tour movement was as much a critique of New Zealand society. Journalist and activist Geoff Chapple recalled in 1984 that the tour had “grown far beyond the original anti-apartheid issue. It now defined a whole belief system about what was right and wrong about New Zealand itself”.

Apartheid may have catalysed the movement, but the anti-tour protests also became an outlet for many of the domestic social tensions of the previous decades. Protesters raised their frustration at: a conservative government which deported Pacific Island ‘overstayers’, annexed Māori lands but encouraged the immigration of white South Africans; a national sport that promoted restrictive gender roles, toxic patriarchal masculinity, excessive consumption of alcohol and a culture of violence; and institutionalised racism which many Māori linked to the experiences of black South Africans.

Emphasising 1981 as primarily an anti-apartheid struggle obscures the complexity of the anti-tour campaign. It serves largely to construct New Zealand society in a favourable way which forgets some of the unpalatable realities that accompanied the tour.

How the Springbok tour has been understood by New Zealanders has evolved over 40 years (and will continue to evolve) in response to changing material conditions. By treating histories of 1981 as a kaleidoscope of partial, contested and selective narratives which seek to impose particular meaning on the past, we can learn much about the purpose of their creators, the eras in which they were created, and the way we make meaning as a nation more broadly.

Rather than accepting historical accounts at face value, it is important to ask why some parts rather than others endure and come to represent what we ‘know’ about the past.