What’s happening in Kazakhstan? How the protests started and why they’re escalating 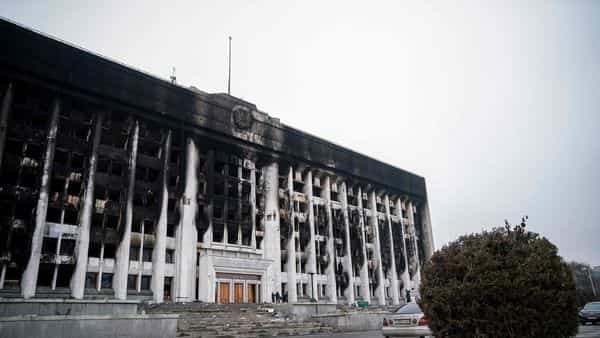 Russian paratroops are in Kazakhstan, providing support to President Kassym-Jomart Tokayev’s authoritarian government after it was rocked by protests over a sharp rise in fuel prices. A clampdown is under way, with Mr. Tokayev saying Friday that he has ordered security forces to shoot without warning.

Since then, authorities say the situation is increasingly under control and nearly 6,000 have been detained in connection with the protests, according to the president’s office. Health authorities say 160 people have been killed in the violence, more than 100 of which were in Kazakhstan’s largest city of Almaty. Kazakhstan is a close ally of Russia, which it borders, and is the largest country in Central Asia.

Russia has more than 75 military transport planes carrying soldiers, armored personnel carriers, supplies and military vehicles into the country. Some 2,500 soldiers are expected to take part in the mission, but that number could rise, according to Russian state news agency, RIA.

The troops will primarily have a support role and guard critical and civilian infrastructure. They are part of a broader Moscow-led security alliance known as the Collective Security Treaty Organization, which was created after the fall of the Soviet Union. Mr. Tokayev said he called for CSTO reinforcements to overcome what he described as a terrorist threat. He has also declared a two-week state-of-emergency in the western Mangistau region and in Almaty. At the height of the violence, Kazakh authorities say demonstrators engaged in rioting and looting and attempted to seize government buildings.

The turmoil nudged up crude-oil prices—Kazakhstan is a member of the OPEC+ alliance—and sent uranium prices higher. Kazakhstan accounts for around 40% of the global supply of the mineral.

On Sunday, U.S. oil major Chevron Corp., which owns 50% in the joint-venture that runs Kazakhstan’s giant Tengiz oil field, said it was returning production to normal after cutting it due to logistical issues caused by protests at the facility, which has an output capacity of 600,000 barrels a day.

What is happening in Kazakhstan?

Starting Jan. 2, protesters took to the streets and clashed with security forces. Footage on social media showed cars set ablaze and police deploying tear gas as crowds tried to storm some government buildings. Almaty residents say they heard gunfire as the demonstrations turned into a broader display of frustration with the country’s leaders. There were local media reports of gunfire at the presidential residence and mayor’s office.

Last week, the government shut down access or disrupted connections to many websites and social-media platforms. Protesters briefly seized parts of the airport, disrupting flights. Gunfire continued through Thursday and into early Friday, residents said.

What led to the protests?

The protests were triggered by the government’s decision to increase the price of fuel, specifically liquefied petroleum gas, which had been price-capped. The increase—which came into force on Jan. 1 and led to the cost of car fuel doubling—threatens to have a significant impact on workers. Though Kazakhstan is an oil-rich nation, the minimum wage is less than the equivalent of around $100 a month. Mr. Tokayev has since said authorities will reduce the price.

What are protesters demanding?

Although the unrest started over the fuel-price increase, protesters are also unhappy with Kazakhstan’s political system and socioeconomic issues. Human-rights activists accuse the government of oppression, including jailing critics, to maintain control. The authorities reject the allegations.

Mr. Tokayev has promised to listen to grievances by establishing a public forum to discuss issues. Political analysts say the government hasn’t always fully implemented its plans for transforming the country and years of tough authoritarian rule have created deep mistrust and demand for change.

Why did the government resign and what comes next?

The Kazakh government resigned under pressure from the escalating demonstrations. Mr. Tokayev accepted the resignation of his cabinet and installed as interim prime minister, Alikhan Smailov, an ally who used to serve as first deputy prime minister.

Mr. Tokayev has promised a political transformation and on Wednesday told the Khabar 24 state television station that he would soon reveal new proposals for reform.

The president accused the protesters of being financially motivated coup plotters and vowed not to flee the country, “no matter what."

Has there been a history of upheaval in Kazakhstan?

Public protest is rare in Kazakhstan, where dissent isn’t widely welcomed or tolerated. However, mass demonstrations erupted just before Mr. Tokayev took office in June 2019. He was handpicked to succeed longtime president and autocrat Nursultan Nazarbayev, who had ruled Kazakhstan since the breakup of the Soviet Union in 1991.

Local critics called Mr. Tokayev’s election undemocratic because other candidates weren’t given a fair chance. Many Kazakhs have long felt sidelined from the political decision-making process.

In 2011, authorities shot at oil workers in western Kazakhstan who were protesting over unpaid wages, killing more than a dozen of them. Human rights workers said the number of dead could have been in the dozens.

What does this mean for Russia?

Kazakhstan shares a trade union and other strategic partnerships with Russia. Mr. Tokayev and his predecessor Mr. Nazarbayev, who has continued to wield political influence behind the scenes, both have the backing of Russian President Vladimir Putin.

Russia’s foreign ministry said last week that Moscow supported “a peaceful solution to all problems within the framework of the constitutional and legal field and dialogue, and not through street riots and violation of laws."

The unrest on Russia’s southern border comes as Mr. Putin tries to fend off what he describes as the West’s encroachment on Moscow’s traditional sphere of influence in Belarus and Ukraine. The Russian leader has amassed tens of thousands of troops on the border with Ukraine, which is seeking closer ties with the West. Mr. Putin has demanded that the U.S. and its North Atlantic Treaty Organization allies forswear any expansion east toward Russia’s borders, in what is turning into a significant security challenge for the Biden administration.