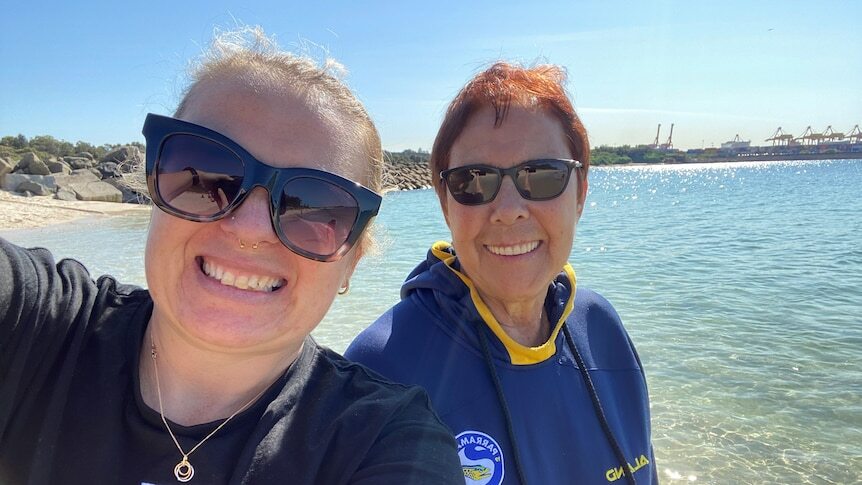 Yuin woman Natalie Williams is a mother-of-two living in a Sydney COVID hotspot.

Determined to keep her family safe, she is debunking vaccine myths and helping her family understand the facts.

Her mum Claudette Chenhall is 70, and a grandmother of seven.

Claudette is currently fighting cancer, and when it was time to roll up her sleeve to get vaccinated, she became worried after hearing about the side effects.

"Why are they only giving AstraZeneca to us? Do they think we're not going to last long?" Claudette asked Natalie.

"No, it's because you're more likely to catch COVID than get a blood clot, Mum," Natalie replied.

After a trip to her chemotherapy doctor, Claudette learned that the benefits outweighed the risks and felt more confident in getting vaccinated.

Vaccine hesitancy isn't exclusive to Aboriginal and Torres Strait Islander communities, but factors like traumatic historical events, barriers to access and supply, and misinformation, have turned a tool of protection into a tool of fear.

Warning: Aboriginal and Torres Strait Islander readers are advised that this article contains an image of people who have died.

Vanessa Lee-Ahmat is a social epidemiologist who specialises in Indigenous health.

She said Australia's colonial history had driven mistrust between Aboriginal and Torres Strait Islander people and the government.

"You just have to look at Charles Darwin. He researched us, categorised us, then humiliated us," said Dr Lee-Ahmat, a Yupinguthi and Meriam woman from Cape York and the Torres Strait.

Numerous records show government officials and scientists taking organs and blood samples of Indigenous people during the 1800s and 1900s (usually without consent), and using them for research and experiments, some of which are still sitting in labs and museums today.

This "research" influenced the theory behind the assimilation policy established by the government where Aboriginal and Torres Strait Islander children were forcibly removed from their parents and assimilated into "white Australia".

It wasn't until 1973 that all parts of Australia had formally abolished the policy.

When the COVID-19 vaccine rollout for Aboriginal and Torres Strait Islander people started in phase 1B, Europe simultaneously made the decision to suspend the use of AstraZeneca due to increased cases of blood clots.

A month later, Australia reported its first death linked to the AstraZeneca vaccine.

With little or no access to Pfizer, fear began to emerge in some communities that this was another social experiment.

Vaccine misinformation 'filling in the gaps'

Another hesitancy factor has been the continuing change in advice around vaccine options and age groups.

"We know that there was a small group of Aboriginal people in the country that had adverse events, which then drove more of a vaccine hesitancy across Aboriginal communities."

This has left communities feeling confused and worried, said Vicki O'Donnell, chairperson of the Aboriginal Health Council of Western Australia.

"We had to do a lot of community sessions around trying to inform and educate that blood clots were like one in a million," she said.

"It doesn't matter what [vaccine] you bring in after that, the same thing happened … people were still hesitant."

In addition to this, Ms O'Donnell, who is also the chief executive officer of the Kimberly Aboriginal Medical Service in Broome, said there was a gap in the way information was being shared.

"A lot of people are saying they feel sorry for NSW, but [when] you say, 'Do you know there is over 800 of our mob sick with COVID?', they can't believe it," she said.

"The numbers don't get told at the press conference, so some people think it's only 'white people' with COVID."

"If you home in on some communities, you'll find there's been no vaccination at all," Ms O'Donnell said.

"There's all these rumours around '666' and collecting or changing your DNA, so we're working hard to combat this."

But Dr Lee-Ahmat said official health messaging from the government could have helped debunk these myths and bridge the information gap sooner.

Because Indigenous health experts and medical services have been quick to keep COVID out of their towns, some communities feel safe without the vaccine.

But as discussions evolve around opening borders, Indigenous health practitioners are advocating for at least 90 to 95 per cent of Aboriginal and Torres Strait Islander people to be vaccinated first, to avoid another outbreak like in western NSW.

First-dose vaccination rates for First Nations people are currently about 20 per cent lower than the national average.

Experiences of racism within the healthcare system have also created hesitancy when the closest vaccination option is only available at a mass hub, hospital, or with an unfamiliar GP.

Aboriginal medical services across the country have demonstrated the success (and need) for specialised knowledge, culturally safe spaces, and trusted health experts to protect and service Indigenous communities.

That's why community leaders and health experts like Donna Ah Chee are ramping up vaccination drives and fighting hesitancy to protect communities from "not if, but when" COVID hits.

Health workers are doing outreach as part of a six-week vaccination programme that involves visiting clients in their homes and setting up clinics in accessible locations like shopping centres and town camps.

"We've created social media posts to debunk myths, as well as promoting good news stories in communities where there have been successful vaccinations," said Ms Ah Chee, who is the CEO of Central Australian Aboriginal Congress.

"The good news is that Aboriginal people over 60 who are our highest risk group, 42 per cent are fully vaccinated and a further 10 per cent had their first. That's more than half of our older people already protected.

"The best thing we can do is to get vaccinated now.