From Kate McKinnon’s first sketch on Saturday Night Live, in 2012, it was evident she’d be a star. Appearing in a Pantene commercial as Penélope Cruz, alongside then-host Sofía Vergara, McKinnon delivered Cruz’s Castilian Spanish accent with a winking twist. While Vergara focused on highlighting all of the healthy, easy-to-say ingredients, such as “aloe,” McKinnon as Cruz was left to outline the harmful, difficult-to-say ingredients the shampoo didn’t contain, such as “ammonium laureth sulfate.” McKinnon clearly relished the opportunity to build a character around that pronunciative challenge—a spirit that served her well, carrying her through 10 years of notable celebrity impressions and oddball characters, such as the senior-cat-adoption advocate Barbara DeDrew and veteran actor Debette Goldry.

Last night, SNL said goodbye to McKinnon, as well as the longtime cast members Aidy Bryant, Pete Davidson, and Kyle Mooney, in its season finale. Rather than make abundant space for McKinnon throughout the episode, the show mostly contained its farewell to the cold open. She returned as Colleen Rafferty, whose alien encounters came closer to tawdry sexcapades that made the host involved in each sketch break character. (Ryan Gosling started the trend in 2015.)

This time, Rafferty detailed her wildly unkempt pubic hair, which fascinated the “little gray aliens with the big dumb eyes” who’d abducted her. “I got more hair poking out the sides than a hipster’s beard stuffed into an N95,” she delightedly said. After sharing more lurid details, Rafferty agreed to help out the U.S. government by permanently leaving with the aliens. The sketch cut to a spaceship door; McKinnon made her way over to it, braced herself against the frame, and took a deep breath. “Well, Earth, I love ya. Thanks for letting me stay a while,” she said, before emotionally uttering “Live from New York, it’s Saturday Night” on her own.

It was a stirring, special moment that recognized all that McKinnon had accomplished on—and contributed to—the series since she began as a feature player in 2012, when Bill Hader, Fred Armisen, Jason Sudeikis, and Seth Meyers were still a part of the show. By the next season, they’d all depart for new opportunities (Meyers left halfway through the 39th season). It’s never easy when SNL loses such formidable talent in bulk, and McKinnon stepped in to carry a lot of that slack as a repertory player.

In many ways, McKinnon has been the heart of SNL since arriving a decade ago. As an ensemble comedy, the show requires cast members who support one another in service of a sketch—a lesson it learned after Chevy Chase’s departure following the first season. McKinnon’s talent pulled the spotlight, but she was an equally adept scene partner. She didn’t use her talents to isolate herself. Instead, she put nervous hosts at ease and warmly made room for everyone to do their best. The results read on camera: She always seemed like she was having the most fun.

As the show’s first openly gay woman, and thanks to her time on The Big Gay Sketch Show, McKinnon played queer characters in a way that punched up. That satirical playfulness brought greater visibility to LGBTQ characters on what’s arguably the best-known comedy stage in the world. Still, when given the opportunity to use SNL’s conspicuous platform, she would speak up and out, as she did against Florida’s recent “Don’t Say Gay” bill.

McKinnon was also a deft—and fluid—political impressionist, delivering takes on women and men alike. She played former German Chancellor Angela Merkel, former U.S. Attorney General Jeff Sessions, and former New York Mayor Rudy Giuliani, among many others. She took over impersonating Hillary Clinton from Amy Poehler, handling the 2016 presidential election, which included a somber, moving cold open after Clinton’s surprising loss. But it was her impression of former Supreme Court Justice Ruth Bader Ginsburg that tended to go viral thanks to her saucy interpretation of the famed legal mind.

[Read: ‘The timeline you’re all living in is about to collapse’]

Bryant joined SNL the same year as McKinnon, and brought a tempered sweetness to her time on the series. Last night, she appeared in one last “Trend Forecasters” with Bowen Yang, where the forcefully chic duo covered summer fruit, greeting, and time trends. The “Weekend Update” bit turned sentimental near the end. “In: 10 nice years,” Bryant said with a smile. Yang responded, dropping his affectation, “In: a friend I couldn’t have done this without.”

Davidson also said goodbye on “Weekend Update,” using the monologue format he’d often employed over his nine seasons to discuss more personal matters, like being diagnosed with borderline personality disorder. In many ways, his life—and who he was dating—overshadowed his comedy, a fact he called out last night. “I became hugely successful from barely showing up to work,” he said. In between punch lines, Davidson grew surprisingly earnest: “I remember when I auditioned for SNL, [the show’s creator, Lorne Michaels,] looked me right in the eye and said, ‘I don’t … think you’re right for this show, so let’s screw this up together.’ And that’s exactly what we did.”

Mooney’s goofy-chill demeanor landed him a spot on the show in 2013. Often relegated to supporting work during live sketches, his comedic sensibility came across best in the various digital shorts he developed, including an ongoing bit about his fake relationship with his fellow cast member Leslie Jones. Last night, he appeared throughout the episode but never in a way that overtly acknowledged that it was his last. In the final sketch, however, he stood alongside McKinnon and Bryant in a commercial parodying pigtails for graying senior women. “He’s like if a guy was magic, and we’ll love him forever,” Bryant said about his character, Richard, but the line resonated on a deeper level about Mooney himself.

It’s not unusual for several cast members to depart SNL at the end of a season, but in losing McKinnon, the show is losing its anchor. It has survived such losses before, but with its 50th anniversary quickly approaching, and with grim headlines and a global pandemic still creating problems for the comedy institution, it’s unclear what will develop in her absence. In the meantime, I, for one, can’t wait until she returns to host. 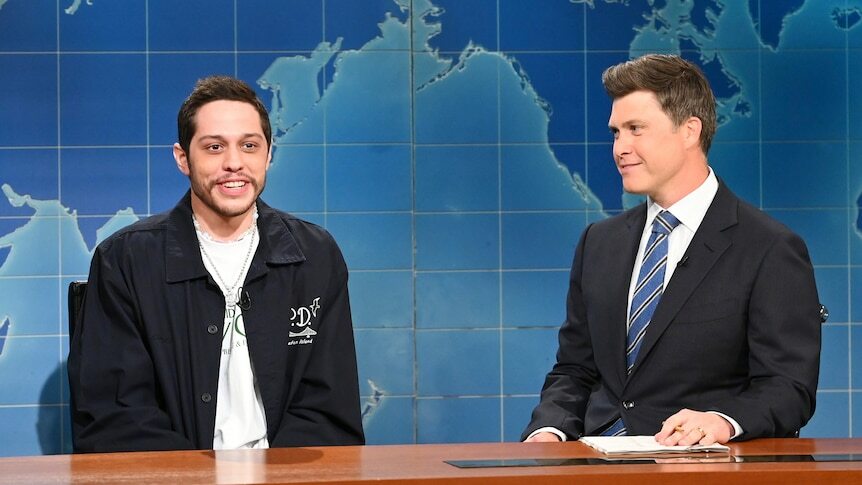 Kate McKinnon and Pete Davidson are among those to depart Saturday Night Live, leaving the US sketch show without arguably…