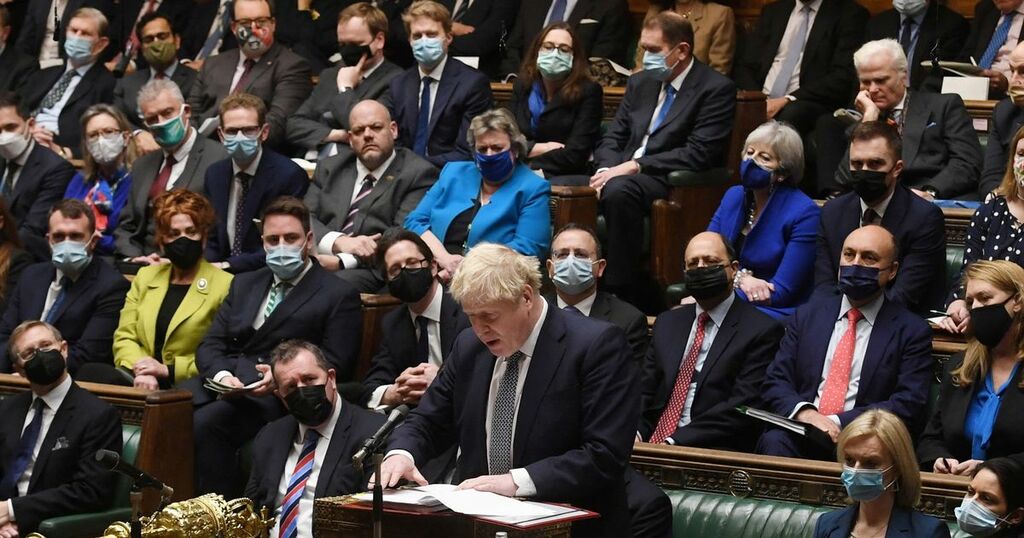 Boris Johnson is battling for his political life after he admitted spending 25 minutes at a No10 garden party in the height of lockdown.

And if he doesn’t quit, the Prime Minister could - sooner or later - feel the hands of the ‘men in grey suits’ at the top of the Tory party.

Tory MPs have the ability to trigger a vote of no confidence - which if the PM loses, would then lead to a full-blown Conservative leadership election.

The 1922 Committee, the group for Tory backbenchers which runs leadership elections, was meeting this afternoon to discuss next steps.

Mr Johnson was only ever propped up by unrelated Tory factions who were united by their belief that he wins elections and is popular.

Even before he admitted attending a staff bash on 20 May 2020 - while Brits were banned from gathering outdoors - a poll found two-thirds of the public thought he had to quit.

And after today’s bizarre half-apology, where he claimed he thought it was a work event despite invitees being told “bring your own booze”, the vultures are circling for the Tory leader.

Douglas Ross, the leader of the Scottish Tories, said Boris Johnson should resign. Backbencher Sir Roger Gale said Mr Johnson misled parliament and called for him “to go with dignity as his choice, or for the 1922 Committee to intervene".

But this doesn't in any way mean a resignation or challenge are imminent - even with the levels of fury in the Conservative Party as they are.

The process for MPs to topple him is far from a simple one.

Boris Johnson has made clear he does not intend to resign, even though his Press Secretary did not rule it out.

And already ministers are desperately rallying round their leader, with Nadine Dorries saying he was “right to apologise” and Priti Patel pleading with MPs in a WhatsApp group to back the PM.

What happens if Boris Johnson resigns?

Tory MPs and members hold a leadership contest to choose a new leader - and therefore the new Prime Minister, without an election.

This happened in 2019, when Theresa May resigned after months of backbiting.

The exact rules of each Tory leadership contest vary, but there are two stages and the process takes a couple of months.

First, Tory MPs whittle the field down to two candidates. This allows factions of MPs to ‘stitch up’ the shortlist to keep extreme candidates off the ballot paper.

The whittling takes place in rounds of votes, generally held on Tuesdays and Thursdays.

The MP with the fewest votes each time gets eliminated, along with any MPs who’ve fallen below a minimum number of votes for that round.

Then, the 100,000 or more Tory members hold a one-member-one-vote election to pick between the top two.

The winner becomes leader of the Conservative Party, and goes to Buckingham Palace to ask the Queen to appoint them as Prime Minister.

If Boris Johnson refuses to resign, can he be sacked?

Yes - but it's not easy. Tory MPs trigger a no confidence vote in their leader at any time if 15% write to the chairman of the 1922 Committee.

Currently there are 360 MPs with the Tory whip, so what means 54 of them need to send letters.

A letter is held on file by the '22 chairman until it is withdrawn by the MP who sent it. The chairman keeps a secret running tally of how many letters he has, and only makes an announcement if it tips over the 15% threshold.

But 50% of MPs need to vote “no confidence” for the motion to pass. Theresa May’s critics were undone by this in 2018, when they triggered a no confidence vote - but she then won it.

And once a Tory leader wins a no confidence vote by their party, they cannot be challenged again for a year.

Is there a general election if Boris Johnson resigns?

The timing of the next election is up to the Prime Minister. It’s due in autumn 2024 - or earlier.

But this law (the Fixed-Term Parliaments Act) is being repealed.

And more importantly, MPs almost never vote ‘no confidence’ in their own party’s government, no matter how cross they are. The PM’s 80-odd majority makes this option vanishingly unlikely.

Who is in charge after the Prime Minister resigns or is sacked?

To resign as PM he must go to Buckingham Palace and offer his resignation to the Queen. He has a role in naming his successor, based on who can command the confidence of Parliament.

Importantly, he has some control over the timing of this.

Theresa May resigned as Tory leader in 2019 but remained as a ‘caretaker’ - or ‘lame duck’ - Prime Minister until her succession was chosen.

If Boris Johnson resigns as PM before a successor is chosen, the Cabinet Manual says it is “for the party or parties in government to identify who can be chosen as the successor”.

This suggests the Deputy Prime Minister Dominic Raab - who stood in for Mr Johnson when he was in ICU with Covid - or someone else senior could take the role temporarily.

But recent precedent suggests the current PM staying on as a caretaker is more likely.

Who could the candidates be for Tory leader?

Chancellor Rishi Sunak and Foreign Secretary Liz Truss are the two names that come up most frequently in Westminster.

They have blatantly promoted their own personal brands, including with flattering photos by taxpayer-funded government PR photographers.

However, moderate Tories could try to stop right-winger Ms Truss getting on the ballot when MPs whittle downtime list.

Sources have claimed allies of Mr Sunak want to get him and previous candidate Jeremy Hunt, now chairman of the Commons Health Committee, as the final two.

There can be dark horses too. Last time, Rory Stewart turned out to be a surprise hit with MPs before he was eventually whittled out.