What Footage of the Beirut Explosion Tells Us About the Blast

The massive explosion in Beirut’s port Tuesday shattered windows more than a mile away and sent a plume of smoke and debris soaring above the city’s tallest buildings.

It was so intense that the blast was felt at least 150 miles away in Cyprus. It killed at least 135 people, injured at least 5,000 and left dozens missing. Some 300,000 other people have been displaced from their homes.

The Times reviewed more than 70 videos of the incident and satellite images of its aftermath to better understand what happened.

Here’s what the available visual evidence tells us about the blast and the devastation it left behind.

A Raging Fire that Spread

The explosion that ripped through large parts of Beirut was preceded by a raging fire in a port warehouse. A correspondent for The Los Angeles Times first reported the fire around 5:54 p.m. local time, posting an image of the smoke on Twitter and noting the sound of an explosion. For the next 14 minutes, the fire blazed as emergency workers responded.

A video filmed from a nearby high-rise captured what happened next. Emergency vehicles with flashing lights can be seen responding to the fire and smoke, and other videos posted on social media showed firefighters in action at the warehouse at roughly the same time. Then, the blaze appears to rapidly accelerate, followed by a large explosion. Thirty-five seconds later, at around 6:08 p.m. local time, a final, massive blast completely envelops the area.

According to the Lebanese government, the source of the explosion was 2,750 tons of ammonium nitrate, an explosive chemical often used as fertilizer and sometimes in bombs, which had been stored in the port warehouse after being confiscated from an abandoned Russian-owned ship in 2014. In the following years, court records show, senior customs officials had tried and failed to win court permission to remove the dangerous stockpile by donating it to the Lebanese army or selling it to the privately owned Lebanese Explosives Company.

Such a stockpile, if ignited, could easily cause the kind of blast and devastation seen in Beirut.

Lebanon’s National News Agency reported that the fire first ignited fireworks, and some videos showed flashes that could indicate fireworks and would not have been caused by ammonium nitrate.

Another news channel, LBCI, reported that welding work being conducted on the warehouse started the fire.

Whatever caused it, the fire apparently spread to the ammonium nitrate.

The dark and reddish color of the debris and smoke cloud that towered above the blast suggests two things: that ammonium nitrate was present and that it was not military grade, according to Dr. Rachel Lance, an explosives expert. Explosions with extremely dark smoke plumes indicate that not all of the explosive material burned up, meaning it was not a military explosive, and ammonium nitrate burns reddish, she wrote in an email.

Satellite images taken one day later show the scale of the explosion and confirm its exact location, a warehouse next to the Beirut Port grain silos. Only a gaping hole filled with water, approximately 460 feet in diameter, is left where the warehouse stood.

The images show how the explosion destroyed or damaged most structures in the port, over an area of about 160 acres. Only the container terminal to the east appears to remain largely intact.

The explosion was so intense that it capsized a large ship 1,500 feet to its east. The 390-foot-long passenger ship, Orient Queen, can be seen flipped to its side in satellite images. Outside the commercial port area, an entertainment arena collapsed, and debris from damaged buildings litters the street.

The most dramatic videos of the blast show a white dome expanding rapidly through the air. This is an overpressure wave caused by the mass of exploding ammonium nitrate pushing molecules of humid air against each other as it moves. The wave reflects and bounces, destroying some buildings while leaving others relatively undamaged. Some people on social media misinterpreted it as an atomic “mushroom cloud”.

While we don’t know how the ammonium nitrate was stored in the warehouse, which would affect its explosive power, the chemical can be as much as 40% as powerful as TNT. The detonation of 2,750 tons of ammonium nitrate would make the Beirut event one of the most powerful accidental industrial explosions on record and could produce enough overpressure to shatter glass 1.25 miles away.

Beirut’s port is centrally located, and thousands of people live in residential neighborhoods along the seaside within a mile of the blast. Videos showed the pressure wave flattening cars and speeding destructively through churches, mosques, apartments and shopping malls, including the Beirut Souks, which opened in 2009 after being rebuilt following the civil war.

At least five hospitals were located within 1 1/4 miles of the explosion, and around a dozen more were close enough to feel its effects.

Images showed shattered glass and destruction inside rooms at the American University in Beirut Hospital, 1.86 miles away. At BMG Bikhazi Medical Group, about the same distance from the blast, a doctor said the ceiling had fallen on some patients.

“The pressure was horrific. We heard a boom, then everything was shaking,” he said.

Nurses and doctors at some hospitals were forced to turn patients away and treat others in dark parking lots by the light of their phones.

Inside the port itself, the blast ruined the country’s main grain silos, spilling 15,000 tons of their contents onto the ground, according to the economy minister. Lebanon now has less than a month of grain reserves but is expecting enough imports to avoid a crisis, the minister said.

Beirut was not the first place to suffer horrific damage from an ammonium nitrate explosion.

In 2015, 800 tons of ammonium nitrate ignited in one of China’s busiest seaports, in Tianjin, causing a blast that killed 173 people and injured nearly 800. 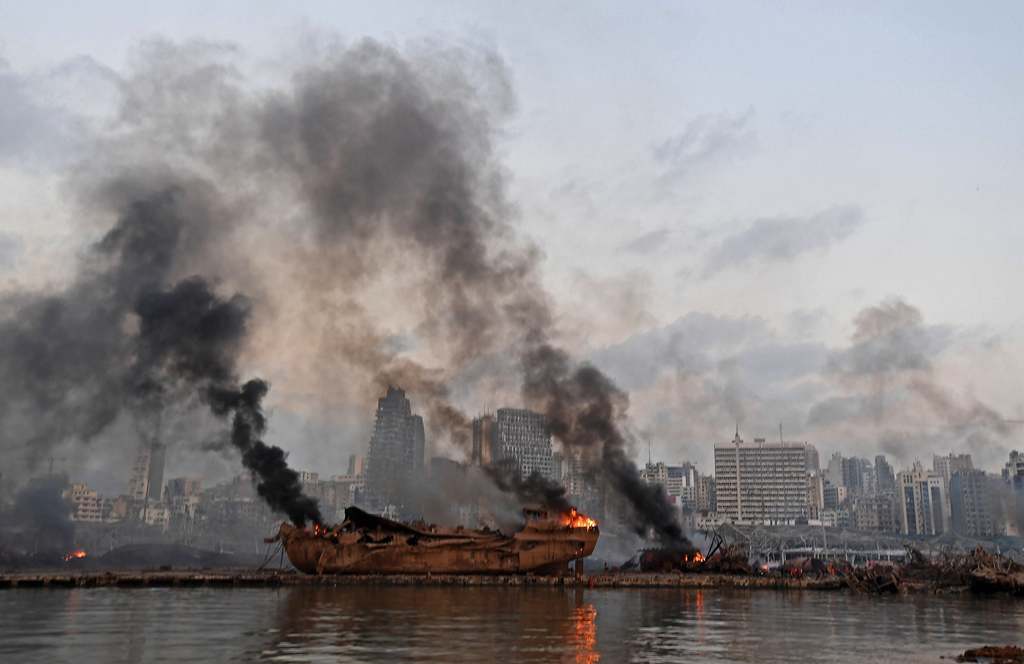 Ammonium nitrate: What is the chemical blamed for Beirut explosion, and how could it produce such a powerful blast?
When heated, ammonium nitrate includes all of the components required for a fast-burning fire

Beirut: Tuesday’s blast killed at least 149 people and wounded more than 5,000. It struck with the force of an earthquake,…