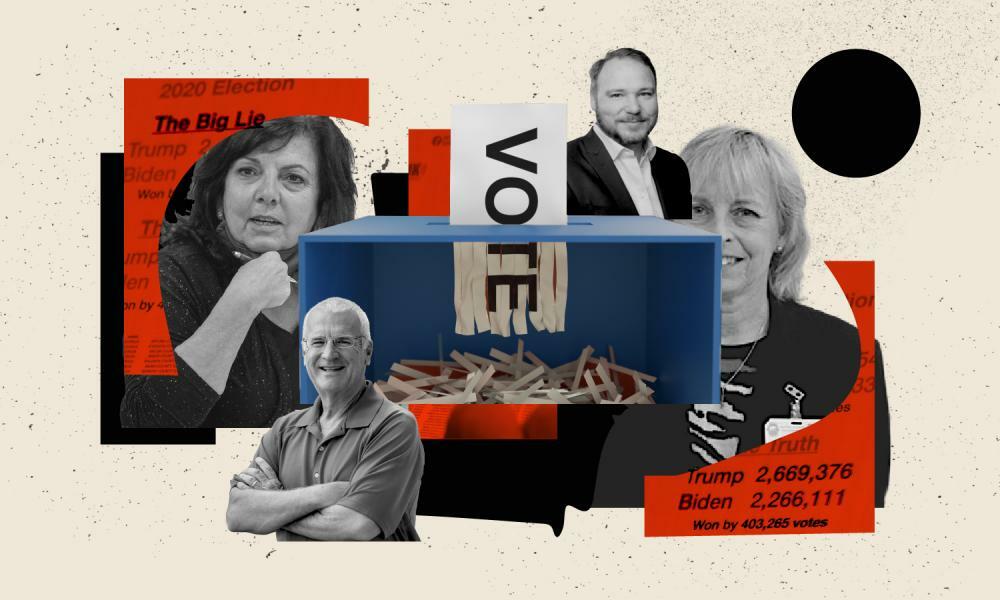 Revealed: election conspiracy theorists work as election officials across Georgia
Officials with extensive power over election administration in at least seven counties of crucial swing state found to have promoted…

Many voters with disabilities rely on a loved one or caregiver to return their absentee ballot for them. Wisconsin's high…

Ballotpedia
One subscription that gives you access to news from hundreds of sites
Republicans respond to potential South Philly ‘ballot harvesting’ by GOP operative with firings, campaign attacks
PHILADELPHIA — The fallout from the discovery of a potential GOP “ballot harvesting” operation in South Philadelphia continued Tuesday, as…

What '2000 Mules' leaves out of ballot harvesting claims

Based on these unproven allegations, the documentary-style movie jumps to the conclusion that the election was stolen.

The 1 1/2-hour film leaves voters uninformed about precautions that help prevent mass absentee ballot fraud, instead encouraging them to believe elections were subverted by a shadowy cabal of nonprofit organizations.

The movie hinges on the theory that 2,000 people in five states, including 242 in metro Atlanta, collected and delivered multiple absentee ballots, a practice called "ballot harvesting." Georgia law prohibits voters from delivering anyone's ballot besides their own, with exceptions for family members and caregivers of disabled voters.

While it's possible that some of the alleged perpetrators shown in the movie actually committed a crime, video surveillance of drop boxes alone doesn't prove anything. Voters might have been delivering ballots for their relatives, which is allowed.

Even if there were a ballot harvesting scheme, it wouldn't invalidate legitimate ballots just because they were turned in by unauthorized individuals. Verified ballots of registered voters still count, regardless of how they were delivered.

Election investigators have reviewed several videos included in "2000 Mules" and found no illegal behavior, including a video that showed a Gwinnett County man inserting ballots into a drop box, according to the secretary of state's office.

"We investigated, and the five ballots that he turned in were all for himself and his family members," Republican Secretary of State Brad Raffensperger said during a debate last week.

In the movie, D'Souza promotes allegations made by True the Vote, a Texas-based organization that gathered drop box surveillance video and cellphone location data in parts of Georgia, Arizona, Wisconsin, Michigan and Pennsylvania. All were swing states where Biden won.

True the Vote hasn't cooperated with Georgia's election investigations, refusing to disclose the names of people who allegedly harvested ballots. The State Election Board issued subpoenas on the organization last month to seek documents, recordings and names of individuals involved.

The organization also doesn't explain how ballot harvesting could have occurred.

Every absentee ballot is assigned to the voter who requested it, and voters can only cast one ballot each.

Returned ballots must be included in an envelope that includes the voter's registration information, signature, and a bar code. Ballots delivered without an envelope aren't counted, meaning ballot-stuffing wouldn't work.

True the Vote claims that cellphone location records show that "mules" visited multiple drop boxes in a day, but publicly available location data often aren't accurate enough to prove that people actually stopped at drop boxes. They could have been driving by drop boxes on busy streets as they travel to and from work.

None of the surveillance videos in the movie show anyone visiting more than one drop box in a day.

A map of downtown Atlanta displays cellphone travel patterns, but few of them intersect with drop boxes, which were required to be located on government property such as the Fulton County Government Center.

True the Vote founder Catherine Engelbrecht said in the movie that her organization tracked cellphones that were near both drop boxes and unidentified nonprofit organizations, which she believes coordinated the ballot harvesting operation.

"What does this even mean if this is happening in broad daylight and nobody's doing anything to stop it?" Engelbrecht said. "It won't stop unless we stop it."

"What has not been provided is any other kind of evidence that ties these cellphones to ballot harvesting," wrote GBI Director Vic Reynolds in a Sept. 30 letter. "As it exists, the data, while curious, does not rise to the level of probable cause that a crime has been committed."

While the movie blames drop boxes for enabling ballot harvesting, it ignores the fact that multiple ballots could more easily be returned through the Post Office or home mailboxes, where there isn't video surveillance. There's no indication of ballot harvesting in mailed ballots during the 2020 election.

D'Souza, the filmmaker and narrator, has produced several movies and books that promote conspiracy theories and right-wing propaganda, including "The Big Lie: Exposing the Nazi Roots of the American Left" and "Hillary's America: The Secret History of the Democratic Party."

D'Souza pleaded guilty to a felony campaign finance violation in 2014 for using straw donors to exceed contribution limits to a Republican candidate running for a U.S. Senate seat in New York. Trump pardoned D'Souza in 2018.

The movie, which costs $29.99 to stream online, ends with a QR code that directs voters to a website where they can donate money to True the Vote.

Revealed: election conspiracy theorists work as election officials across Georgia
Officials with extensive power over election administration in at least seven counties of crucial swing state found to have promoted…

Many voters with disabilities rely on a loved one or caregiver to return their absentee ballot for them. Wisconsin's high…

Ballotpedia
One subscription that gives you access to news from hundreds of sites
Republicans respond to potential South Philly ‘ballot harvesting’ by GOP operative with firings, campaign attacks
PHILADELPHIA — The fallout from the discovery of a potential GOP “ballot harvesting” operation in South Philadelphia continued Tuesday, as…