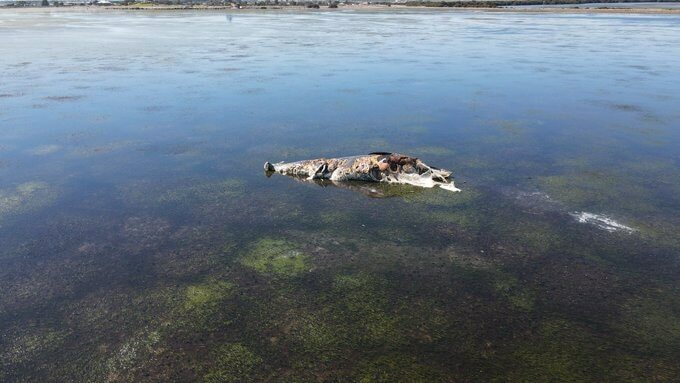 The saga surrounding the fate of a dead whale carcass off an Adelaide beach remains unresolved, with a local resident saying she is concerned about the smell and the environmental impact as the giant corpse decomposes.

The dead whale's remains were first spotted more than two weeks ago in the Port River, where it attracted interest among onlookers as well as circling sharks.

Gruesome video showed the whale, which was hit by a ship, being mauled by two great whites.

The carcass — which was later identified by the Department for Environment and Water as a type of baleen whale known as a sei — was shifted by several high tides to Section Bank, off the northern end of Torrens Island, between Outer Harbor and St Kilda.

It is currently about 400 metres from St Kilda embedded in shallow tidal mudflats.

"Its current location has made it difficult to access and remove," the department said in a statement.

"Several attempts have been made to tow the whale carcass out to sea when it first became stranded within Port River shipping channel.

"These were unsuccessful due to safety concerns as the carcass was being mauled by several large great white sharks."

St Kilda kiosk owner Robyn Cook this morning told ABC Radio Adelaide she was concerned about the odour emanating from the animal, especially as the weather gets warmer.

"It's drifted over to St Kilda and now it's stuck on the flats," she said.

"I'm not looking forward to summer if they can't move it.

"They were trying to move it, but they've left it too long now and now it's stuck.

"I was told yesterday that the jaw is actually embedded, and those jaws are pretty heavy."

Ms Cook said she remembered the time, in 1989, when the remains of a blue whale — the bones of which are now in the SA Museum — became stuck at St Kilda.

"They had to cut it up out there, we had whale blubber up the channel for weeks," she said.

"It drifts around to this area and then the flats out there are too shallow.

Senator Rex Patrick is also pushing for the sei whale to be removed.

"If this rotting whale were lying off Glenelg or Henley, it would've been removed by now," he tweeted this morning.

"Because it's only the 90 St Kilda residents and children who visit the local renowned playground that have to endure the stench, nothing's been done."

But the environment department said one option was now leaving the whale to decompose, after a "number of attempts" to move it from its current location had failed.

"A plan was established to attempt to move the whale so that the South Australian Museum could take tissue samples and reclaim the skeleton, as they do not have samples of this species in their collection," a spokesperson said.

"These [attempts] were unsuccessful due to the shallow waters and state of decomposition meaning it will not float.

The spokesperson said the department was continuing to work with the SA Museum and the local council on options to remove it, including engaging "commercial operators with specialist equipment".