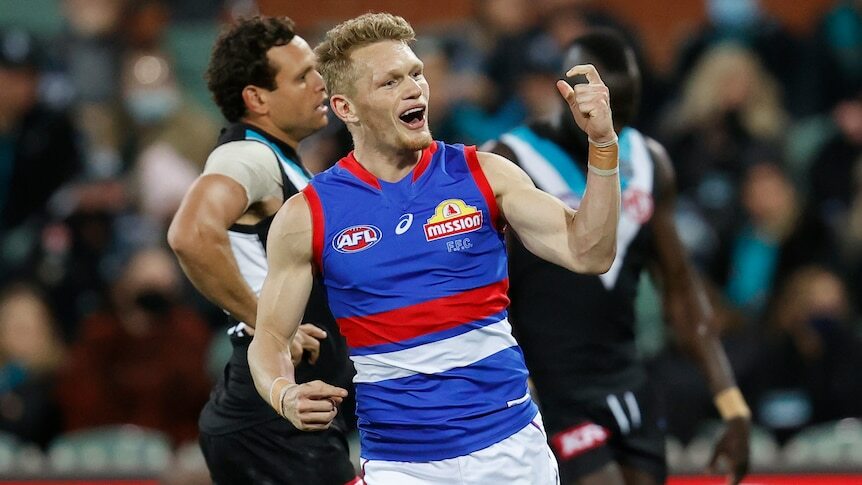 The Western Bulldogs have demolished Port Adelaide by 71 points to advance to the AFL grand final against Melbourne.

The Bulldogs produced a stunning first-half blitz en route to a 17.14 (116) to 6.9 (45) victory in Saturday night's second preliminary final at Adelaide Oval.

The win puts them into their first AFL grand final since their drought-breaking premiership victory five years ago.

The September 25 season-decider in Perth will only be their fourth VFL/AFL grand final appearance, with wins in 2016 and 1954, and a runner-up finish in 1961.

The Demons, who clobbered Geelong by 83 points in their preliminary final on Friday night, are chasing their first flag since 1964.

The unfancied Bulldogs booted the initial five goals in a seven-goal opening term to lead the Power by 37 points at quarter-time.

The Bulldogs held sway in the second half, despite losing Laitham Vandermeer to a hamstring strain.

They had 10 goal kickers, headed by four from the brilliant Bailey Smith, three from Mitch Hannan, and two apiece from Aaron Naughton and skipper Marcus Bontempelli.

Smith (23 disposals) was superb while Bontempelli (20 disposals) showed no signs of a knee injury suffered late in their semi-final win against the Brisbane Lions.

Winger Jack Macrae (36 disposals), Bailey Dale (24) and Caleb Daniel (22) were prolific ball-winners, while Adam Treloar rebounded from his quiet semi-final with 23 disposals and a goal.

The Power have now lost consecutive home preliminary finals, after going down in last year's edition to eventual premiers Richmond by six points.

As impressive as the Bulldogs were in the match-defining first half, the Power offered meek resistance. Their opponents dominated contested possessions and led that key statistic by 26 at the main break.

And when the ball was in dispute, the Bulldogs were invariably first to the football. They led ground-ball gets by a whopping 61-29 late in the second term.

The Bulldogs' first-term assault was triggered by a Bailey Smith goal only 46 seconds into the final. Some 14 minutes later, the visitors led 31-0.

The shell-shocked Power could not muster a score until an accurate Wines snap in the 21st minute.

The Bulldogs piled on five goals to two in the second stanza, with a classy long-range major from Bontempelli putting them 59 points up just before half-time.

The Power belatedly showed some spark in the third term, booting the initial two goals.

But the Bulldogs then put the clamps on before kicking two late majors to restore a 58-point lead at three quarter-time.

The Bulldogs increased their margin in a tame last term.