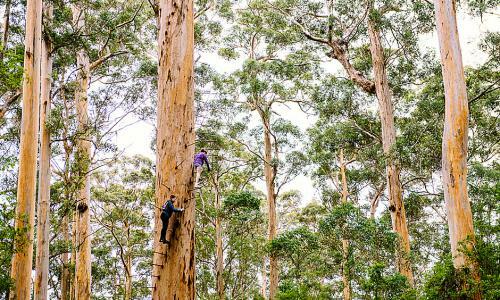 Native forest logging in Western Australia will end at the start of 2024, the state government has announced, in a decision hailed as historic by the premier, Mark McGowan, and conservation campaigners.

In a statement on Wednesday morning, McGowan said the state’s next forest management plan – covering the period 2024-2033 – would not include native forest clearing, and the government was spending $350m to expand softwood timber plantations and $50m to support affected workers and communities.

Activists said it meant Western Australia would be the first Australian state to end native forest logging, ahead of Victoria’s promised phase-out in 2030.

The decision is restricted to forestry, and does not prevent clearing of native forests for mining. McGowan said it would preserve at least 400,000 hectares of karri, jarrah and wandoo forests, and another 9,000ha of high-conservation karri forest would receive immediate protection.

“This is a historic moment for the protection of our magnificent forests and the creation of sustainable WA jobs,” he said.

“By transitioning more of the forestry industry to sustainable timber products like softwood, we are investing in WA’s future, supporting the construction and forestry industries, and our regional communities. Protecting this vital asset is critical in the fight against climate change.”

Foresters said they were blindsided by the announcement. Melissa Haslam, executive director of Forest Industries Federation WA, said the industry was in “a total state of shock’”, and that some members learned of the decision via the radio.

“We are shocked at this rushed and bizarre decision, which came without any consultation,” she said.

Jess Beckerling, campaign director with the WA Forest Alliance, said the decision was “huge” and praised the government for making a “long-awaited breakthrough”.

“The south-west forests are incredibly precious and they’re vital to climate and to wildlife, water and culture,” she said. “This new direction that the premier has announced today to end native forest logging in just over two years’ time is profoundly important and will be heartily welcomed by the West Australian community.”

Beckerling said the announcement was “not the end” and campaigners would push to ensure the forest management plan was delivered as promised. She said the decision did not address all threats facing the forests as jarrah forests could still be cleared for bauxite mining by Alcoa, and regrowth forests would still be “thinned” through selected tree removal.

“It also doesn’t address fire management,” she said. “There will, however, be plenty of opportunities coming up for the community to have an effect on these other major issues facing the forests during the development of the next forest management plan.”

The decision follows a decline in native forestry and a rise in plantation timber. About 90% of the state’s timber comes from plantations.

Haslam said the announcement was “heartbreaking” for those working in the industry in regional areas, but would affect most Western Australians. “Anyone who enjoys products from timber furniture right through to firewood,” she said. “The irony is this does not even protect our forests. Forest management protects our forests.”

The federal assistant minister for forestry and fisheries, Jonno Duniam, said the WA Labor government of “selling out” its forestry industry. “This decision is a complete nonsense given the fact that native forestry is done better here than anywhere else in the world,” he said. “Every tree that is harvested as part of native forestry is regrown.”

McGowan said the government would support at least an extra 33,000ha of softwood timber plantations. He estimated up to 50m pine trees would be planted, about 140 timber industry jobs would be created and about 1,980 existing jobs would be retained.

The Wilderness Society praised the decision, and said it followed “tireless campaigning” led by the WA Forest Alliance. The society’s national campaigns director, Amelia Young, called on the WA government to also protect jarrah forests near Perth from mining, and urged other states to follow McGowan’s lead.

“The factors recognised by the WA government that have made it essential to protect WA’s forests, such as the impacts of climate change, the importance of maintaining biodiversity and forest health, the need for carbon capture and storage, and declining timber yields, apply equally to high conservation value forests still subject to logging across Australia,” she said.

Young repeated calls for the Victorian government to bring forward its timeline to phase out native forest logging, in part due to the damage caused by the catastrophic 2019-20 bushfire season.