Western Australia's COVID-19 border set to fall, but don't look for approval to enter the state just yet 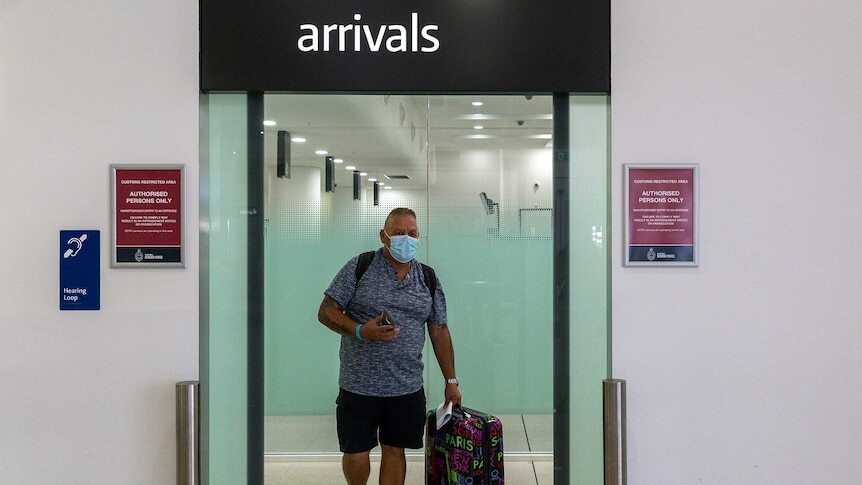 Travellers hoping to lock in plans to head to Western Australia when the state's borders reopen on February 5 are being blocked by the government's approval system.

The G2G pass system has been used throughout the pandemic to allow authorities to pre-approve travellers heading to Western Australia, and is set to remain in service when borders reopen.

However, travellers trying to use the system for trips after that date are reporting that their applications are being automatically knocked back.

Among them is Steffan Nero, who moved to Sydney in mid-2020 for sport and study.

He was keen to return to see family and friends as soon as possible but is not sure when he will be allowed to do that.

Mr Nero's work supporting people with disabilities means he can not take leave at short notice.

He said news that applications are currently being almost instantly rejected is disappointing.

"That adds to the uncertainty and anxiety of it as well," he said.

"Because you're like, 'If I'm going to commit and make all these plans and put on leave and book these flights, and then to still not be allowed' … it's just a very uncertain time."

In a statement, WA Health said the case was "linked to a previous case from interstate".

Seven others linked to interstate and overseas arrivals were reported, and were all in home isolation or hotel quarantine.

The backpacker cluster remains at 21 cases.

About 4,860 West Australians were tested for COVID-19 on Friday, while 13,172 were vaccinated at state-run clinics.

Of West Australians over the age of 12 years, 86 per cent are now double-vaccinated against COVID-19.

The state is ramping up its border restrictions with the Northern Territory from midnight tonight.

From 12:01am on Sunday morning, travellers from the Territory will need to apply for a special exemption through the G2G pass system, be double dosed vaccinated and undertake 14 days self-quarantine and COVID tests.

Acting Premier Roger Cook said the state's Chief Health Officer had recommended the "additional layer of protection" because the NT was "seeing a large spike in cases".

When asked about the issue at a press conference on Friday, Acting Premier Roger Cook confirmed travellers' frustrations.

"At the moment, you can't apply for a G2G pass beyond the 5th of February," he said.

"I suspect that situation will change as we approach the 5th of February.

"But it really depends on the public health advice that exists in the lead-up to early February."

The ABC has approached the government for clarification, including about what health advice might change existing plans.

Under the West Australian government's latest Safe Transition Plan — which was reviewed in mid-December — G2G passes will still be required for domestic arrivals.

The plan also still requires a negative PCR test within 72 hours prior to arrival, and a PCR test on arrival if the trip is for six days or more.

Previously, the state government said PCR testing requirements for interstate arrivals would be relaxed because of pressure on other jurisdictions' testing systems.

In a statement released on Saturday, a spokesperson said the government had to consider what public health and social measures were needed as part of an adjusted Safe Transition Plan in light of Omicron.

"All of WA's settings will be finalised in the lead up to February 5, when we know more about Omicron and have up-to-date health advice," the spokesperson said.

"WA is in the best position because we can watch and learn from the experiences over east and around the world, and ensure when we do transition our border controls, it is done safely and carefully.

"Any measures implemented will be based on expert health advice."

Comments on the government's Facebook page have shed some further light on the situation.

In response to a question about when the G2G site would be updated, a spokesperson confirmed restrictions were set to change on February 5.

"If you wish to travel to WA after this date, please delay submission of your application at this time," the comment read.

"The system is being modified to assess the applications under the new restrictions and will be available soon."

Another comment, which asked whether fully vaccinated travellers would be allowed to enter from high-risk states, was met with a less-certain response.

"WA's Transition Plan measures will be finalised in the lead up to February 5, when we know more about Omicron and have up-to-date health advice," a spokesperson said.