West Ham's Michail Antonio Is Having The Time Of His Life 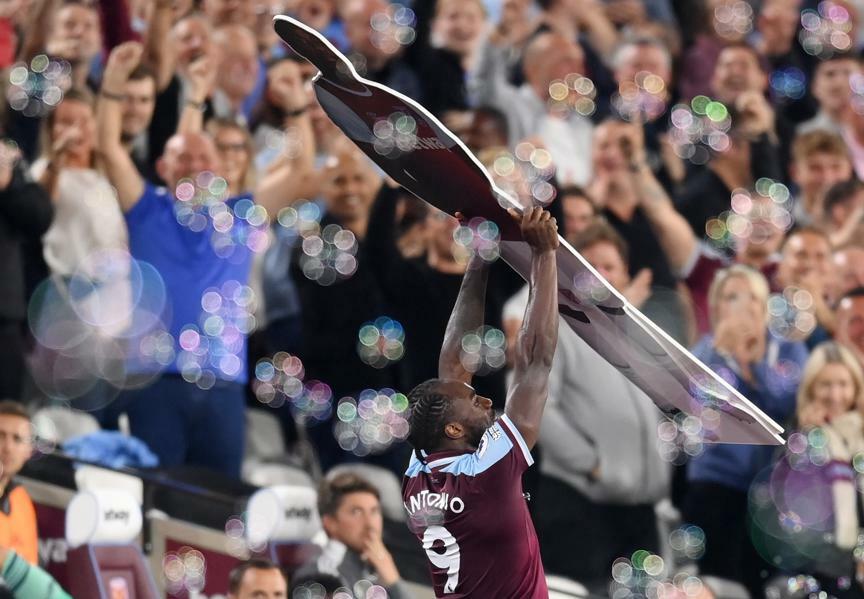 Is Michail Antonio playing better than he ever has?

"I've been on and off with West Ham, I've had some good seasons and some not," he tells me in an interview.

"But for the start of this season, in three games I've got four goals and three assists. I don't think I've ever got those stats in my career so it definitely has to be the best performance so far."

The 31-year-old West Ham United striker has had a month to remember. In West Ham's second match of the season, he starred against Leicester City, creating one goal and scoring two in a 4-1 victory. The first of those goals made him West Ham's all-time leading goalscorer in the Premier League.

He added another in the draw with Crystal Palace, taking his tally for the Hammers to 50 league goals.

"I never really thought about becoming the all-time top goalscorer. Because when I first signed for West Ham, I was just trying to get a game," Antonio, who was named Premier League player of the month and made his international debut for Jamaica this week, says.

"Every time a new manager came in, I always got dropped to the bench and had to work my way back into the team. So it's been a big fight for me. To be able to say I'm the all-time top goalscorer, it's just an amazing feeling."

London-born Antonio, who joined West Ham in 2015, has had an unusual path to the Premier League.

Aged 14, he had a trial with Tottenham Hotspur but his mother insisted he concentrate on his education. Antonio secured a diploma in sport while playing for Tooting & Mitcham United, a club outside English soccer's professional pyramid. He considered applying for university before signing professional terms with Championship club Reading and believes the unconventional journey has been an advantage.

"It's helped me massively. The way I play, people might say I'm not technically the best. They say I'm powerful, I'm strong. But one thing I learned from when I was young is how to help my team win the game. And that's scoring goals and being strong," he says.

While Antonio, who has previously played as a right back and right winger, uses his powerful frame to full effect, there is more to his game than strength. Last year, he scored a stunning overhead kick against Manchester City and his link-up play to set up Pablo Fornals' goal against Crystal Palace showed another side of his abilities.

Off pitch, Antonio has invested in Rezzil, a Manchester-based virtual reality platform for elite sports. The company, which counts Premier League clubs among its clients, offers virtual training and rehabilitation drills for players by "simulating game pressure scenarios".

Rezzil secured $2.7 million for the launch of its consumer platform, Player 22, last month. As well as Antonio, current and former players invested in the company include Thierry Henry, Gary Neville, Vincent Kompany and Tyrone Mings. In a press release, Arsenal legend Henry said Rezzil was "one of the most promising technologies to enter the sport".

Antonio used the VR technology while recovering from a hamstring injury and when teams were unable to train together due to the Covid-19 pandemic.

"It's accessible and easy to set up in your front room and, because it's not too strenuous on the body, you're always able to use it if you're injured or if you're not," he says.

"It's very realistic. If you don't strike the ball properly it won't go into the back of the goal. When you're swinging your foot it actually feels like you're connecting with something.

"If I'm passionate about something I believe in, then I'm more enticed to put my money into it."

Antonio, whose other investments include content organizer Wakelet, is also set to enter the world of NFTs.

After his record-breaking goal against Leicester, he celebrated by holding a cardboard cut-out of himself above his head, a move inspired by a scene from the movie Dirty Dancing. The original plan was for one of Antonio's teammates to lift him, as Patrick Swayze's character does to Jennifer Grey's in the movie.

The National Football Museum in England has asked if it can add the cardboard cut-out to its collection and Antonio also wants to mark the iconic moment. Together with The MailRoom and TRNSMISSION, Antonio is planning to auction an NFT digital image of the cut-out along with a physical second cut-out and his shirt from the match. A percentage of the proceeds will be donated to charity.

On the pitch, his immediate focus is adding to his goals tally. But he is confident enough to already be thinking about how to celebrate the next milestone.

"I always want to better myself. And last season, I finished on 10 goals and five assists. So I definitely want to beat both of those stats this year," he says.

"Hopefully I can just keep the roll going and make sure I keep bettering myself because I missed a lot of years in the Prem(ier League). I got into the Prem at 25 and I started really playing at 26. So I'm hoping I can stretch it out for a bit longer.

"If I get to 100 league goals, I've got something on par with Dirty Dancing."