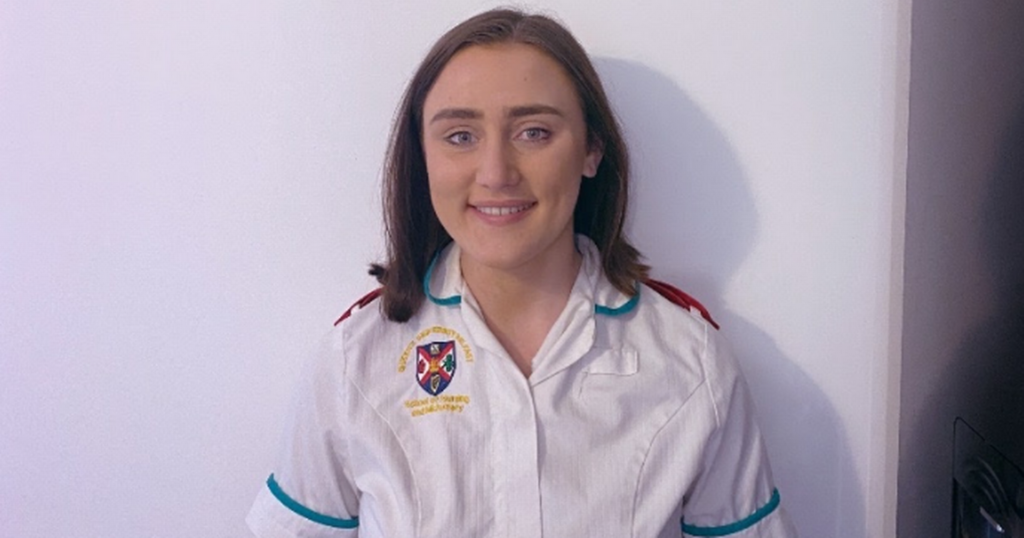 A student nurse from West Belfast has won Nursing Student of the Year at the RCN Nursing Awards.

Mairead Ryan, from the Clonard Street area, won the prestigious award on October 12 for her work to improve young people's mental health in Northern Ireland and internationally.

The recent graduate from the mental health nursing course at Queen's University was part of the team helping to establish the youth-led campaign, MyStoryYourStory, after her personal experience of living with a panic disorder.

The Belfast-based campaign successfully lobbied for a mental health champion in Northern Ireland and more well-being support throughout schools.

"My mum was diagnosed with breast cancer and my granny, who was my second mum, died – all in a short space of time. But cognitive behavioural therapy changed my life and I found my purpose.

"Coming from a low socio-economic area, I knew that the problems I had faced were not unique to me.

"MyStoryYourStory empowers those with mental health issues to tell their stories to help others, providing a platform for young people on the fringes of society to express their views about their input and care from mental health services.

"It offers young people a purpose, increasing self-esteem and enabling them to develop and not let their adversities define them."

Speaking to Belfast Live Mairead added it was "such a shock" to win the UK-wide accolade.

She said: "Everyone in my category was amazing and I think this win has shown me that my passion to contribute to a better mental health system made a difference.

"As a young girl from West Belfast, a deprived area, this has shown me you are more than the labels society gives you - pursue your dreams."

Four other nurses from Northern Ireland won awards at the RCN Nursing Awards including Nicola Bailey, who won the UK's top nursing accolade – the RCN Nurse of the Year.

Nicola is a sexual health lead nurse from the Belfast Health and Social Care Trust and she transformed her service to enable women in Belfast to access early medical abortions.

The service Ms Bailey provided was set up within days after lockdown limited women's ability to travel to England.

She achieved this despite political opposition and protests outside her clinic and while slashing waiting times for contraception and dealing with the pressures of the pandemic.

Saying she was "delighted and honoured" to win the award, Ms Bailey added: "I don’t feel I’ve done anything outside my role as a nurse – to put my patients at the heart of everything I do, use my Code as my guide and provide healthcare to women that need it, whatever it may be.

"This is amazing for me but also amazing for women’s sexual and reproductive health care in Northern Ireland.

"At our clinic we see women who are victims of rape and domestic violence, as well as women whose contraception has failed.

"We support vulnerable women who are repeatedly experiencing their children being removed from their care and help them with contraception so they can stop the cycle and end the trauma of losing their children."

Noel McDonald, who recently retired from the Belfast Health and Social Care Trust, was honoured with a Special Recognition Award for his commitment and leadership.

After working in a police station and the prison service, Mr McDonald led the development of Northern Ireland's first inpatient mental health service, the Shannon Clinic.

The NISTAR nurse-led transfer team were announced as the winners of the Child Health award.

The team, based in Belfast, transport sick children within Northern Ireland and to Dublin for treatment. It is the first nurse-led transport service in the UK and has transferred hundreds of children since January 2020.

As it was ready to launch, the UK went into lockdown, but this didn't stop the team from developing patient information leaflets, and collaborating with a registrar to make a video for children to explain the service.

A record number of nominations were received for nurse practitioner, Paul Murray, to receive a Patient's Choice Award.

Sadly Paul, who worked at Causeway Hospital, Coleraine, died after a cardiac arrest in February after nursing for 25 years.

The nominations for the much-loved nurse include times he went above and beyond to support people with cancer, and ensure they spent as much time as possible with their families.

In one case, he was able to get a helicopter to take a man at the end of life to Scotland so he could die at home with his family.

William Millar recalls how when he was not in a good place and ended up in hospital for two weeks, Paul paid for and brought him his newspaper every day.

"He did everything on his wards," William said.

"He was the glue that brought everyone together. He had the phone in one hand talking to another hospital to sort out a bed for a patient and with the other hand he was taking off bed sheets in preparation for a new patient. A regular thing I heard was 'Better ask Paul Murray – he’ll know what to do.'"