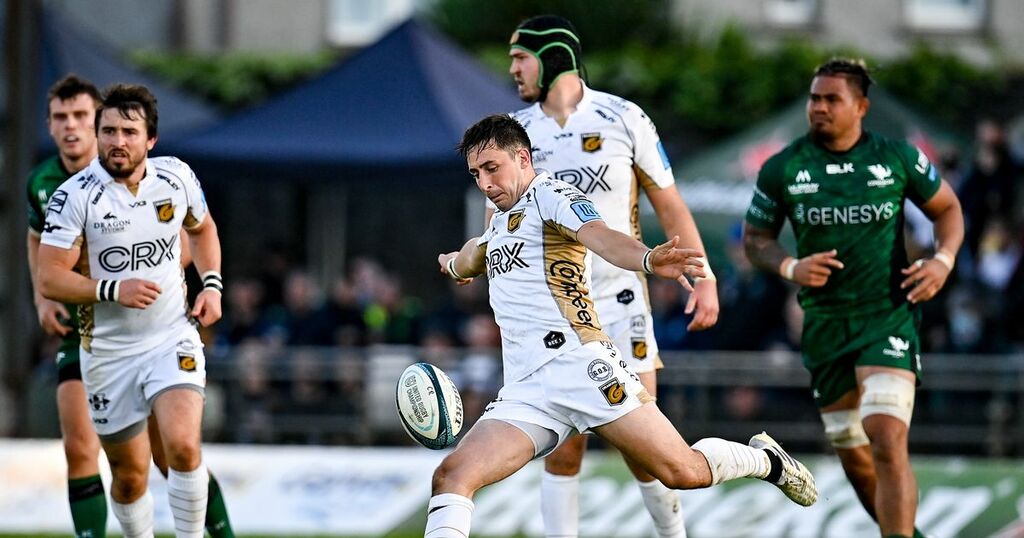 But let’s hope there are plenty of optimists at the Ospreys, Scarlets and Cardiff.

All three Welsh regions suffered sobering defeats in the United Rugby Championship, each hugely deflating in its own way.

It was a different story for the Dragons.

They turned on the style to beat Connacht in Galway.

Maybe it was the best performance by a Welsh region this season.

Whatever, MARK ORDERS picks out the weekend’s winners and losers.

“We are back,” said Dragons chairman David Buttress on social media after the east Wales region’s sparkling 35-22 win over Connacht in Galway.

Maybe a bit more evidence is needed on that front for everyone to agree, with one win indicating only so much.

But, still, the Rodney Parade side were outstanding at The Sportsground.

They were up against dangerous opponents who had beaten the Bulls the previous weekend, but the visitors stamped their authority on proceedings to run out four-tries-to-two victors,

What was most impressive was how clinical they were.

With the immense Taine Basham leading the way, they won the physical battle but they also played with skill and panache and took the chances that were on offer.

It was one of the region’s finest team displays and an effort that augurs particularly well.

Dean Ryan being Dean Ryan, he’ll be reminding his players of the importance of backing up the result and performance. His players have shown their potential; the next step is to achieve consistency.

But all concerned deserved to enjoy Saturday.

It was a hugely encouraging step in the right direction.

“Sam needs to step up in these big games now,” said Sean Holley on Premier Sports after the Dragons won on in the west of Ireland.

“He’s 28 years old and has been around a long, long time.

“But he did step up today.

“He showed composure, defended well, kicked really well, including goal-kicking when it was needed.

“He showed leadership and that’s what you want from your 10.”

Holley was bang on the money.

If the likes of Basham, Aaron Wainwright, Will Rowlands, Elliot Dee and Mesake Doge put in the spadework up front, the Dragons still needed a general behind and they had one in Davies.

He achieved a 50:22 from which the Dragons scored a try; he set up another score with a lovely manufactured dink through; he made 14 tackles, without a single miss.

The Wales international ran the game beautifully, and while he didn’t make any breaks himself, he showed creativity.

Holley’s fellow Premier Sports pundit, former Ireland international Mike McCarthy, also paid the Dragons’ fly-half a generous tribute, saying: “He pulled the strings and put them in the right areas of the field.

“The last game we covered, the Leinster-Zebre game, it (Davies’s display) was similar to Johnny Sexton.

“He put them in the right area of the field. That’s the main thing.

“When you’re a front-five forward or anyone in the pack, when you see you are being put to the other end of the field, it gives you a big lift, a burst of energy and excites you.

“Some of the X-factor he showed and some of the skills were absolutely incredible.”

Despite Wales potentially missing four fly-halves for their game with New Zealand a fortnight on Saturday, few have mentioned Davies as an option for Wayne Pivac.

But his was the best performance by a Welsh 10 by some distance over the weekend.

He also played well against the Ospreys on the opening weekend of the season.

If he isn’t on Pivac’s radar, he should be.

Jordan Williams and Jonah Holmes really deserve separate sections in this piece, but the pair dovetailed so well perhaps we can get away with lauding them in the same bit.

Williams was at his very best for the Dragons.

The best part of eight years ago, a figure involved in age-grade development told this writer of the then youngster: “If he doesn’t come through, we may as well all leave it there.”

He came through to the extent that he made a Wales squad but there has never been a senior cap for a player who is one of the most naturally gifted runners around.

Against Connacht, he set up a try for Holmes by collecting his own kick ahead, drawing his man and sending out a pass. He then scored himself with a break finished off by a sumptuous trademark jink.

His performance showed rugby doesn’t have to be all about bashing into people. It is permissible to try to go around them every now and then.

Holmes himself had a fine game, running hard and taking his two tries well.

He’ll be there or thereabouts for a Wales place against New Zealand.

What can we say?

If there was an award for the most in-form Welsh rugby player, Jasmine Joyce would come close to winning it.

Fresh from her exploits in helping Team GB win the Canada Sevens, she scored a dazzling solo try to help Bristol Bears Women extend their winning run with a 24-5 win over Harlequins.

Joyce was 26 on Saturday and the score was the perfect way to celebrate.

"I love playing rugby, so what better way to spend your birthday?” she said later.

There were seven Wales internationals in the Bristol side.

He’s the fly-half who won a cap off the bench for Wales on their north American tour in 2005 and later suffered a serious knee injury which checked his progress.

But he had a lot of talent which perhaps wasn’t always fully recognised by many of those who counted.

For Bridgend on Saturday, he was at the heart of all that was good about a team performance that yielded an excellent 25-19 away win over Llandovery. One observer said it was the Ravens’ “best-ever” display at Church Bank.

Jones prompted and controlled and knocked over his goal-kicks, reminding watchers that he still has no shortage of class.

Two tries on his return to rugby after the Lions tour.

The first of Welsh rugby’s professional sides to perform below their best this weekend.

Where do you start?

Their set-piece platform was unconvincing, they were comprehensively outplayed at half-back by Ruan Pienaar and Boeta Chamberlain, their midfield was one-dimensional and when they did threaten the opposition line Rhys Webb threw out a pass that was intercepted.

With a rickety platform, Gareth Anscombe found it hard to inspire them and a try resulted when Webb failed to kill an attack after dashing out of the line.

Despite making lots of ground, full-back Dan Evans wouldn't have been completely happy with his effort, either.

From somewhere the Ospreys need to find some creativity.

One of their few players to provide a spark, Mat Protheroe, left the field with 22 minutes to play, apparently because he started cramping up.

He made mistakes on the night, but as the great Carwyn James used to say: “Adventure and error go together.”

Ahead 16-3 at half-time against the Bulls, Cardiff looked set fair at the Arms Park.

But they lost the physical battle completely after the break.

They were bullied in contact and vulnerable in defence, no better illustrated than when Bismarck du Plessis bludgeoned his way forward, on one occasion dragging three opponents with him. He repeated the trick at the other end of the field, too.

But maybe the abiding memory of the game is a South African player tapping Seb Davies on the floor and having a word — we can surmise, judging from the Wales international’s reaction, that there may have been a dot of sarcasm involved — after the Cardiff player had failed to stop Elrigh Louw from a short-range tapped penalty, with Lous bashing straight through the lock. It was a tough evening for Davies, who was also yellow carded.

Then there was young James Ratti heading over the halfway line on a ball-carry, only to be driven back into his own half by brutally uncompromising defence.

Will Boyde, Rhys Carre and Lloyd Williams were among the home team’s better performers, but there were not many other positives.

They won’t meet many teams as powerful up front as the Bulls.

But Cardiff’s soft underbelly was exposed and psychologically the manner of defeat could prove damaging.

Welsh rugby’s miserable triptych was completed when the Scarlets were made to look second rate by a second-string Munster.

The visitors were dominant in all areas and the Scarlets missed too many tackles.

Steff Evans saw three defenders evade him and, uncharacteristically, so did Sione Kalamafoni.

The Scarlets’ lineout was unreliable, they couldn’t cope with Chris Cloete at the breakdown and on a bright, sunny afternoon just one of their backs, Sam Costelow, made a clean break. Munster won the forward battle hands down and despite conceding 15 penalties the visitors scored six tries.

Dwayne Peel needs to bolster his pack, but in mid-season such a trick is hard — ridiculously hard — to pull off.

What a weekend, then, for Scarlets, Cardiff and Ospreys, and not in a good way.