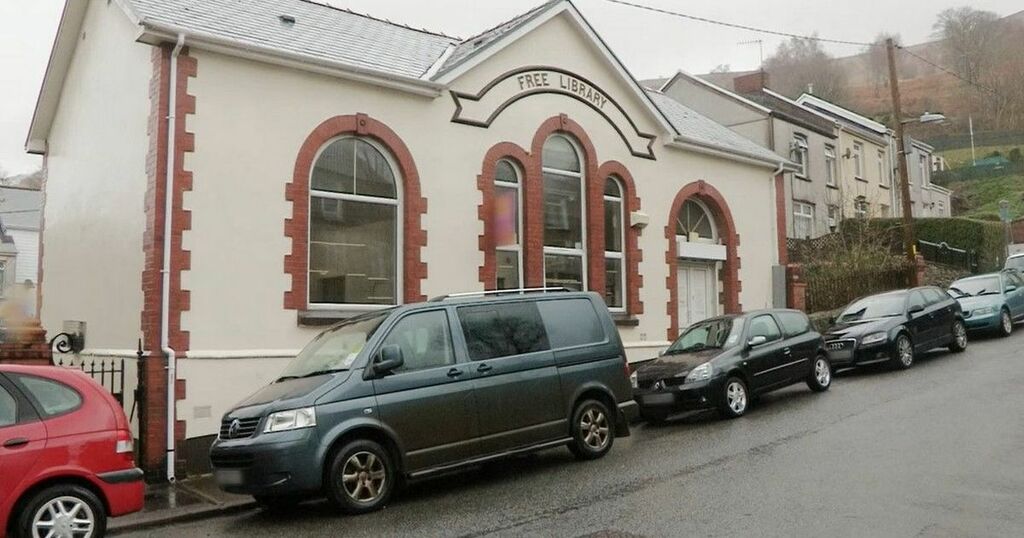 When Homes Under The Hammer presenter Martin Roberts visited a disused valleys library in 2014, he couldn't help but be enthralled by it, despite the damp and the electricity sub-station in the corner of the plot's land.

But, seven years later and the near 120-year-old building near Merthyr Tydfil is still not finished making it one of the show's longest renovations.

Three babies and creating an extra level to the building have been the reason why owners Johnny and Louise have taken the best part of a decade to get moving on this reno project.

Thought to have been built around 1902 and funded by the local mining community, the former library in the village of Troedyrhiw had long seen the books go out on permanent loan, with its most recent history seeing it being used for storage.

Martin was very taken by the potential of the building and the plot back in 2014, a roughly square area of about 0.12 of an acre on a residential street and the detached building that from the street at least looked very appealing.

READ MORE: Cottage in Wales’ best place to live hiding an indoor swimming pool and a bar in the garden

He wasn't keen on the damp inside or the ugly electricity substation outside though.

But the potential to create flats or a large family home at the current property and maybe even selling off a portion of the garden as a building plot had Martin's property imagination whirring.

Once inside, the views from the big windows with the big mountain views were noted, had Martin gushing.

He loved the potential to relieve the property of its false ceiling had Martin gushing about what a potential house could look like once the space was opened up to reveal its double-height to the roof rafters.

But of course, nothing would be possible without change of use for residential or commercial purposes and planning permission for any changes.

The former library went to auction with a guide price of £40,000 and was secured by local couple Johnny and Louise for £52,000, with a squeal of delight and sealed with a kiss - between each other, not with auctioneer Paul Fosh.

But that might have changed to screams of anguish if they knew what was ahead of them.

They met Martin at the property where student Johnny revealed he hadn't even seen the building until that day. If love means trust, then Johnny totally loved Louise as she was the only one who had actually visited the auction property, although she did

What did Johnny think now he was standing in the library? Much smaller than he had envisioned; oh dear.

But the excitement of the impending renovation project from the couple was obvious, and they couldn't wait to get started, with landscape gardener Louise wanting to do the majority of the work herself as Johnny continued his studies.

Luckily Martin reminded them that gas and electricity needs experts to install and sign-off.

And off Martin went into the Welsh valleys sunset.

So, seven years, plus three babies later, and the couple are literally only just putting up internal walls within the library that currently looks like a mini building site.

So since Martin visited in 2014 what has been the hold-up, apart from the three children of course which is likely to slow any couple down somewhat?

Surprisingly it wasn't major planning issues, more like the library throwing up a major problem - it was never designed to be a two-storey building, so in its initial configuration, a new first floor could not be added.

Time to abandon ship for this couple who Johnny describes as 'naïve?' Well, they'd come this far so it was time to get digging.

The excitement seems to have seeped into quiet resignation at this renovation project, but has Johnny got any regrets?

He tells the show, "Can I say buying it in the first place?!

"It's fine, it's good, I'm glad we did it. Life would have been easier had we not bought it. I think we went into it pretty naively, thinking that we could do more of it ourselves than we could at the time, and how much it would cost to do; I think that's probably the biggest mistake".

Help with your next hunt for a home here:

But take a step back and the couple at the end of one of the longest Homes Under The Hammer renovations on the show will have a unique and characterful three-bed house, with double-height lounge diner, with an open-plan kitchen and bonus reception room tucked under the new and troublesome first floor.

And as they are both now experienced landscape gardeners, when they get to the outside space there's no doubt it will be stunning.

Johnny estimates that once finished they would have spent around £60,000 bringing their total spend to £112,000.

The estate agent is smitten with the building - it seems to have that effect on everyone - and estimates the final value to be between £165k - £175k, offering the couple a potential profit before fees and tax of £52k - £62k.

So maybe it was worth the wait.

Homes Under The Hammer is on BBC 1 every weekday usually from 10am, but currently from 11.15am, with selected episodes also on BBC iPlayer. The episode that contained this story is currently available to view and is series 24 episode 34.

To get the latest property newsletters from around the UK, click here