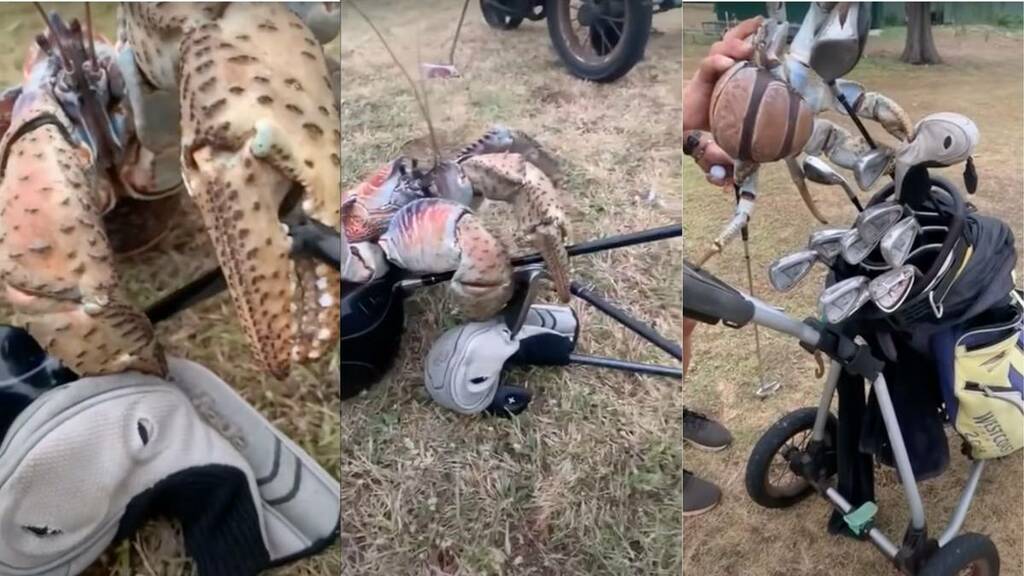 Australia is famous around the world for many things but their deadly and dangerous wildlife is right up there on the list.

On Christmas Island, an Australian territory in the Indian Ocean, it's no different. Especially when it comes to their aggressive coconut crabs.

Unlike your typical baby beach crabs, this species (also called robber crabs) is a gigantic type of hermit crab with a leg span of almost one metre.

They aren't just big either, according to the Natural History Museum of London, these creatures can "lift objects the weight of a 10-year-old child" and can climb trees, eat birds and, of course, coconuts.

As one golfer learned, they can also become quite attached to a set of golf clubs.

During a round of golf, Christmas Island local Paul Buhner captured a video of one of the crabs perched on top of his friends' stand bag.

After leaving the bags to putt, the group returned to find the gate crasher who can become quite attached to a set of clubs; holding on tight with its massive pincers.

Considering the fact that coconut crabs' pincers can crack open a coconut, a golf club or human hand would stand no chance.

Sure enough, after delicately picking up the crab from behind, the friend gently removed two of the clubs from its grasp, but the third was clutched tight and snapped by his pincers "like a chainsaw."

Typically nocturnal, the Western Australian Museum explained that the Christmas Island inhabitants seemed to be "active during the day (when humidity levels are high) and congregate to feed, generally under fruit trees."

Or, as it appears, golf clubs.