Week 5 Preview: The Browns Will Probably Win the Super Bowl So Let’s Learn to Live With It 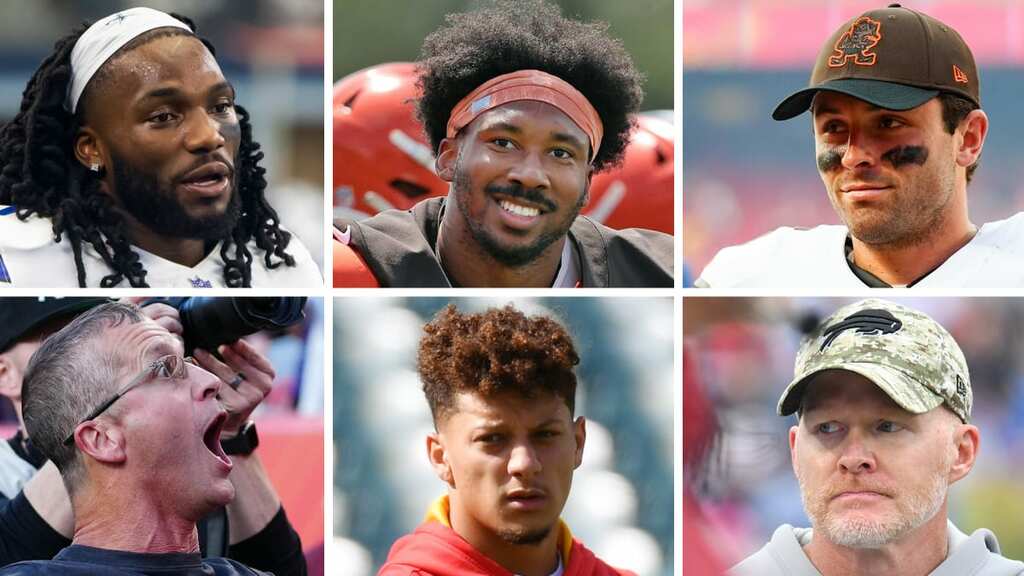 1a. It can be easy to forget about Baker Mayfield. For instance, this one time I was watching a commercial and he wasn’t even in it. But four weeks into the season, few seem to have noticed that Mayfield has taken a small step back since his strong finish to 2020. That’s because Cleveland’s front four is taking over in a way that few position groups do, and this team is very much capable of winning games 2019 49ers-style, but more on that in a second. Or, if you don't want to wait, you can just skip down to it because it's already written.

In short: Mayfield can regress so sharply that he becomes Garoppolo 2.0, and this team is still set up to become 1A to the Chiefs’ 1 in the AFC. But if Mayfield can find his groove like he did in the second half of last season, Cleveland has a chance to pair a league-best defense with a top-10 offense, and be every bit the team that the Chiefs (who they outplayed head-to-head in Week 1) are.

The good news regarding Mayfield: It’s difficult to find any glaring red flags in his play right now—he’s been a touch inaccurate, you can tell he missed Jarvis Landry last week, he isn’t yet on the same page with Odell Beckham Jr., and his protection was pretty meh in Weeks 3 and 4. (Though that was against two really good pass rushes in Chicago and Minnesota.)

There are some weird statistical anomalies—or what seem like anomalies at the moment. For the second straight season (so, since Kevin Stefanski arrived) Cleveland is better on third-and-long (7-plus yards to go) than third-and-medium (4 to 6 yards). Last year, they converted 31.7% of their third-and-longs including 35.5% when throwing, against 29.2%/27.8% on third-and-medium. This year, it’s 41.2%/34.1% on third-and-long, and just 22.2%/14.3% on third-and-medium. I don’t know why that’s a thing—Mayfield, like other short-ish quarterbacks—seems more comfortable working late into the down and attacking larger throwing windows downfield than tight windows at the short-intermediate levels where he also has to navigate throwing lanes at the line of scrimmage. But the numbers wouldn’t be that skewed without some fluke baked in.

It was also a bummer that he couldn’t put points on the board late in the opener at Kansas City, and that he was a bit rocky in the second half of a tight game in Minnesota last week, but those are awfully small sample sizes. The most likely scenario: Mayfield gradually returns to late-2020 levels and the Browns look like world-beaters going into January. Mayfield will find himself in a scenario where he needs to put together a late drive, and like most quarterbacks he’ll have less than a 50/50 shot at succeeding. But regardless, we’ll all take that infinitesimal sample size and launch 100,000 takes based on the outcome.

1b. As for that Browns defense, I thought Cleveland would need at least half a season for that back-seven to meld, especially with the linebackers being so young. However, the front four has been so dominant that is hasn’t mattered. We have seen glimpses of what Jadeveon Clowney can be over the years, and what he once again looks like in Cleveland. DT Malik Jackson and edge Takk McKinley, picked off the scrap heap, have emerged as reliable vets. Malik McDowell, a no-doubt talent and 2017 second-round pick of Seattle whose debut was delayed until this season due to a litany of off-field issues and suspensions, is suddenly a rock in the middle of that line. But the emergence of this group is largely due to the singularly dominant play of Myles Garrett.

It once again calls to mind the stubbornness of the “coverage vs. pass rush” debate. Your pass rush makes your coverage better. And vice versa, but the defensive backfield is a reactionary spot. Along with being heavily reliant on chemistry, reactionary position groups are often only as good as its weakest link, making it a much more challenging spot to address from a roster-building standpoint. However, one player can have an enormous impact in the pass rush, regardless of what his teammates do. And, in Garrett’s case, the need to send any and all help in his direction allows the rest of the unit to work one-on-one. The result right now is the most dominant defensive line in football, and one capable of leading the way in a deep playoff run.

1c. No one has ever been more photogenic than Myles Garrett was at the moment this photo was snapped:

Upon discovering this shot I immediately printed multiple copies and glued it atop all my framed wedding photos. Right on the outside of the glass. There wasn't time to open the frames.

2. Of the two big-name veteran defensive players who switched teams this week, it’s much easier to be optimistic about Stephon Gilmore landing with the Panthers. I’m not sure exactly how much is left in the tank for a 31-year-old cornerback, but he was still playing at a high level between injuries a year ago, and all indications are that his quad injury is healed and it’s just a matter of working into football shape before he’s ready to contribute. And while I think the mentorship aspect of these moves are often overrated, the Panthers have to like the fact that Gilmore, being who he is and playing where he’s played, will be a positive influence on guys like Jaycee Horn, C.J. Henderson and Donte Jackson.

Jaylon Smith to the Packers has a much wider range of potential outcomes. The Packers are thin at linebacker. They’re also thin on the edge, with Za’Darius Smith out indefinitely, and that spot might be more troubling with top cornerback Jaire Alexander also out—the secondary will need some help in the form of a high-end pass rush.

Jaylon Smith’s highlight reel in Dallas was impressive, but his lowlight reel was just as robust, as he often struggled to read plays and find the ball. It’s difficult to trust such an uneven player at a position that is largely reactionary, especially after watching that uneven play across three different coordinators.

Matt LaFleur was on Notre Dame’s staff during Smith’s final season in South Bend—better known as the year Jaylon Smith sacrificed his leg to the gods of the BattleFrog Fiesta Bowl (as noble a cause as there could be). One thing Smith did that season that he didn’t do a ton of in Dallas was rush the passer; pre-injury, he could just have easily been projected as an outstanding edge-rushing prospect. First-year Packers defensive coordinator Joe Barry has Preston Smith and Rashan Gary as his primary edge players, with Jonathan Garvin and Chauncey Rivers rotating in. Oren Burks played some edge for Mike Pettine, but has been primarily playing off the ball primarily in passing situations. They could use some help in the form of a rotational edge rusher.

Changing roles isn’t easy for a struggling player like Smith, but neither is adjusting to a new defense. Maybe Smith finds himself the same way stack linebacker De’Vondre Campbell has in this defense. Or maybe it’s an opportunity to move him to the edge, encourage him to play fast and see what happens.

3. For Sean McDermott, Leslie Frazier and the Bills’ defensive brain trust, watching the way in which the Chargers beat the Chiefs in Week 3 must’ve been funny. Not ha-ha funny, but funny like when Robot Chicken comes on Adult Swim and there aren’t any jokes just a lot of 80s pop culture references so you don’t laugh but you do remember things.

Two weeks ago in their win over the Chiefs, the Chargers put two safeties deep and basically invited the Chiefs to run the ball. The result was 186 rushing yards on 30 attempts (a 6.2 average) for K.C., but the game stayed within reach. The Chargers pulled off the upset thanks to four takeaways and the ability to make a few plays offensively late.

When Buffalo hosted the Chiefs on a Monday afternoon last October, they used a similar approach—two safeties with their heels on the West Seneca town line, allowing K.C. to rush for 245 on 46(!) rushing attempts. The Bills were, loosely, there in the end, trailing by six midway through the fourth quarter and needing a stop, but they couldn’t get that stop, and only took the ball away once (at the end of the first half, resulting in only a long missed field goal) all game. In the rematch in the AFC title game, Buffalo got a little more aggressive, picking their spots to come after Mahomes, but too often failed to get him on the ground and then watched as Mahomes metaphorically ate their souls, which is what he usually does when opponents blitz him.

The Bills have dominated some really bad offenses this season, and they figure to back off the blitz again in this one. K.C.’s young O-line is still a work in progress, and Buffalo can theoretically get some pressure on Mahomes with a four-man rush. Their path to victory will depend on getting Mahomes on the ground and/or taking the ball away. If those things don't happen, their only hope is Josh Allen going shot for shot with Mahomes.

4a. It's nice that the Ravens are set to break the consecutive 100-yard rushing game record in front of their home crowd—it’s always awkward when you bring the pomp and circumstance that comes with honoring such a hallowed achievement in another team’s stadium. The only real downside is that, because the game will be played Monday night, the Baltimore school system won’t know whether or not they’re canceling Tuesday’s classes in honor of the moment until late into the night. (Though maybe they’ll cancel either way, since falling short of the record will spark a day of mourning.)

4b. If John Harbaugh really wanted to finish off his thorough trolling of Vic Fangio, he’d line his team up for the final snap of the game and have Lamar Jackson run straight backwards until the record is unbroken. So, for instance, if Baltimore is in a victory formation at their own 20 with three seconds left and have 112 rushing yards on the night, have Jackson run backward 13 yards then take a knee.

4c. We had some fun on the mid-week podcast with Harbaugh and Fangio and the Family Feud theme song. At least I did. You might not have. If so, sorry about that.