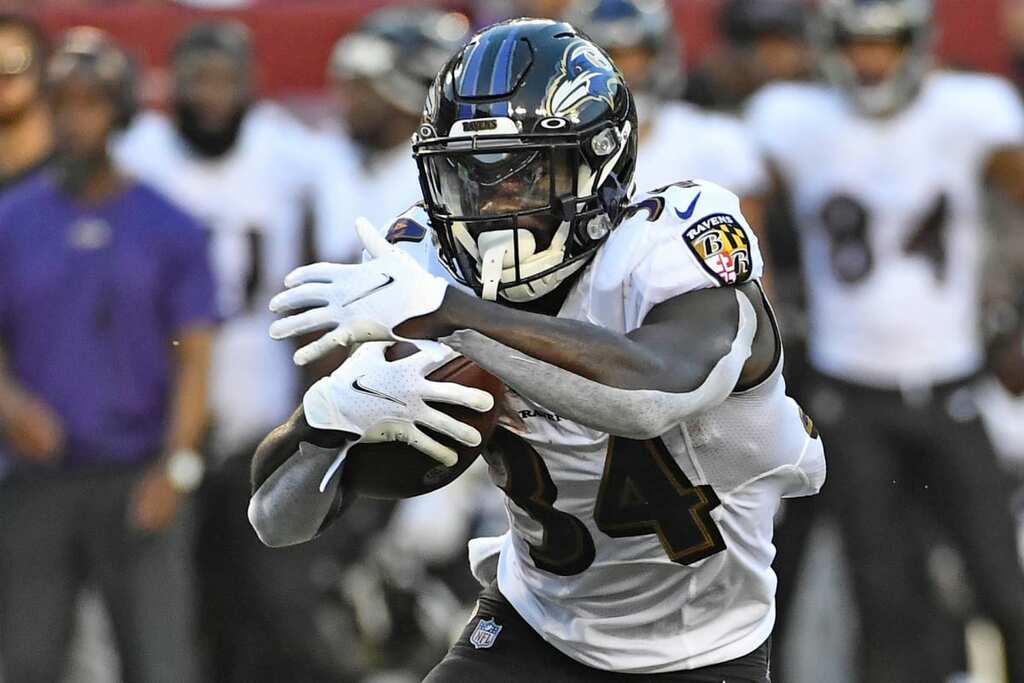 Fantasy football is all about volume. Sure, the DeSean Jackson type who takes two catches for two touchdowns and 100 yards will win you some weeks, but you might never have the confidence (or desperation) it takes to plug him into your starting lineup. Betting on volume is safe — volume and efficiency are what I will be focusing on each week in Turn Up The Volume.

Every Wednesday, I’ll be looking at a few players whose volume was high but didn’t do much, or as much as they could have, with their opportunities as well as players who made the most of limited volume.

Can you say workhorse? Harris' 16 carries for 45 yards was not at all encouraging, but one stat stands out from Sunday: He played 100% of the Steelers' snaps. If that continues, or anything close to it, he can remain inefficient and still put up better numbers than he did against the Bills. But I bet he stays on the field for the vast majority of Pittsburgh's stats and capitalizes on his touches. His 2.81 yards per carry will improve, and Harris figures to be more involved in the passing game—he caught one of three targets against Buffalo.

Expect Harris to see similar or increased volume going forward, especially in games the Steelers are winning (they trailed for the first three quarters). His yardage totals and likelihood of scoring will both increase with upcoming bouts against the Raiders and Bengals.

The usage was there for Conner against the Titans. He did not take advantage. Arizona’s offseason addition had the most carries (16) on the team in a runaway victory, but he managed just 53 yards. Chase Edmonds was on the field more often (38 snaps to 35), had more rushing yards (63) on fewer carries (12) and is the superior receiving threat. The hope with Conner is that he runs for about 50-60 yards and falls into the end zone.

Conner owners can only hope his volume stays about where it was on Sunday, but chances are it goes down. The Cardinals game script will not always lead to 33 rushing attempts in NFC West shootouts. Without a receiving floor, week-to-week production may be hard to come by for Conner.

Chark probably doesn't even belong on this list because he finished with a good fantasy outing, but he left even more on the table! He led the Jaguars in targets (12) in a game where Trevor Lawrence heaved the ball 51 times. Chark only hauled in three of those to finish with 86 yards and a score. He was second in the NFL in air yards behind only Tyreek Hill and second among Jacksonville receivers in snap count.

Chark was efficient with the passes he did catch (28.7 yards per), but that isn't sustainable. Neither is expecting a score every week. But with the sheer volume he's due, his overall efficiency will improve — as long as he catches better than 25% of the passes thrown his way.

Pitts had a pedestrian start to his career in a blowout loss. Atlanta was kept out of the end zone, and Matt Ryan had his lowest yardage total since October 2019. As such, Pitts caught four passes for just 31 yards. Still, he tied Calvin Ridley for the team lead in targets (8) and out-snapped Hayden Hurst.

Volume-wise, this was a good start for Pitts. His eight targets were tied for third among all tight ends. Hopefully, he can be used vertically the way he was at Florida and in creative ways near the end zone by Arthur Smith in the coming weeks. Yardage and scoring opportunities should come his way.

Jacobs barely out-snapped Kenyan Drake (45-41) against the Ravens, and a poor rushing night was salvaged by a pair of rushing touchdowns from two and 15 yards out. It appears Las Vegas is going to make at least their investment in Drake worthwhile. Drake didn't run the ball well either, but he caught all five of his targets for 59 yards. The game script was not in Jacobs' favor, and he was questionable leading up to the game, but his usage and efficiency (10 carries for 34 yards) are concerning.

Jacobs' carries may increase, but what are they worth behind that offensive line? We got a look Monday night, and it wasn't pretty — sans Marcus Mariota's 31-yard run, the Raiders averaged 2.55 yards per carry. Those touchdowns won't be there every week.

Williams looked great against the Raiders. The only question is, why didn't we see more of him? He finished third on the team in carries behind Lamar Jackson and Latavius Murray, who recently joined the active roster. It's not surprising that Jackson ran more than the rookie, but Murray? There's also the looming threat of LeVeon Bell and DeVonta Freeman.

On 12 touches, Williams nearly topped 100 total yards and found the end zone in his first career game. The efficiency you're looking for was on display (7.2 yards per carry, 9.7 yards per catch). John Harbaugh needs to ride the rookie in favor of the veterans behind him on the depth chart. If he does, expect more big weeks from Williams.

Take away one big play from Jefferson, and he has one catch for 13 yards. But his numbers beyond that 67-yard bomb tell a story of a potential burgeoning flex in one of the best offenses in the league. Jefferson was on the field for 69% of snaps and ran more routes than Robert Woods. He was third on the team in targets behind Cooper Kupp, Tyler Higbee and Woods. He's a great stash who could boom if his volume increases.

The Rams didn’t have to pass much because of how quickly and easily they scored against the Bears. But Jefferson could benefit in high-scoring affairs where Matthew Stafford has to air the ball out more. The most positive takeaway is that Jefferson is the clear No. 3 and deep threat — DeSean Jackson played just 27% of snaps.

Johnson's performance is the epitome of this article's purpose. He played 12 snaps. He caught two touchdowns. So when you go to the waivers and say, "Wow, this guy had 16 points, gotta pick him up," know that efficiency won't be repeated, and there's no reason to think his volume will increase either.

Johnson played the least snaps of the three Saints tight ends and the fewest of all skill position players. Yes, Chris Hogan out-snapped him. It's great for Johnson and Jameis Winston, who had a uber-efficient outing as well, but with no path to increased volume and touchdown efficiency that would put Jimmy Graham to shame, don't buy in too much to this performance.