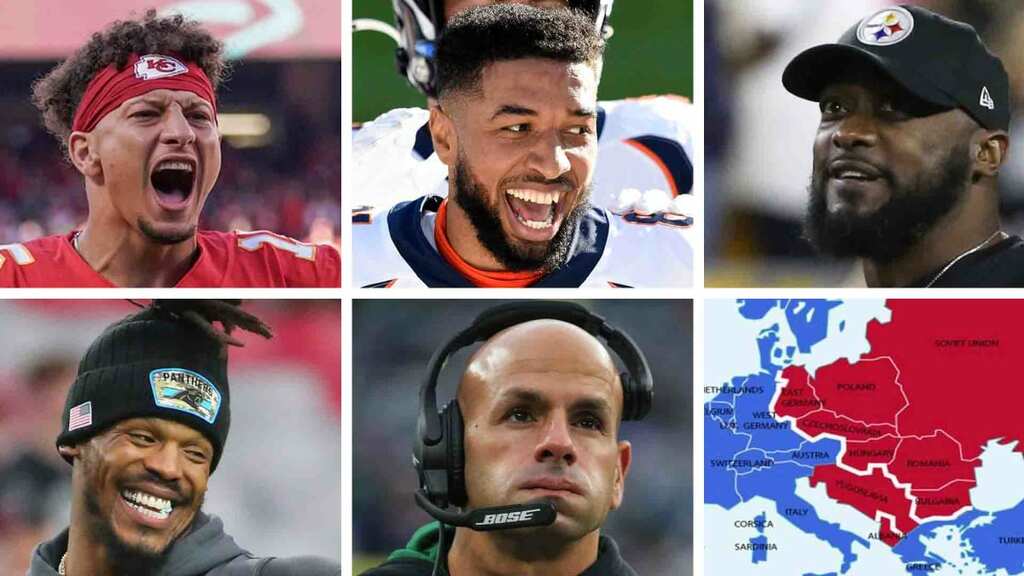 1. The Chiefs-Cowboys game is going to be very good and I think you should watch it. We know how good the Cowboys have been this year and the unnecessary hand-wringing in regards to the Chiefs offense has thankfully subsided.

But, in light of the conversations regarding that Chiefs offense this year, I did want to take a quick moment to look at two throws that came in primetime games last week.

The first is from Sunday night, Patrick Mahomes extending the play and underthrowing a 50/50 ball to a running back matched up against a defensive back. This is the result.

The second is a Matthew Stafford quick-screen on third-and-long, put in the right spot on what was a playcall meant to set up a punt, that resulted in a pick-six, quite literally the biggest swing you can have in an NFL game:

Turnover avoidance has become an obsession for many. You could argue that the evidence put forth in the two plays above—one a high-risk throw that resulted in an offensive touchdown, the other a low-risk throw that resulted in a pick-six—is merely anecdotal. But through Week 10 of the NFL season, games have featured just 2.6 turnovers per game (as in 1.3 per team), tying 2020 for the lowest mark in NFL history. Basically, every turnover is a piece of anecdotal evidence. No one wants their quarterback to make (or, have to make) risky throws, but there’s really not that much risk in risky throws; due to the fact that the receivers are so much better than the back-seven defenders across the league, the vast majority of the time those passes usually end up falling incomplete at worse, with a chance for a catch or a pass interference flag.

So, on Sunday afternoon, the Chiefs will likely take the same tack they did in Vegas. If the Cowboys start with a bunch of split-safety looks, they’ll chip away underneath. If the K.C. defense holds up its end of the bargain and the Chiefs take a lead, at some point Dallas will have to move out of those two-deep looks and then the Chiefs have the option of attacking downfield. It was never a matter of anyone finding Mahomes’s kryptonite, it’s just a matter of managing things within the flow of the game, and the fluky turnovers drying up.

2. T.J. Watt is more valuable to his team than any non-quarterback in football. And with Watt (plus Minkah Fitzpatrick) sidelined, the Steelers will be facing an even steeper climb than they were last time they visited the Chargers in L.A., when Duck Hodges was under center.

Watt is crucial because of the current state of Pittsburgh’s offense, but also because of the defense’s struggles to stop the run. So far this season, it’s been less like the Steel Curtain and more like the Shower Curtain (get it, less like a nod to the metaphorical barrier the Soviet Union erected in order to separate the bloc of Comecon states from Western Europe and more like the vinyl sheet that keeps shower water from getting on your floor). In fact, through Week 10 the Steelers are allowing 4.61 yards per rush, which is on pace for the second-worst mark in franchise history and the worst since before the establishment of both the Iron Curtain and the Steelers nickname (the Pittsburgh Pirates allowed 4.97 yards per carry in 1934).

The culprit has been really poor play from the inside linebackers, which is especially disappointing since they addressed the position this offseason after a rash of injuries left them shorthanded last year. But Devin Bush is not playing anywhere near the level he was pre-ACL injury, and Joe Schobert hasn’t given them much more than that. Throw in the season-long absence of Stephon Tuitt and the Tyson Alualu injury and you have a team that’s in an unfamiliar spot: susceptible in the trenches and up the middle.

3. Be sure to send a mylar balloon to Tim Patrick in recognition of his new contract, which seems like a win-win for both player and team. The Broncos get a reasonable price on a guy who has quietly become a high-end No. 2 receiver, and Patrick—while he’s probably worth a little more than what he got (which was reportedly less than $20 million guaranteed)—gets financial stability in what’s an increasingly oversaturated receiver market.

Patrick has been overlooked for a number of reasons, some of them very familiar: He went undrafted in 2017 and bounced around three different practice squads before breaking through. Denver recently added two high-pedigree receivers (Courtland Sutton and Jerry Jeudy) and a tight end (Noah Fant), all top-40 picks and all added after Patrick arrived in Denver. But Patrick is mostly overlooked because of his common name.

He and Washington defensive lineman Jonathan Allen are the captains of the All-Ordinary Name team, which I made up just now and also currently includes two players. And it underlines the importance of a nickname. Damon Harrison was a very good player for a few seasons, but would anyone have recognized the excellence of the run-stuffing interior lineman if he wasn’t known as “Snacks”? Would the Washington Football Team’s current starting quarterback have been considered for their roster if he wasn’t Taylor “The Taxpayer” Heinicke? (On account of the fact that he not only files his income taxes on time but also frequently, without fail, pays sales taxes on non-exempt items). It’s why a basic service provided by every player agent should be nickname assignment and promotion.

4. I very much like Robert Saleh, and I believe I was literally the world’s last Rex Ryan defender. Thus, it’s probably not a surprise that my take on the Saleh vs. Rex vs. Saleh’s brother feud is pointless since their circumstances when taking over the Jets were completely different and also kinda dumb.

When Ryan took over the Jets, they were in good shape roster-wise and the defense had played a generally similar style under Eric Mangini. Also, he went to two AFC title games with Mark Sanchez at quarterback; in 2010 they won road playoff games over Peyton Manning and Tom Brady. That’s impressive regardless of whether or not the cupboard was well-stocked when he arrived. In Buffalo, he inherited a roster that was both underwhelming and built for a much more simplistic, fast-flowing, see-it hit-it system. It was going to take a complete teardown, and there didn’t seem to be much of an appetite for that.

As for Saleh, his defense is built to get fast players playing fast; in San Francisco he added wrinkles once that foundation was in place. Right now, that foundation is nowhere near in place, as the only position group that’s even at a baseline level of competence is the defensive line. Still, it’s undeniable that this group has been particularly awful in 2021, much worse than any defense should be under a sharp defensive coach. But, certainly, you can’t draw any definitive conclusions about Saleh in New York after 10 games with personnel that is both untalented and ill-fit for what he does.

Join us next week when we’ll delve into the feud between Marty Mornhinweg, Dan Campbell and Dan Campbell’s cat.

5. We’re not going to get vintage Cam Newton in Carolina, but even the 2020 edition is enough to make the Panthers at least a favorite to grab a wild-card spot in the NFC. We know this team has a defense, the issue has been the complete lack of identity on offense this season.

Newton might ultimately be limited in the passing game—he was streaky even in his prime, and there’s no telling what we’ll get after years of shoulder problems and 10 days after joining a new team (which is his old team, but one that has a coaching staff he’s never played under). But being able to lean on an 11-man rushing attack, which also unlocks more out of a relatively fresh Christian McCaffrey, gives them a chance for a league-average offense.

And then, consider what this team has done this year despite the poor play at quarterback. They’re 5–5 and currently the seventh seed in the NFC. And also, check out where they are in this next thing…

6. Back by popular demand—well not “popular,” nor “demand,” but—“back”: Updated “luck”-adjusted point differential rankings through Week 10 (not including the Patriots’ TNF drubbing of the Falcons). You can re-read my thesis in last week’s Football Things Midseason Report, but I don’t have anything to add. Math is still math.