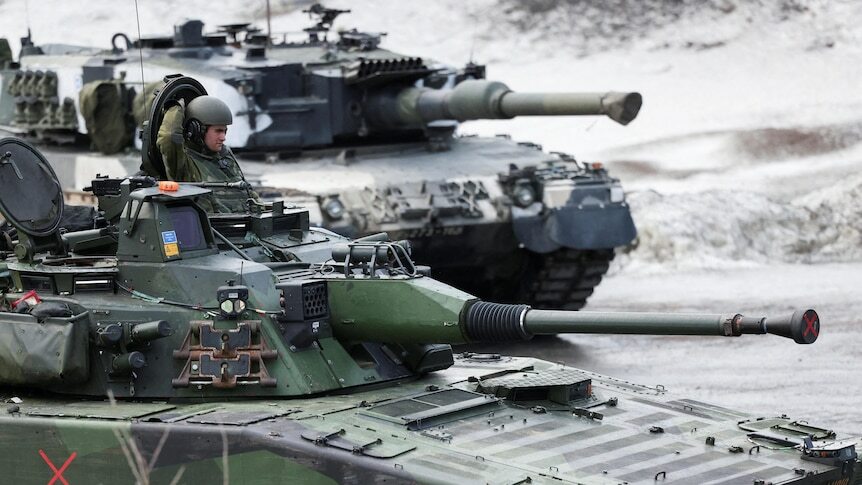 Evening Standard
One subscription that gives you access to news from hundreds of sites
Russian invasion of Donbas and south Ukraine ‘two weeks behind schedule’, says US official

The Guardian - AU
From analysis to good news, read the world’s best news in one place
Albanese’s First Change As PM Was To Add The Aboriginal Torres Strait Islander Flags To Podium

And why wasn't this done earlier????

Pedestrian.tv
The brutality of elections as the new PM takes over - and takes off

Wagatha Christie trial | Rebekah Vardy started to cry in the witness box at the start of questions about some of the abuse she and her family have received in the aftermath of the Wagatha Christie fallout. The court heard trolls had threatened to rape her daughter. She also denied the suggestion it was "standard practice" for her to leak private information to The Sun via her agent. Here's a roundup of today's evidence.

The big story: Britain's pact with Sweden and Finland

British soldiers could be sent to defend Sweden and Finland against a Russian invasion as part of new defence pacts with the two countries, Boris Johnson said today as he vowed to support their applications to join Nato.

The UK promised to support the Swedish and Finnish armies – including with troops if requested – if they should be attacked as Mr Johnson moved to shore up opposition to Vladimir Putin.

Stockholm and Helsinki have given similar assurances to Britain. It comes as the Ukraine war has the look of a stalemate as its third month approaches.

For Putin, that may be enough. US intelligence now believes the Russian president is preparing for a prolonged conflict, one in which the West, squeezed by a cost-of-living crisis, will be the first to waver in its commitment to Ukraine.

However Alex Clark has three charts showing why Putin is wrong to think the cost-of-living crisis is on his side against the West.

Still, pro-Russia collaborators in Kherson, in southern Ukraine, are poised to ask Putin to annex the region in what would be Russia's first official land-grab since the start of the war.

Kirill Stremousov, the Russia-installed deputy head of the Kherson administration, also said that a referendum to secede from Ukraine into a Kherson People's Republic, similar to two pro-Russia rebel regions in Donbas, had been scrapped.

However, Russian troops have been forced to retreat behind their own borders, Kyiv officials said, as Ukraine launched counter-attacks aimed at halting Moscow's main advance in the east.

The Battle of the Donbas is also not going as the Kremlin had hoped.

Mr Johnson's diplomatic visits to Sweden and Finland came as he told his Cabinet ministers to "go faster" as they try to come up with policies to tackle the cost of living crisis hitting Britain.

The Prime Minister convened a committee meeting of senior figures last night to discuss the ways Whitehall departments can alleviate the growing pressure on household finances.

Yet a looming trade war with the European Union threatens to pile further pressure on UK households.

Brussels has warned the UK of serious consequences in retaliation to Liz Truss reportedly planning to announce the UK will move to unilaterally alter parts of the Northern Ireland Protocol.

Louis Ashworth analyses how a trade war with Europe will spark a fresh cost of living crisis.

Michael Gove appeared on BBC Breakfast to rule out an emergency Budget after the Prime Minister suggested Rishi Sunak would be "saying more" about help with the cost-of-living crisis in the coming days.

Yet the Levelling Up Secretary also channelled his inner Liverpudlian during the interview as he put on different accents to impersonate the Treasury and political pundits.

Watch as he shouted the words "calm down!" in a Scouse accent after adopting an American twang as he was asked about Mr Johnson's hint at further financial support.

The outing came shortly after Mr Johnson was ridiculed for his TikTok debut, in which he warned viewers they "won't necessarily catch me dancing on here".

Around the world: Passenger forced to land plane

A passenger with no flying experience safely landed a light aircraft at an airport in Florida after his pilot fell unconscious, in what has been described as "nothing short of a miracle". Remarkable audio from the cockpit showed the man telling air traffic control: "I've got a serious situation here. My pilot has gone incoherent and I have no idea how to fly the airplane." The man, who has not been identified, was a passenger on a Cessna 208 Caravan and was flying home to Florida from the Bahamas to see his pregnant wife. Watch the landing here.

Eye of the swarm: Bee close-up among 13 stunning wildlife photos

The British Wildlife Photography Awards are back after a two-year hiatus, and have released these images to encourage people to enter

See all the images

Roger Federer and Rafael Nadal have been told to "come clean" about what part they played in men's top tennis players calling for Wimbledon to be stripped of ranking points over its ban on Russians and Belarusians entering the tournament. The ATP Player Council on which Federer and Nadal sit has also been accused of undermining the global response to Russia’s invasion of Ukraine. As Manchester City take on Wolves tonight in the race for the Premier League title, Oliver Brown examines how Pep Guardiola's side have become are football's vampire squid.

Airbnb will suggest properties holidaymakers may want to visit instead of asking them to enter a destination as it tackles claims it is contributing to over-tourism. The company has unveiled what it called the biggest change in its history to direct tourists away from hotspots and towards far-flung locations. Brian Chesky, Airbnb's chief executive, said it would "redistribute" tourism and help to prevent throngs of travellers flocking to cities like Paris during peak times. Read how it will work.

Bataclan: The Musical | It was the photograph of a happy-hour sign, covered in blood in the immediate aftermath of the 2015 Paris terror attacks, that did it. "It was so bleak and heart-breaking to see," says Sophie Golby. Now she and her creative partner Tom West, recent graduates of London College of Music, have turned what happened in Paris on November 13 that year into a two-act musical, For You I'd Wait. Read how the show attempts to make joyful theatre out of terror.

Boozy Brits staying away | There has never been a better time to visit Europe's stag-do capital. Will Tizard finds out where all the groups of lads have gone – and why now is the time to book a trip.

Evening Standard
One subscription that gives you access to news from hundreds of sites
Russian invasion of Donbas and south Ukraine ‘two weeks behind schedule’, says US official