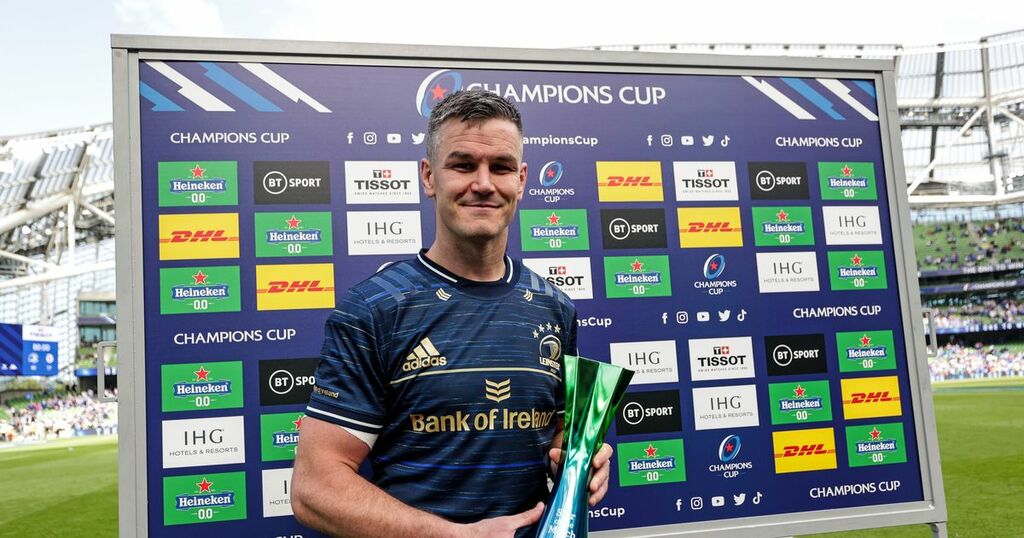 Johnny Sexton: 'I think Munster softened Toulouse up for us a little bit'
Leinster skipper picked up the man of the match award as the Blues cruised into the Heineken Champions Cup final

Johnny Sexton insists Leinster must take their Heineken Champions Cup semi-final victory over Toulouse with "a pinch of salt" after progressing to the decider in Marseille.

Blues talisman Sexton produced a man of the match display in the four-try, 40-17 victory over the reigning champs in front of the 42,076 crowd at the Aviva Stadium.

Leinster are into their sixth final - their first since their only loss in a European decider, to Saracens in 2019 - and will play the winners of today's clash between Ronan O'Gara's La Rochelle and Racing 92 in Lens.

Front row stars Tadhg Furlong (ankle), Rónan Kelleher (head) and James Ryan (shin) are expected to be fit for the final in 13 days time after suffering injuries against the reigning champs.

But Sexton felt that Toulouse had been "softened up" last week by Munster, who took them to extra-time and penalty kicks.

"We did some really good things," said Sexton. "What I was most pleased about was that we didn't let the mistakes faze us and built on last week (at Leicester).

"So we've got to take it with a pinch of salt. This isn't where we wanted to get to - we want to win the final so we've achieved nothing yet.

"We’ve been a champion team before but we all remember the Saracens final, what we could do better.

"We'd love to go back in sport, but you don’t get a chance - now we’ve got another chance.

"I never thought that I’d get another chance so it’s great, and we're all so driven to put a fifth star on the jersey.

"It’s a special environment to be part of."

Leinster supremo Leo Cullen stressed the need to push hard to the end after three years of disappointment since last lifting the trophy against Racing in 2018.

Pointing to last year's semi-final loss to La Rochelle, Cullen said: "We didn’t quite deliver our best performance then.

"At this stage you need to be delivering close to your best against the best teams in Europe.

"It's a hugely exciting challenge away against a French team regardless of who it will be, away down in Marseille. It’s a different environment.

"We were down there in a semi-final. We don't have many players still around from that day - Jonathan (Sexton) wasn't even there, he was (with Racing).

"But there's parts of that day and weekend that still live strong in my memory for lots of the wrong reasons.

"It's been a season of many twists and turns, we always felt like we were scrambling, A, to qualify and, B, to get a seeding because you can see out there the difference it makes when you're playing at home in front of a big crowd."

Johnny Sexton: 'I think Munster softened Toulouse up for us a little bit'
Leinster skipper picked up the man of the match award as the Blues cruised into the Heineken Champions Cup final