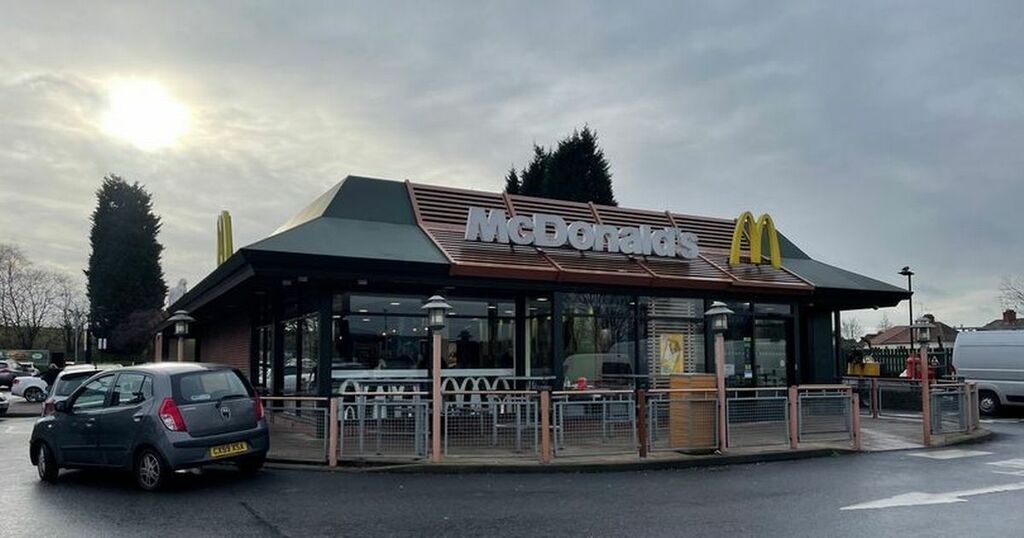 A McDonald's restaurant has been rated one of the worst in the UK, out of 1,300 of the chain's outlets - but just how bad is it?

Despite being known as an iconic fast-food venue around the world, the Midlands eatery has attracted some scathing TripAdvisor reviews.

The restaurant in question is in Kingswinford near Dudley, and Birmingham Live reports it has attracted a meagre rating of just two,

One recent review from five weeks ago was headlined 'Worst McDonald's in the West Midlands, you decide'.

It read: "Only a viable business as its a strong brand! Orders are almost never ever complete, always missing items.

"Food quality poor. Most reviews on this platform and others such as just eat confirm this. Be warned!

"Greggs is only over the road a much better option."

Another review from January 2021 was titled 'Utterly rubbish. Worst McDonald's in the UK'.

It read: "Has to be the worst McDonald’s in the UK!! Look at reviews not just on here but just eat etc!!!"

McDonald's say "reviews referenced make up a tiny proportion of the thousands of customers served each day".

The restaurant has a five rating from the Food Standards Agency and was last inspected in October 2018.

But is it really that bad? BirminghamLive Reporter Dayna Farrington found when she went to see it for herself...

So on first arriving at the McDonald's off Dudley Road, I was surprised at how busy the car park was.

It's not the biggest car park anyway - but there was a fair few delivery drivers parked up too, eventually I nabbed the last spot in the car park.

But as I walked into the restaurant itself, I noticed it was fairly busy for nearly 11.30am on a Tuesday in January. A number of the tables were already taken up by solo diners and a few families.

But on first impressions, it looked clean and tidy - there was no food left on tables. Again, I visited fairly early on in the day - so this may be different later in the afternoon into the evening.

There was no one serving behind the counter when I arrived, only those handing out the orders - so I had to use the self-service screens.

But all in all, I found the restaurant to be clean, tidy and well organised.

I sat down to enjoy my meal and couldn't didn't see any messy tables, or food left lying around.

The only time I saw food left on a table was when a family left - and this still hadn't been cleared away in the 10 to 15 minutes I stayed before I left. And it was still visible from the window as I walked back to the car.

The outside was tidy - no overflowing bins or rubbish dumped.

For first impressions, it didn't seem too bad. I'd definitely seen worse McDonald's in the past.

As mentioned previously, there was no one serving behind the counter when I arrived at the restaurant - so had to use the self-service screens, which was no big issue.

It might be a sign of the new Covid times as you have less interaction with others.

It was quick and easy to use the screens anyway, and within a few minutes I was waiting for my food to arrive.

Having read reviews on TripAdvisor about items being missed from orders and cold food, I wasn't holding out too much hope.

Yet within minutes, my order number was being called and I was being presented with a large tray of food.

Even though it was just me visiting the McDonald's this time, I ordered more than enough food - to put to the test to see if I received every item in my order.

And huge disclaimer here, I did not eat it all. I could not eat all that food.

So I ordered a large quarter pounder meal with fries and an Oasis; a chicken nugget Happy Meal with a bottle of orange juice (this came with a choice of sauce - so I chose ketchup); one apple pie; and a deluxe hot chocolate.

As mentioned previously, when collecting my food I asked for a further two sauces - sweet curry and sweet and sour.

Upon collecting my order, it looked as if everything was there. And it was was - there was nothing missing from my order. So good start so far.

I tried the large chips first which came with the main meal. These were piping hot.

And the box was full, no half portions here. In fact, they were falling out the box onto the tray.

But comparing them with the Happy Meal chips. These were lukewarm and further down the packet, quite cold. So rather disappointing there.

I tried a few, but couldn't eat anymore.

Next I took a few bites out of the Quarter Pounder.

It was well put together, nothing really falling apart - so first impressions looked good. However, it wasn't that warm.

I wouldn't say the burger was cold, however it wasn't nice and warm as you'd expect a burger - which was disappointing.

But it didn't taste bad.

However, the chicken nuggets were warm - so thumbs up from me! They were just as delicious as I remember.

And the apple pie, despite being sat on the tray for a good 20 to 25 minutes while I tried the other food and drink, was piping hot when I got round to it.

From memory, I don't think I have ever had a McDonald's apple pie (despite winning them numerous times on Monopoly) and it was delicious. I will definitely be trying again.

I purposely ordered a deluxe hot chocolate during this visit. I think it's more of a festive drink as it did say on the screen that it is leaving the menu soon.

It is meant to come with whipped cream and a dusting of chocolate over the top.

But, at two previous visits (not at this particular branch) I've ordered this exact drink and it's come A) without cream, B) without chocolate dusting, and C) pretty much half full.

So I was intrigued to see if this would be similar.

But I was pleasantly surprised to find all three boxes had this time been ticked. And it was piping hot.

And it even stayed warm while I was at the restaurant and was perfect drinking temperature for my 20 minute drive home.

It wasn't the nicest hot chocolate I've ever tried - I always find McDonald's hot chocolates hit and miss, sometimes it's like you're drinking hot water, other times they are delicious.

This was ok - the chocolate flavour came through - but it wouldn't rival somewhere like Costa.

And it didn't look as extravagant as the image on the screen, but when do they I suppose?

So I headed to the Kingswinford branch full of fear of what might be in store after reading the overwhelmingly terrible reviews on TripAdvisor.

Would I get my full order? Would the restaurant be messy? Would my food be cold? Would the staff be rude?

Even the most latest reviews from December are very negative.

But, I have to be honest, I was pleasantly surprised.

It was not as bad as the reviews made out. Whether this is based on what time I visited, as mentioned I was there at around 11.30am on a Tuesday in January.

Had I visited after the busy lunchtime rush, in an evening or at a weekend, this could be an entirely different review.

But I found it to be clean, relatively tidy and staff I encountered were friendly and were following Covid measures.

It was a pleasant establishment - I've certainly seen much worse and walked straight out before.

All of the food I ordered arrived on my tray - and in quick timing too.

Some items were cold, or lukewarm, which was very disappointing. But other items were piping hot and filled to the brim - the large chips and the deluxe hot chocolate.

Would I visit again? Probably if I was passing on my way somewhere.

Maybe the moral of this story is don't always listen to those Tripadvisor reviews...

I contacted McDonald's press office for a response to the negative reviews posted on TripAdvisor and to see if any improvements are being made to that particular restaurant.

And they said that customer satisfaction is a "priority of ours" - but the "reviews referenced make up a tiny proportion of the thousands of customers served each day".

A spokesman for McDonald's said: "Customer satisfaction is a priority of ours and we are always disappointed when we hear of any experiences that fall short of our customers’ expectations.

"However, the reviews referenced make up a tiny proportion of the thousands of customers served each day.

"If any customer does have a complaint, we encourage them to either speak to a member of the crew in the restaurant or get in touch with our customer services team.”