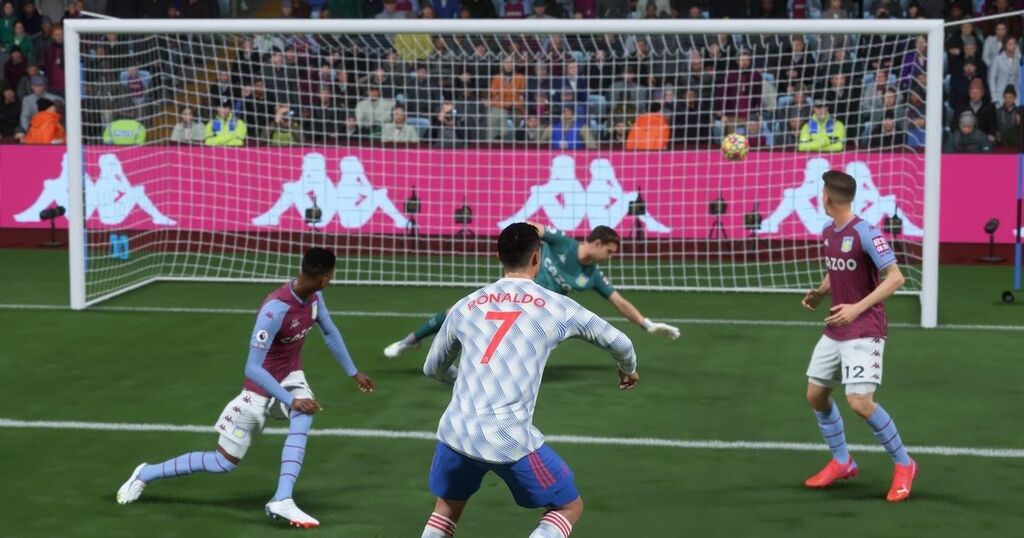 Manchester United face Aston Villa for the second time in a week on Saturday, with the Reds facing Villa in the Premier League.

United progressed into the FA Cup fourth round on Monday after a narrow 1-0 win against Steven Gerrard's side, with an early goal from Scott McTominay proving to be the difference at Old Trafford.

Ralf Rangnick admitted ahead of the fixture this weekend that United are still striving to settle on a formation after a difficult festive period hampered by Covid-19 and injuries.

Rangnick is expected to be able to recall Cristiano Ronaldo, Jadon Sancho, Harry Maguire and Phil Jones back to his squad, but Luke Shaw and Scott McTominay are set to miss out due to suspension.

So, what line-ups will both teams select? And, what could the final score be?

We used FIFA 22 to get a score prediction for Aston Villa versus United on Saturday and this is what happened...

We predict that Manchester United could set up in a 4-2-2-2 formation, with their line-up as follows: De Gea; Dalot, Varane, Maguire, Telles; Fred, Matic; Sancho, Fernandes, Greenwood; Ronaldo.

We predict that Villa could set up in a 4-3-3 formation, with their line-up as follows: Martinez; Cash, Mings, Konsa, Digne; Luiz, Sanson, Ramsey; Buendia, Coutinho, Watkins.

United started the game on the back foot as Villa pressed high up the pitch from the first whistle, putting the likes of Maguire and Varane under a lot of pressure.

Villa's pressure paid dividends as the hosts took an early 1-0 lead through Ollie Watkins, as the Villa striker headed home from a corner past David De Gea in the United net.

Watkins met Emi Buendia's looping ball on the edge of the six-yard box, rising above Fred and Nemanja Matic to power home a clinical header, giving Alex Telles no chance of clearing the ball on the line as United struggled to gain a foothold in the match.

United's response was strong with Bruno Fernandes pulling the strings in midfield, as the visitors looked to find an equaliser quickly.

Just 10 minutes later, United levelled the score at 1-1 after star man Cristiano Ronaldo dragged his side back into the game with a brilliant solo goal.

Ronaldo picked the ball up inside the Villa half before beating two players with some good dribbling and skill, the Portuguese ace played a quick one-two with Jadon Sancho on the edge of the penalty box before Ronaldo whipped the ball into the top corner past Martinez.

Villa's new signings Philippe Coutinho and Lucas Digne started to link up well down the left-wing, and it was this combination that almost lead to a second Villa goal as Coutinho struck the post after cutting inside onto his right foot.

United struck the crossbar in the 70th minute as Mason Greenwood tried his luck from distance, with replays showing that Martinez managed to tip the ball onto the woodwork to keep the score level heading into the final 20 minutes.

Ronaldo's return to the squad proved crucial though, as the 36-year-old showed everyone why he is one of the greatest footballers ever to play the game, popping up in the penalty box to score a 94th-minute winner that saw United snatch all three points at Villa Park.

Sancho managed to cut inside and beat Matty Cash before drilling the ball across the penalty box, with the ball landing at the feet of Ronaldo, who took one touch to set himself, before lashing home a powerful strike into the back of the net to make it 2-1 with seconds to play.

Here are the full-time match stats.

FIFA 22 predicts that United may need to rely on Cristiano Ronaldo to get them out of jail yet again after the Portuguese ace scored twice on his return to the starting line-up, sealing a dramatic win at Villa Park and moving United above Spurs in the Premier League table.

What do you think the final score will be? Let us know in the comments!