We showed how great France are, says Karim Benzema after beating Spain in Nations League Final 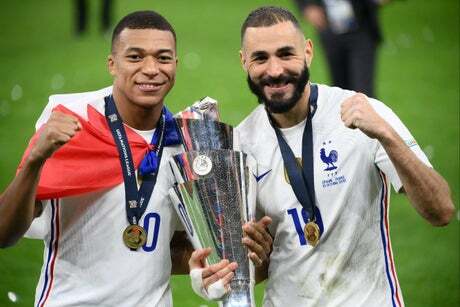 Karim Benzema said France showed their greatness by keeping their cool to recover from a goal down to beat Spain 2-1 and win the Nations League Final.

The world champions fought back from 2-0 down to beat Belgium 3-2 in the semi-final and they were forced to do the hard work again as Spain dominated the first half of Sunday night’s match at the San Siro.

Mikel Oyarzabal's strike gave Spain a deserved lead but France then got a foothold in the game.

Kylian Mbappe found Benzema who cut inside before unleashing a brilliant curling shot into the far corner to make it 1-1.

Mbappe then grabbed the winner, 10 minutes from the end, racing on to a through ball from Theo Hernandez and keeping his cool to slot past Unai Simon.

"We showed our character against a very strong team. We never gave up," said Benzema.

"It shows what great teams do – never panic, be patient and wait for the right time."

Spain protested that Mbappe was offside when he received the ball but the VAR check found a slight touch from defender Eric Garcia had played the France striker onside.

France had goalkeeper Hugo Lloris to thank for two late saves as Deschamps’s side held on for the victory against intense Spanish pressure.

Luis Enrique's young Spain side, who had beaten European champions Italy in the semi-finals, had played their trademark possession football with patience and precision but in the end could not compensate for the absence of a genuine striker.

"It was a difficult defeat," said defender Aymeric Laporte.

"We have proven to be a great team despite our youth, we have shown better football than them, but what counts is the result.”