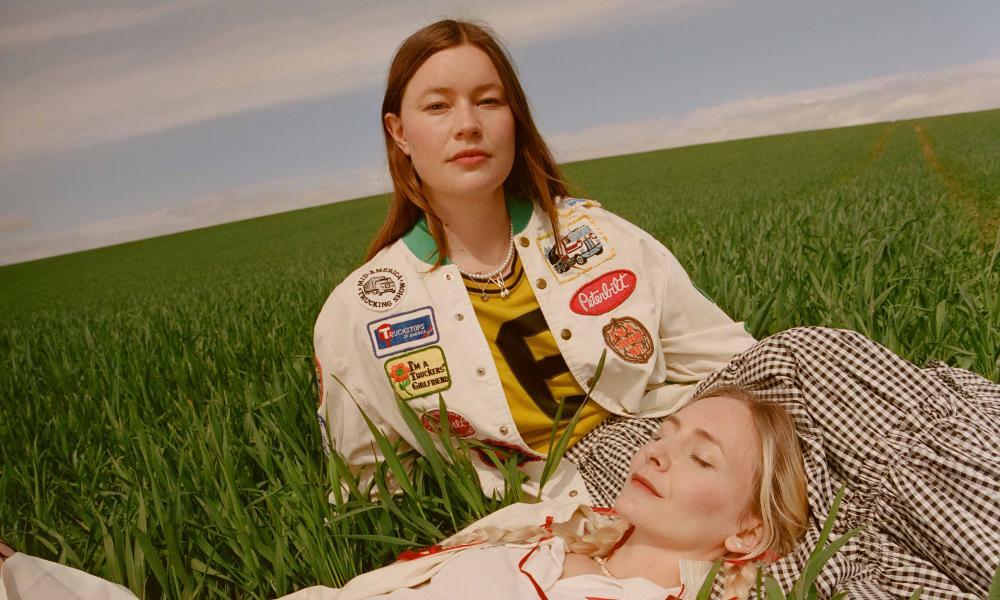 How does a song by an unknown band get to be listened to 6.5m times? It was hard enough to determine in the olden days, before streaming existed, when we still said “popular” instead of “viral”; it is absolutely baffling now. If anyone knew, Facebook would have written an algorithm for it. That hasn’t stopped critics twisting and turning to account for the success of Chaise Longue, by the Isle of Wight duo Wet Leg, which was hotly followed by their astronomically successful follow-up singles, Wet Dream and Too Late Now. They haven’t even released an album yet.

Rhian Teasdale and Hester Chambers, 28 and 27 respectively, talk to me over a video call, which I am not keen on anyway, but on this occasion is about as hilarious, frustrating, charming and elusive an experience as Wet Leg themselves. They are sitting against a glass-bricked wall; there is a dog around, but it never comes into view: it is all pretty indie. Chambers has an incredibly high, quiet voice and she wraps her blond hair around her face like the French Lieutenant’s Woman. Teasdale has the most exquisite, whimsical manners. At one point, a passerby comes up to them to ask whether they are doing a TikTok. “No,” she says, with endless patience. “We’re doing a … conversation.” It is frustrating, because it transpires that they are in Streatham, south London, about two miles from my house. I could have cycled to meet them in less time than it would have taken to ask Chambers to get her hair out of her mouth.

They describe their musical influences, from the time they first met, doing a music BTec on the Isle of Wight: Patrick Watson, Arts the Beatdoctor, “a lot of Nordic stuff,” as Chambers puts it, Laura Marling, And So I Watch You from Afar. “I was able to answer this one really well, because I was talking to my friend about what music we used to listen to when we were 17 and I thought: ‘Wow, I was so zany,’” says Teasdale. Chambers couldn’t disagree more. “Oh my gosh, no! Not that zany’s a bad thing. It’s not really my lexicon. It’s a good word, though.” “Lexicon is also a good word,” says Teasdale.

The lyrics of Chaise Longue are intensely likable (“Is your mother worried? / Would you like us to assign someone / to worry your mother?”), even if all the kids I have met have the wrong end of the stick and think it is a song about academic failure, mixed with some not-so-subtle innuendo: “I went to school and I got the big D.” In fact, the full line runs: “Mummy, Daddy, look at me / I went to school and I got a degree / All my friends call it the big D.” But maybe the kids are perceptive because the pair couldn’t stand academic life. Teasdale only got to the BTec via dropping out of her A-levels. “Just teenage angst, probably. ‘What’s the point?’ I just really didn’t get on with it. I didn’t really have any friends. My mum tried to get me to join the merchant navy.”

Of course, the move was fortuitous, since it was at Isle of Wight College that Teasdale met Chambers, but it wasn’t the start of an academic late-flowering. They both went on to start a music degree, drop out and describe it as a disaster. They can smile about it now, but at the time it was terrible (to quote a band they really don’t sound anything like). “I found it really hard to reject it,” Teasdale says. “I tried to go back again and again, because that’s what you’re fed as the only option, otherwise you’re working a dead-end job. I couldn’t see anything beyond that.”

Chambers, who has a shy, winning fatalism, says: “I dropped out in the first year, which was sad. I was really bummed out. It’s just not what I wanted to put my brain into. I’m not a very academic person.”

The visual narrative they create in two of their videos, Chaise Longue and Wet Dream, seems true to type; Teasdale’s gaze is direct and challenging, Chambers hides under a hat. It reminds me of something, this anti-go-getting, dropping out, failing again, failing better: the 90s, when not everyone was on the same conveyor belt, when no one had heard of self-actualisation. Keeping a knowing distance to preserve an essential self used to be a fundamental currency in pop culture, then it fell away. But I really love it.

Both women grew up on the Isle of Wight. Teasdale’s parents were “boat people”, she says, which makes them sound like yacht owners. In fact, they met in the merchant navy, her father an engineer, her mother … “I don’t actually know what she was doing there.” Chambers’s parents run a jewellers, where Chambers occasionally still works. “It’s such a fantastic job; I really fell into the family business.”

They didn’t start making music together until after they had given up their degrees, when they were 22 and 23. Chambers says to Teasdale: “For me, it was being in the room with you, another woman, and no boys around. That was the moment when I went: ‘Woah, look at us, look at us making music together.’” Teasdale was puzzled that they hadn’t started doing it earlier.

The origin story they have settled on is that they made a decision to start a band at the top of a ferris wheel. But I refuse to ask them about that because it’s just too manic pixie dream girl and I don’t want to encourage that. They are called Wet Leg because they wanted a name they could spell with emojis. Like a lot of their lyrics, it simultaneously makes sense and doesn’t, because those emojis could mean “wet leg” or “tsunami robot” or “rain chicken”. Anyway, that brought them to the summer of 2018, when they got a gig on the local stage at the Isle of Wight festival, playing to “one man and his welly boots”, Chambers recalls.

“We didn’t have enough songs to play a full set,” Teasdale says. “A lot of the performance was songs that we wrote in such a short time to fill up the set. Some of them were just silly songs we wrote so we could get a wristband to go in. Some of them didn’t survive.”

On the attitude this low-stakes period inspired, Chambers adds: “It was fun. We were like: ‘Cool. First, pancakes for the dog – let’s make some more pancakes.’”

What it wasn’t was a clear career path. “I just wanted to do it for the fun of it,” says Teasdale. Chambers carried on working in the jeweller’s; Teasdale did a season selling ice-cream, then went to London – worked at an ice-rink, did a stint as a wardrobe assistant for adverts.

It wasn’t until the pandemic, when they were both back on the island, living with their parents, that they became ambitious in any recognisable sense. Even then, you would only just recognise it.

“It was really sheltered,” Chambers says. “It was dreamy, especially if you remember the weather,” Teasdale continues. “It was like the school holidays when you’re a kid, just thinking: ‘Wow, all this time to play around.’ We took up longboard dancing and roller skating. I’d say we shut out the outside world.” Longboard dancing is as it sounds, dancing on a long skateboard: you have to watch a video to understand how hyper-fey it is, whimsy on stilts.

They were, nevertheless, “productive by accident”, Chambers says, working on demos, making the Chaise Longue and Angelica videos, finding a manager via Teasdale’s then boyfriend, who sent their demo to people at Domino Records, who wanted to meet them. But “we were just absolutely silly”, Chambers says, not without satisfaction. “We were like: ‘Sorry, we don’t have time – we’re just rolling around in the grass doing teddy bear rolls with the guitars.’”

A couple of other labels did manage to persuade them to meet; the pair took them to the Spyglass pub in Ventnor, on the south coast of the island. No offence to the town, which is the indie centre of the island, but this is a brutal way of saying: “We’re not really fussed whether we meet you or not” – it doesn’t even have a train station. Lovely boozer, though.

They ended up meeting Domino in the end, and signed with them in November 2020, but it wasn’t until they played Latitude, one of only a few major festivals to go ahead in 2021, that they realised they were now a legit band. “We turned up, saw Dream Wife about to go on stage, Lucia and the Best Boys, all these really cool people milling about,” says Teasdale. “And we thought: ‘What the hell are we doing here? We’re just little country bumpkins from the Isle of Wight.’

“It was so unexpected that the tent was so rammed. And, even more unexpectedly, we had people actually dancing. And singing – singing the words to Chaise Longue back at us. It was our first time seeing that people had actually listened to it and we’d been in the tiniest little bubble world. It didn’t really compute, initially. It still doesn’t, really.”

Teasdale adjusts the set slightly: “I think we come across as a real band now.” Chambers looks at her, as if to say: “If you like, buddy.”

There remain a few known-unknowns. How will their first album, due for release in April, be received? What toll will gigging take once it is fully up and running again, not fits and starts of cancellation and rebooking? Teasdale says: “Playing more shows, we’re meeting a lot of people who are in a similar position to us, and we’ve had some really nice conversations.” I thought she meant about mediating life’s beautiful futility through synth-rock, but it is more concerning: “What to eat when you’re on the road that’s not a cold Greggs sausage roll. How to pack your suitcase. Stage fright. Mental health.”

Chambers is still based in the Isle of Wight, although only technically, as she is not there very much. Teasdale doesn’t really know where she lives. They give off the strong sense that, ideally, they would go on a world tour just so they don’t have to decide.

But there are also some known-knowns: since they first began, people have really, strongly liked their vibe. That self-effacing but stubborn surrealism, the melodic idiosyncrasy: they have taken their friendship and set it to music.