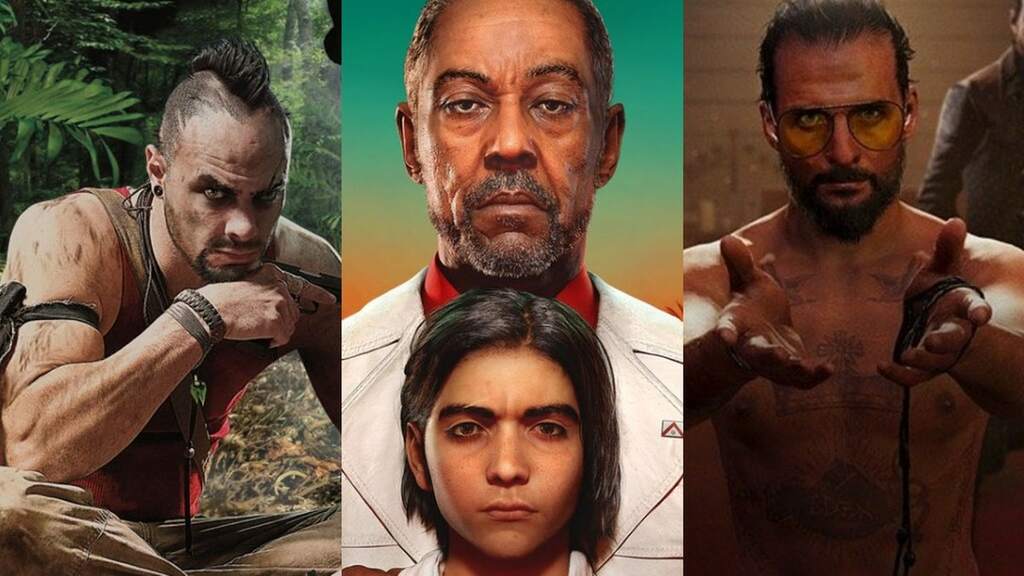 Most video games covers predominately feature the protagonist — it makes sense for the main character to get main character treatment — but this isn’t the case for Far Cry. You see, Far Cry does things differently, with every game cover featuring a villain. And for good bloody reason. No one does baddies like Far Cry.

Far Cry does many things well. On a personal level, every Far Cry game I’ve ever played sits up there on my ‘best games ever’ list. The story, the gameplay, it’s all top-notch — but the standout is always the expertly written villains which drive the whole plotline forward. This is why I’m so fucking keen for October 7 to roll around so I can finally sink my teeth into Far Cry 6, featuring Breaking Bad’s Giancarlo Esposito playing the role of Anton ‘El Presidente’ Castillo.

Over the years, we’ve been blessed with a myriad of strange and maniacal antagonists, and to rank them in order of ‘best to worst’ would be just plain daft, not to mention disrespectful — they’re all great. Instead, we’re going to rank them using the only ranking system that truly means a damn — who’d be best to grab a beer with?

Ahhh Hoyt, sure, the guy dresses snazzy, and he’ll probs get you into some cool VIP sections or whatever, but I guarantee you he’s gonna be one of those freaks that does that lame knife thing where he puts his palm on the table, and starts stabbing the gaps between his spread out fingers. Like, cool bro, very impressive. Well done, gold star.

After a few minutes of successfully avoiding to stab himself, he puts the knife away and takes a triumphant sip of beer. The cute girls who were sitting near you have moved away. You try to order another beer but the bartender is ignoring you. Hoyt is now telling you NFTs are the future, trust him.

Pros: Cool German accent. Cons: Outdated graphics are way too distracting, and his stiff gameplay would mean he spills his beer on you within the first five minutes.

The Jackal would be really fun for the first 10 minutes, but his waxing poetic about the ills of the world will quickly grow stale once you realise he’s basically saying the same thing over and over, and you haven’t got a word in for the entire 10 minutes. He doesn’t care about what you have to say, he hasn’t even touched his beer. He just wants to pensively stare off into the middle distance and jack off to the sound of his own voice.

Drinking with these two would feel a lot like being at a bar with a couple who have been together forever. Big third wheel energy. You’ll try to join in as best you can, but you won’t be on their level of chemistry, nowhere near. Also, you just know they’re gonna talk so much shit about you as soon as you leave.

Citra is one of those annoying people that just exudes cool. It’s effortless to her, everywhere she goes, people pay attention. Go out with her, and you’ll get free drinks all night, hey, you may even get a lot more for free.

And that’s the problem, see, you’ve got work in the morning, and you’re only really down for a couple. You’re getting older now and you don’t handle hangovers like you used to. But Citra is persuasive. She’s very persuasive. You will not be leaving after a couple, you’re going to be out all night, pal. And the next day, she’ll text you to do it all again. And for some reason, you will, you’ll go out again, and again, until you collapse from exhaustion, and she moves on to her next new toy.

At first glance, Joseph Seed ticks all the boxes for the perfect drinking buddy — cool backstory, lots of passion, he’s actually got interesting shit to say, he’s the leader of a doomsday cult — it all shapes up to be the perfect night on the beers. Except, he’s a little too cult leader-y, you know? Like okay man, we get it — the world’s ending and we must cleanse our souls with god’s righteous fire, but like, do you ever clock off?

Drinking with Joseph Seed will be like drinking with one of your mates who does nothing but talk about work. Also, guarantee you he’ll be one of those dudes who corners you in the smokers and goes on this long-ass emotional monologue about his ex. No one cares, Joseph! Get your shit together.

Queen of the ancient fire? The divine matriarch of the ancient Izila tribe? Born during a solar eclipse and deemed descendent of the ancient sun goddess and known to all her followers as the powerful ‘Sun Daughter’? You bet your sweet ass she’d be a vibe. Just don’t get on her bad side.

It may be controversial to some, placing Ull so high on this list, but to those of you who question my judgement I say: when the hell are you gonna get a chance to have a beer with a fkn neanderthal again?? (Besides your mate Kev).

Sure, he’ll probably spend the first few minutes grunting and calling you a softblood Wenja, but trust me, once he wets his ancient lips with a proper ice cold VB, the man will see the light and probably turn out to be super chill, he may even regale you with some cool stories about how that ancient aliens guy with the crazy hair was right all along — ancient world really was full of ancient aliens.

Grabbing a beer with Pagan Min would be such a vibe. Troy Baker, the actor and voice behind Pagan Min, just oozes charisma, and he gives one of his best performances as the magnetic dictator. After a beer or two, Min will look around, and say to you, hey, let’s get out of here, I know a place.

And with that he’ll usher you off to the fanciest bar you’ve ever set foot in, you’ll start to order, but he’ll interrupt you by ordering absinth for the both of you. He’ll also order sashimi, ‘cos apparently this bar serves sashimi. The two of you will stay there all night, he’ll pay for the whole thing.

Look, cards on the table — I’m in love with Faith Seed, so ranking her so far up might be my bias showing. However, I would argue that — my dreams of starting a family with her on a nice farm aside — Faith would be a damn solid drinking buddy.

See, after a couple, Faith will invite you to a cool gallery opening with a bunch of people much cooler than you, after that she’ll take you to a sweet gig at a cool bar you’ve never even heard of, and you’ll end the night at a house party in Fitzroy. Faith Seed knows everyone, and everyone knows Faith Seed. Faith is the key to the city, and unlimited Bliss.

Was there ever really a choice here? Of course Vaas is the number one pick. The dude is absolutely maxed out in both the charisma and insanity chart — deadly combination; the perfect drinking buddy. The two of you will sit down, and you’ll be like “so, Vaas, how’s work?” and he’ll lean in and stare straight into your soul, and say some weird shit like “I am you, and you… are me,” before sculling his whole beer, never breaking eye contact the whole time. There’s no small talk with Vaas, just straight vibes.

I’m sure a beer with this bloke would be eventful as hell, maybe even scary, but I truly won’t know until I’ve really dug into Far Cry 6 and kicked his ass.

The post We Ranked All The Far Cry Villains Based On How Fun They’d Be To Grab A Beer With appeared first on Pedestrian TV.