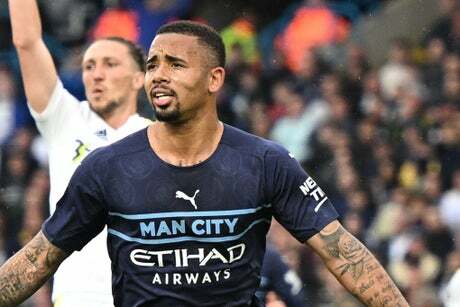 Arsenal in talks over Gabriel Jesus deal, claims Manchester City star’s agent: ‘We like the project’
Arsenal have held talks with Gabriel Jesus’ camp, but appear to face a fierce battle over a deal for the…

Arsenal are reportedly stepping up their pursuit for Gabriel Jesus. It had been widely claimed that the Gunners are chasing the Brazilian forward but now it seems that they are set to push through with a deal.

According to transfer expert Fabrizio Romano, The Gunners are preparing the opening bid for Jesus. Manchester City wants around £50m to sell the forward, even if his current deal won’t be extended.

The Gunners are in desperate need of a striker at the end of the season. And it seems that Edu and Mikel Arteta have identified Jesus as the ideal player to take the club forward.

Romano went on to claim that Arsenal already discussed a transfer with Jesus’ agent. “We like the project.” Marcelo Pettinati told Romano.

As previously reported, the Gunners will target two centre-forwards. football.london understands that City striker Jesus and Roma frontman Tammy Abraham are among the shortlisted profiles who could arrive at Emirates Stadium. Jesus, in particular, remains open to leaving the current Premier League champions, with his representative reportedly holding talks with Edu throughout the past few months.

In November, Arsenal first made enquiries for Jesus, with Edu maintaining a close relationship with the player's agent and the City forward himself. Jesus could get more minutes between now and the end of the season as City look to increase his potential transfer fee, with the Gunners now reportedly required to register a £50m bid.

City's signing of Erling Haaland means that Jesus is likely to become the number two striker at the Etihad next season. At 25, Jesus may prefer to become the main man at a club, instead of being simply a rotational player like he was when Sergio Aguero grabbed the headlines in Manchester.

Arteta and the Brazilian international have worked together before during the Spaniard’s three-year tenure at the club as one of Guardiola’s coaching staff. This adds another incentive to secure his signature and improve the forward line ahead of next season.

Jesus had a 39% goal improvement when he was being coached by Arteta, and it is certainly a relationship the pair could rekindle if the Brazilian decides to join the Gunners at the end of the season. It seems as though Edu is ready to push through with a deal for Jesus.

Gabriel JesusArsenalMikel ArtetaGunnersFabrizio Romano
Sign up to read this article

Arsenal in talks over Gabriel Jesus deal, claims Manchester City star’s agent: ‘We like the project’
Arsenal have held talks with Gabriel Jesus’ camp, but appear to face a fierce battle over a deal for the…