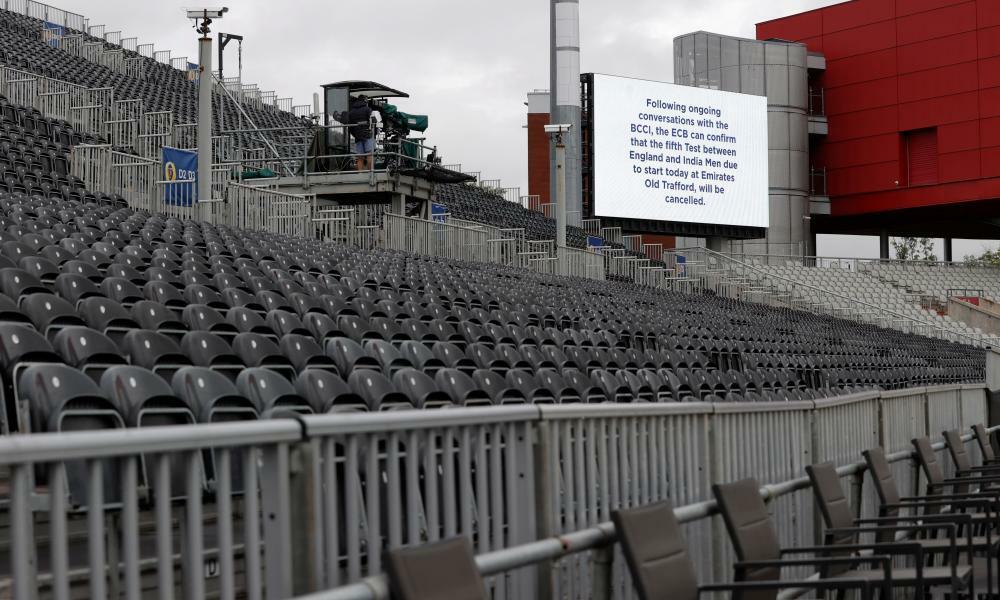 It was a perfect morning for bowling. An autumn sun squinting through milksop skies, a damp wind tickling the flags flying over the pavilion. But there were no bowlers, and there was no Test between England and India. Instead, the groundsmen stood in huddles over the playing surface, watering with abandon – and why not? There are no more matches at Old Trafford this season. In the concourses, the fans mulled over what might have been: swinging between bafflement, resignation and disappointment. Was it Covid? Was it the IPL? Was it the players?

Anup, here with friends, had travelled from Preston. “It’s a bit shocking, we were looking forward to this match for a long time. It is not an easy process to buy tickets. Once you get a ticket, it’s like winning the lottery, and then arranging a day off and all the other things. I’m heartbroken. The schools are open and if one child is Covid-positive, only one child is isolating, not the whole class, and I think that rule should apply here.

“That match should have gone ahead. The players are all negative, they could have played. We had a few friends coming from India, I hope they’ve got the news. There should be a statement for the fans from both teams – it is devastating.”

On a picnic bench, Aidan, six, and Isabelle, eight, were getting stuck into ice creams. The Robertson family had driven up from the south-west on Thursday, it was only their second trip out of Dorset in nearly two years. They had tickets for all five days.

Their dad, Lee, was resigned. “The hotels in Manchester were booked up so we had to book two nights in hotels in Leeds. It is too late to cancel everything – it is probably going to cost me £500-600 in hotel expenses.

“In a way I’m not surprised, you kind of had a sense that India didn’t want to play because of the IPL, and then the news that there were a few cases within the coaching staff. It’s disappointing. You feel that if none of the players tested positive, they could have played the match. Let’s look on the bright side, it’s a change of scenery.”

Meanwhile Bakhtawar, Jorge and Drew were mulling the loss of earnings. Employed for all five days to work at the bars and serve food, they were now going to pick up only four hours of pay; while Lanky the giraffe wandered about, his huge head lolling, hugging lurking waifs and strays. At the jacket potato stand, they pondered what to do with 200 ready-cooked spuds, with 400 more foiled up and ready to go.

Peter, Geoff and Roger, old friends from Hebden Bridge, Liverpool and Manchester, had originally bought the tickets in 2019 for the Pakistan Test in 2020, which was played behind closed doors because of Covid. They had nothing but praise for Lancashire, who had transferred the tickets to today’s match, but were unhappy with the last-minute cancellation. “It is diabolical,” said Peter. “We should sue the Indian board for every rupee we can on the basis of what we understand has happened.”

A shaken-looking Daniel Gidney, the Lancashire chief executive, came up to the press box. The club had sold out the first three days of the Test, with just a few tickets left on the fourth day, and were now refunding every ticket. A club that had built up reserves, then ravaged by Covid, were now expecting a seven-figure loss. The one good news story was that unused food was going to local charities.

Oh, and one other. Jonny Wright and James Engals were about to turn on their heels and head back to Leeds, when someone shouted that the beer that should have been £5.75 a pint had been reduced to a quid. And so the season ended, not with a bang but a bitter.