‘We are party of low taxation,’ says Johnson after tax rise 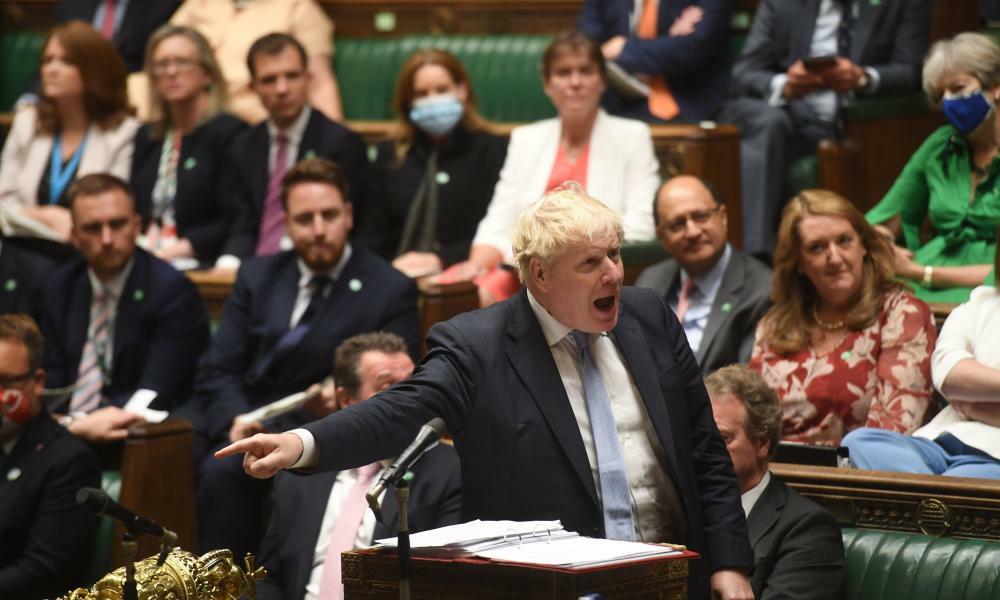 Boris Johnson has told his backbenchers the Conservatives remain the party of low taxation, a day after announcing a manifesto-busting £12bn package of tax increases.

Addressing a raucous meeting of the backbench 1922 Committee shortly before MPs were due to vote on the controversial plan, the prime minister said, “We should never forget, after all we’ve been through, that we are the party of free enterprise, the private sector and low taxation.”

The Institute for Fiscal Studies thinktank has said the rise in national insurance contributions (NICs) from next April will take the UK’s tax burden to its highest ever sustained level.

Johnson also sought to stress the role of the private sector in continuing to provide social care, and potentially insuring patients against the future costs of care, once the £86,000 ceiling has been introduced.

Earlier, the veteran Tory MP Peter Bone had challenged the government, saying: “This is what Labour would be doing in power, so why are we doing it as Conservatives?”, while the High Wycombe MP, Steve Baker, compared the policy to socialism.

But despite such concerns, Johnson’s backbench troops greeted him enthusiastically, banging the tables in the House of Commons committee room, as rumours of a reshuffle helped to restrain potential rebels in the snap vote on the health plan.

Senior figures tipped for a move if Johnson reshapes his top team include the home secretary, Priti Patel, whom friends say would resist leaving her department; the gaffe-prone education secretary, Gavin Williamson; and the Cabinet Office minister, Michael Gove.

Kemi Badenoch has been touted as a successor to Williamson. One senior Tory said she had been pushed in the past for the role by No 10 advisers keen to pursue an “anti-woke” agenda.

The leader of the House of Commons, Jacob Rees-Mogg, could be shifted into a ministerial post in the Treasury, some Westminster insiders believe, potentially opening up his role for the Tory chair, Amanda Milling, who appears to have fallen out of favour.

A No 10 source insisted a reshuffle was “not imminent”, ruling out Thursday; but government insiders say it could still come before the Conservative party conference in early October.

With Johnson expected to fly to New York for the UN general assembly in less than a fortnight’s time, that would effectively mean in the next 10 days.

One Tory source said: “I think really only Dan and the prime minister know,” referring to Johnson’s chief of staff, Dan Rosenfield, whose own position is widely viewed at Westminster as shaky.

Briefing packs compiled by departments to induct new ministers were recently refreshed and office space in No 10 had been booked out on Thursday in what insiders said appeared to be preparation for a reshuffle.

But government insiders said the likelihood of a major reshuffle was diminishing. A seasoned ex-CCHQ staffer said they wouldn’t put it past Downing Street “to make all of these arrangements just to quash the possible national insurance rebellion”, and added: “They’re very good at misdirection when they want to be.”

A senior Whitehall official admitted it looked like a “smart bit of arm-twisting” and that it was now a case of “eyes on next week”.

Just a handful of Tory MPs had earlier openly opposed the health and social care plan in the House of Commons, during several hours of debate in Commons.

The Northern Research Group chair, Jake Berry, called the increase in national insurance contributions a “jobs tax”, and fretted about the impact on his constituents.

Baker said: “We’ve got no better ideas than putting up taxes to raise more money for public services,” claiming the policy marked “the beginning of a generational crisis”, in which governments would struggle to meet costly promises made to voters.

“Down that road is ruin; we all know that eventually as socialists you run out of other people’s money,” he said. Baker said he could not back Johnson’s plan because, “some of us are going to have to be seen to be standing for another path”.